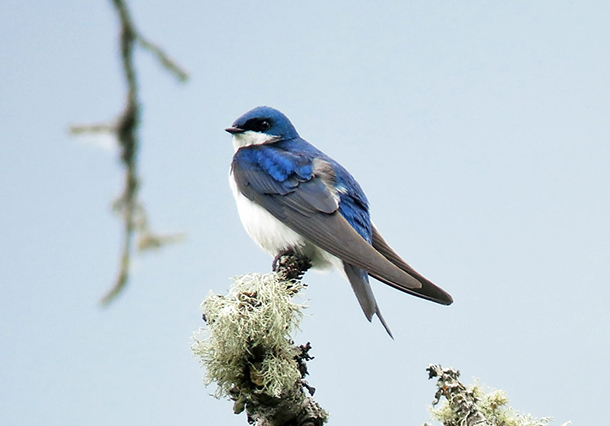 During the Northern Hemisphere’s summer, tree swallows inhabit much of the Western and Northern United States and most of Canada. But come fall, these birds migrate to the Gulf Coast, the Caribbean, and Central America. (Photo: Mike Hamilton, CC)

On September 22 Fall arrived in the Northern Hemisphere, and millions of singing Tree Swallows will soon fly south. But for now, explains BirdNote’s Mary McCann, these summer performers are staging their final shows of the season.

CURWOOD: Here on the east coast of the US the autumnal equinox came shortly after four in the afternoon on September 22, and the days are growing noticeably shorter. But many of the songsters of summer are still with us and as Mary McCann points out in today’s BirdNote, they continue to put on spectacular shows.

As the sun sets over the Connecticut River, an astounding natural spectacle unfolds. As many as
300,000 sparkling blue swallows—Tree Swallows—wing their way from miles around, to roost for
the evening on Goose Island, near Old Lyme.

The birds gather on the wing in one immense, tightly choreographed flock, a swirling mass that
changes shape from one second to the next, like an immense silken banner or plume of smoke racing
with the wind. With dusk at hand, the aerobatic flock – now shaped like a tornado – swoops down into
the island’s tall reeds. It takes but 15 seconds for the 300,000 birds to vanish into the marsh, where they
remain until dawn. 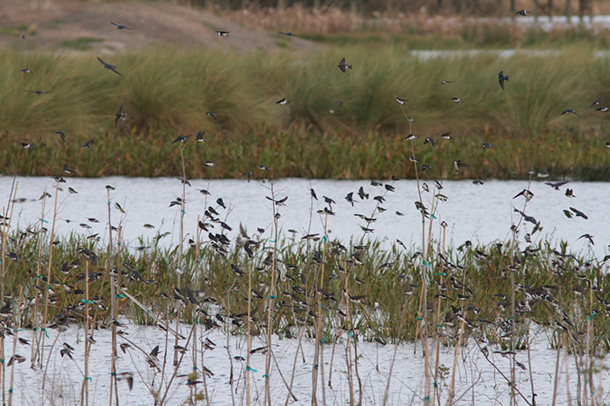 Tree Swallows travel in massive flocks. On a recent, late-summer evening, around 300,000 of them gathered from miles around to roost on Goose Island in Connecticut. (Photo: Dan Irizzary, CC)

Roger Tory Peterson, dean of American birdwatching, wrote of the swallows: “I have seen a million
flamingos on the lakes of East Africa and as many seabirds on the cliffs of the Alaska Pribilofs, but for
sheer drama, the tornadoes of tree swallows eclipsed any other avian spectacle I have ever seen." *

Soon all of Goose Island’s swallows will disappear below the southern horizon for the winter. But
witnesses will long remember the autumnal spectacle of the birds’ massed flight.

CURWOOD: And for photos, try our roost, the website loe dot org.


The story about the tree swallows on the BirdNote® website

Cornell Lab of Ornithology: About the Tree Swallow