Science Note: The World’s Most Common Language, It Seems 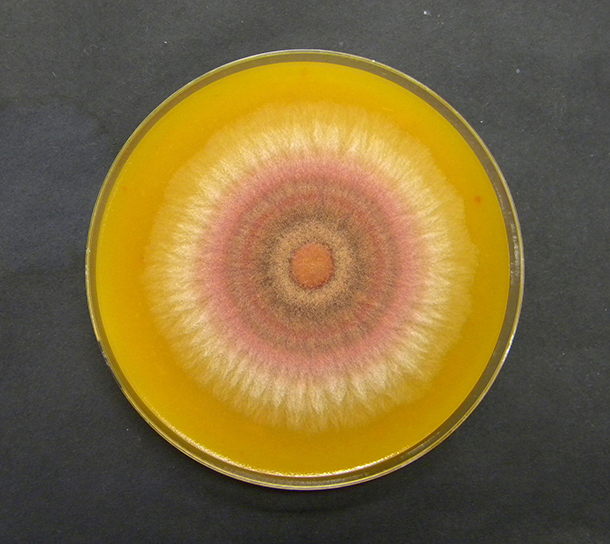 Though this Fusarium fungus may not look especially chatty, it actually engages in active discussion. Researchers from the Netherlands Institute of Ecology have discovered that Fusarium release chemical fragrances called terpenes to communicate with bacteria. (Photo: Oregon State University, Flickr CC BY-SA 2.0)

Breaking language barriers can be difficult for even the most talkative humans. But as Living on Earth’s Noble Ingram reports, a new study from the Netherlands Institute of Ecology has found that trillions of microorganisms communicate effectively through scent signals - all without making a sound.

CURWOOD: It’s Living on Earth, I’m Steve Curwood. In a moment, how the proverbial chicken in every pot became so cheap and potentially deadly, but first this note on emerging science from Noble Ingram.

A sweeping variety of organisms use chemical fragrances called terpenes to communicate. Now, a research team from the Netherlands Institute of Ecology has found new evidence linking microorganisms to this silent language.

For years, scientists have known that plants and insects use terpenes to send signals, as mammals do with pheromones. But the research team discovered that smelly messages are also exchanged between microorganisms, including fungi and bacteria. The new findings add trillions of life forms to terpenes’ list of fluent speakers.

In the study, a fungus called Fusarium produced terpenes that were picked up by a neighboring soil bacteria called Serratia. The Serratia then responded, expelling their own scent signals that were crafted specifically for the Fusarium. What exactly was being communicated remains unclear but the team says the interaction was a recognizable call and response.

While humanity struggles to bridge language gaps within its own species, these tiny lifeforms have been chatting with each other across phylogenetic domains. But despite our limited linguistic abilities, we might unknowingly be joining the conversation. Terpenes are also popular ingredients in perfumes. These biochemicals provide natural notes, like juniper, lemon, and eucalyptus to an aromatic blend.

So next time you catch a whiff of fancy cologne, consider it a ‘hello’. After all, plenty of microorganisms do.


The microorganism communication study in the journal Nature

Netherlands Institute of Ecology: “The world’s most spoken language is… Terpene”