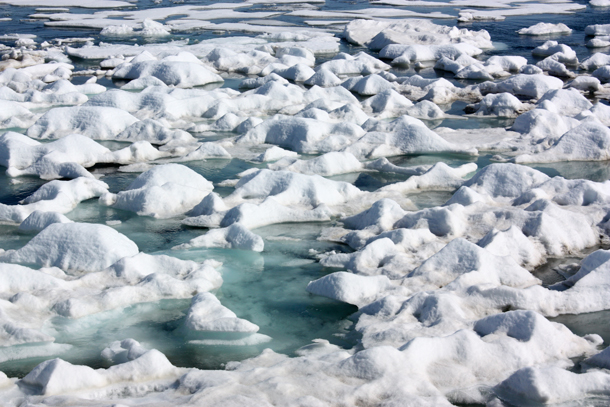 In the Arctic spring, ice melts, revealing any solid debris trapped in the winter. Scientists recently discovered sizeable chunks of plastic waste on ice only a few hundred miles from the North Pole. (Photo: NASA Ice, Flickr CC BY 2.0)

This week, Peter Dykstra and host Steve Curwood discuss recent reports of polystyrene trash in ice only a few hundred miles from the North Pole, and note the steady recovery of the huge endangered leatherback sea turtle. Then they remember the mystery of the Mayak nuclear disaster in Russia. Though it was the third largest nuclear accident in history, it was kept secret for more than 30 years, and is still mysterious today.

CURWOOD: It’s Living on Earth, I’m Steve Curwood. Time now for a look beyond the headlines, with Peter Dykstra, on the line from Brookhaven, Georgia. Peter’s with Environmental Health News, EHN.org and DailyClimate.org. Hi there, Peter.

DYKSTRA: Hi, Steve. An international research team reports finding what they call "sizeable chunks" of polystyrene in the melting ice only a few hundred miles from the North Pole.

DYKSTRA: Dirty sweep indeed. With plastic patches floating in all the world's oceans, the Great Lakes too, and the Great Pacific Garbage Patch now said to be the size of the nation of India, our love of plastic products and plastic packaging is coming home to roost.

CURWOOD: And I guess there's really no solution for the literally billions of tons of plastic from tiny microbeads to fishing driftnets, so I hope you can offset that news with some good news today. What do you have next?

DYKSTRA: Well, I do have some good news involving one of my favorite animals: leatherback turtles, and their sea turtle cousins. Not to postpone the good news, but let me tell you about leatherbacks. They’re awesome because they're huge – they’re the biggest sea turtle species, with dark, leather-like shells with white stripes that make them look like marine Volkswagen beetles. 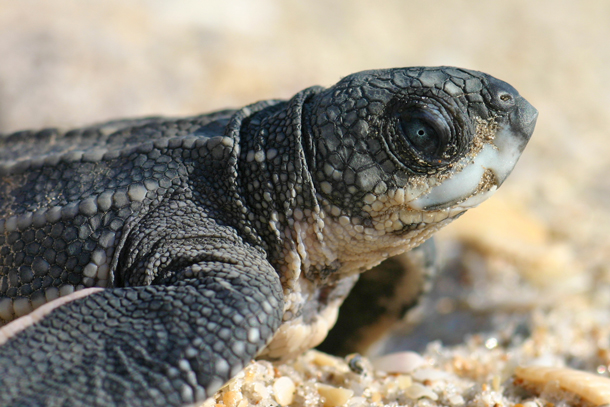 CURWOOD: OK, and the good news?

DYKSTRA: Efforts to save turtles by changing fishing nets, revised fishing methods, decline in sales of turtle shells for jewelry, and creating protected and darkened beaches for egg-laying are working, says Antonios Mazaris, who studies sea turtle mortality for Aristotle University in Greece.

CURWOOD: Well, that is some surprising good news given the assault on our beaches and oceans. Hey Peter, finally, as always, what do you have for our weekly trip through the environmental archives?

DYKSTRA: Well, sixty years ago this week in Russia's Ural Mountains, there was an explosion in a radioactive waste storage tank near the nuclear weapons complex at Mayak. Sixty years later, all the details still aren't known – the rest of the world didn't know Mayak existed, and the towns built to serve the complex couldn't literally be wiped off the map because the Soviets had never actually put them on the map in the first place.

CURWOOD: So you’re telling me that Mayak and the communities surrounding it weren't known to the rest of the world?

DYKSTRA: So secretive was this whole operation – it was a key site for Russia's building its own H-bomb – that Mayak wasn't even known to other Russians. There's no formal death toll, we know little about the fate of the towns around Mayak. The first real info on the accident came from a Russian dissident scientist, Zhores Medvedev, nearly two decades later. Apparently, the waste storage tanks contained ammonium nitrate. 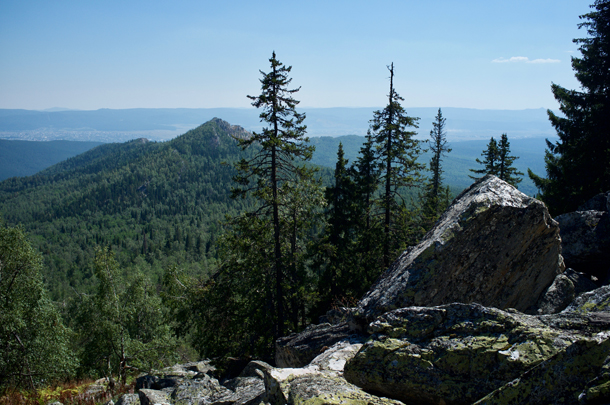 The Ural Mountains in Central Russia are home to the Mayak Nuclear Facility. In 1957, the site experienced one of the worst nuclear accidents ever in history, but Russian officials kept it secret for more than three decades. (Photo: Aleksandr Zykov, Flickr CC BY-SA 2.0)

CURWOOD: Uh, I think that’s the stuff, it’s fertilizer and it was used to blow up the Oklahoma City Federal Building in 1995.

DYKSTRA: Absolutely correct, but, mind you, this was radioactive ammonium nitrate. To this day, information on the Mayak disaster is still sketchy, though it's believed to be the third largest nuclear accident in history, following the two nuclear power plans at Chernobyl in the Ukraine in 1986 and Japan's Fukushima disaster in 2011.


The Guardian: “How did that get there? Plastic chunks on Arctic ice show how far pollution has spread”