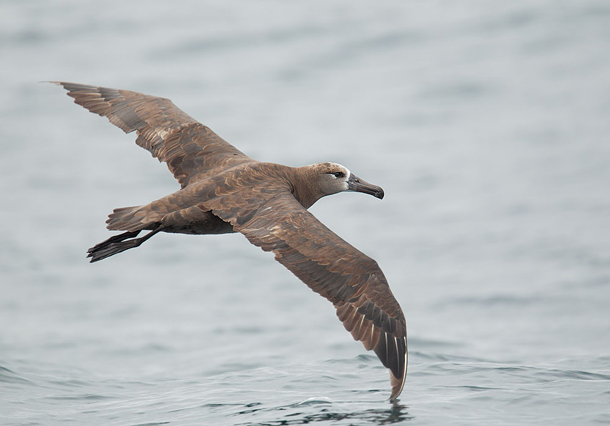 The Black-footed Albatross uses wind currents and shifts in air pressure to fly for hours over the Pacific Ocean while barely needing to flap its wings. (Photo: Tom Grey)

Seen from land, Black-footed Albatrosses look like tiny dark dots floating above the Pacific Ocean. But, as Birdnote’s Michael Stein explains, these large, graceful, ocean-faring birds are now headed to Hawaii to raise their one huge chick, that looks for all the world like a grey fluffy cousin of Sesame Street’s Big Bird.

CURWOOD: We head out to sea for today’s BirdNote, to catch up with some of the most magnificent of the pelagic creatures off our shores. But as Michael Stein points out, though the adults may be glorious and graceful birds, the infants are, well, downright dumpy.

Just a couple of dozen miles off the Pacific Coast, immense, dark birds with long, saber-shaped wings glide without effort above the wave-tops. These graceful giants are Black-footed Albatrosses, flying by the thousands near the edge of the continental shelf.

Albatrosses arc and coast over the ocean for hours with hardly a flap of their wings. Making the most of wind currents and shifts in air pressure, these wondrous seabirds seem to levitate over the water.

Black-footed Albatross numbers peak off the coast in summer. Many adults return to the Hawaiian Islands during our winter and spring, to court and nest on sandy islands. 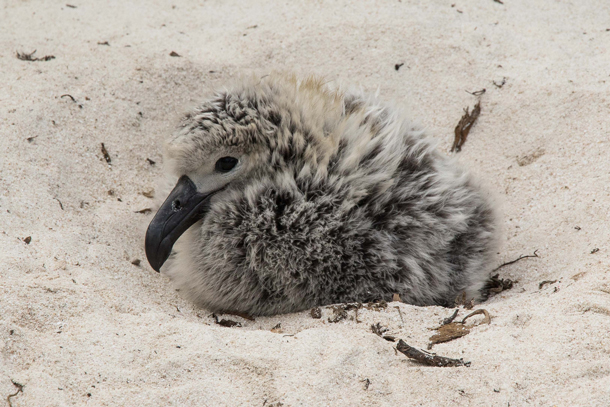 Albatross parents travel hundreds of miles to collect food for their nestlings, which are raised one at a time and grow to be massive. (Photo: Eric VanderWerf, US Fish and Wildlife Service, CC)

In Hawaiian waters, the Black-footed Albatross collects squid and masses of flying-fish eggs with its long, hook-tipped bill. Adult birds may fly hundreds of miles at sea to provide food for the single, goliath nestling, which looks more than a little like a portly, gray, recumbent version of Big Bird.

CURWOOD: Glide on over to our website, loe dot org for some pictures.


The “Black-footed Albatross, Graceful Giant” story on the BirdNote® website

Cornell Lab of Ornithology: About the Black-footed Albatross