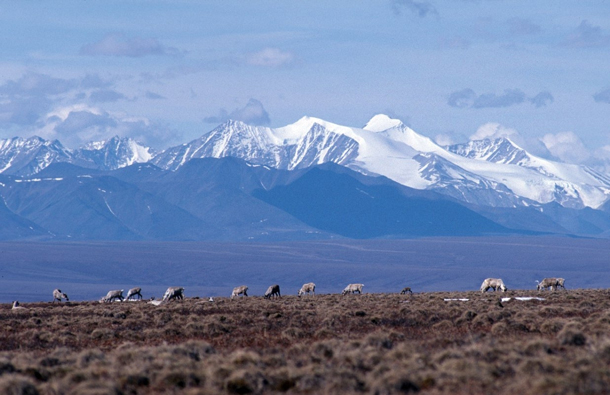 The Porcupine Caribou herd is one of many species that rely on the coastal plain section of the Arctic National Wildlife Refuge to breed and migrate through. (Photo: U.S. Fish and Wildlife Service, Flickr CC BY 2.0)

Fierce debate over drilling for oil in ANWR, the Arctic National Wildlife Refuge is decades old. Now the possibility is closer to becoming a reality, with a rider on budget measures passed by the U.S. House and Senate. Host Steve Curwood discussed the developments and drilling prospects with Alaska Dispatch News reporter Erica Martinson.

CURWOOD: The massive Arctic National Wildlife Refuge, ANWR has the largest variety of plant and animal life of any protected area north of the Arctic Circle, including vast herds of migrating caribou, as well as countless birds, wolves, muskoxen and grizzly bears. But seismic tests also promise billions of barrels of oil under ANWR, and the US House and Senate have now advanced separate budget resolutions that would effectively open up its pristine coastal plain to drilling. Efforts to open ANWR have gone down to defeat many times since the 1980s, but this year could be different.

To untangle what’s going on, we called up Erica Martinson, Washington DC-based reporter for Alaska Dispatch News. Welcome back to Living on Earth, Erica.

CURWOOD: So, first describe the Arctic National Wildlife Refuge for us, especially what is known as section 1002.

MARTINSON: Well, the refuge commonly known as ANWAR, is in the far north of Alaska, and it is 19 million acres large. I mean, this is no small place. The 1002 area, that refers to a section of the law in the Alaska National Interest Lands Conservation Act, it’s one and a half million acres. A small section of is believed to have a great amount of oil there, and when they set aside the refuge for protection in 1980, the law sectioned off this small bit, the 1002 area saying that maybe in the future there could be drilling there, but first we need to check it out, you need to decide how much is there, then you need to do an environmental impact statement, and then it's going to take an act of Congress, and that last part, the act of Congress has been something that they've been fighting over for the last three to four decades now.

CURWOOD: Now, I understand with the question of drilling in the Arctic National Wildlife Refuge back on the table that the indigenous folks there, the Gwich’in have come to Washington to make a point. What are they saying is the problem for them?

MARTINSON: Well, they visit quite often because this fight is always going on for Alaskans. They say that this is a sacred land and that there should never be any drilling there, and they're worried about going into areas that mean a lot to them as native Alaskans.

MARTINSON: Right, as it turns out it says nothing about ANWR, it says nothing about drilling. What's going on is a lot of listeners may be now familiar with the budget reconciliation after the Senate recently attempted to use the fiscal year 2017 reconciliation to pass health care reform. Their next plan is now for the 2018 budget reconciliation to pass tax reform. By using this, they set up a budget that shows just the basic outlines of where they're going to get what money, and that only requires a simple majority. They don't need a filibuster-proof number of senators to vote for it, which is a tough call these days in the Senate as there are only 52 Republican senators. They just need 51 to pass anything that they've got done on the budget resolution. Turns out that wasn't enough for health care, but we'll see how it goes for tax reform. So, this is just a provision that's going to change the political calculus here because it's not fully about ANWR, this is going to be about tax reform and about whether or not ANWR is a big enough issue to pull away some Republicans. 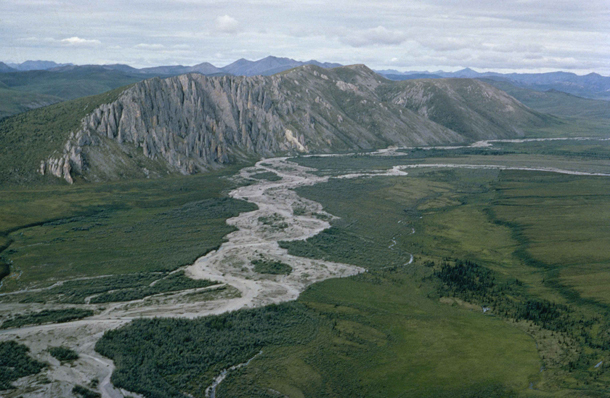 The Arctic National Wildlife Refuge is a 19-million-acre area of protected land in northern Alaska. The refuge, which is projected to have billions of barrels of oil lying beneath its surface, has been the focus of contentious debate about whether to allow drilling for that oil. (Photo: Thayer A. / U.S. Fish and Wildlife Service, Wikimedia Commons public domain)

CURWOOD: So, Erica, tell me, how could these budget resolutions lead to oil drilling in the Arctic National Wildlife Refuge?

MARTINSON: Well, in both the House and the Senate the resolutions offer instructions for committees to find revenue. In the House, they asked the House Natural Resources Committee, that's Alaska Congressman Don Young's home committee, to find five billion dollars in revenue. They say that they're going to do that through a provision that allows drilling in ANWR. In the Senate they've asked Alaska Senator Lisa Murkowski's energy natural resources committee to find one billion dollars in revenue, and it's well known to everyone around on Capitol Hill that her number one way for doing that is going to be drilling in ANWR.

CURWOOD: By the way, how could drilling in the Arctic National Wildlife Refuge generate that kind of money for the federal budget? If you're going to raise a billion dollars, you know a medium lease is, what, 30 or 40 or 50 dollars proposition on the land. How do you get to a billion dollars even? Certainly how to get to $5 billion?

MARTINSON: There's certainly some question about that, especially since the last time they did any real seismic testing in the area to see how much oil we're talking about was in the '90s. About 10 years ago, the National Budget Office projected that drilling in ANWR could raise about five billion dollars for the federal government, and so that's part of what they're going off of. Now, those numbers obviously were at a time when oil was worth a lot more. Your cost per barrel now is not going to get anywhere near that, and so I think that's where they scaled it back on the Senate side and said we could do one billion. So, it's definitely a volume issue.

CURWOOD: What do you see as the political factors at play in terms of this budget resolution ultimately being passed or not?

MARTINSON: Well, there's definitely plenty of opposition in the Democratic Party, but they're opposing this tax bill anyways. So, the question is, where your Republican senators who have been opposed to ANWR drilling in the past are going to land and whether or not this provision is important enough to them to tank tax reform. Now, I talked to Alaska senator Dan Sullivan recently and I asked him, “What are you telling your colleagues about this ANWR fight? What are you doing to try and convince them that they should do this now?” And he was telling me they the fight he's making now is that things have changed in the last 20 and 30 years. When we were originally talking about drilling in ANWAR, the footprint of these oil drilling operations was much larger, and with things like fracking now, you're looking at a much smaller oil heads, you're looking at a less impactful process, doing less to the surface of the land to get to what's underneath it, and also the argument that there are drilling operations only a couple of miles away from the 1002 area of ANWR. 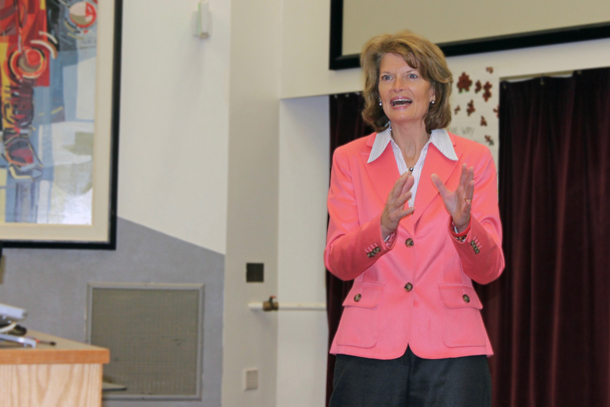 CURWOOD: So, today's oil price is relatively low. Why are proponents of drilling in the Arctic National Wildlife Refuge pushing for it now when it's questionable how economic it would be?

MARTINSON: Well, the answer to that is because they're pushing forward always.

It's not the best time obviously, financially, but they say that this is the biggest chance they have. You know, Republicans have the House and the Senate and the White House and a president who has very clearly said he wants to open up Alaska for oil drilling, open it up for business, and the Senators and Congressman from Alaska have been trying to do this for decades. It's been something that they've never backed away from, and if they have an opening they're going to take it.

MARTINSON: Well there are I think 40 Democrats who joined in on a bill earlier this year in the Senate arguing that they should never open up ANWR. There are some Native groups in Alaska who are opposed to it and they argue that this is a sacred area for many Native people, and they argue that it's a very key environmental area, that if you were to go in and drill oil that you're just not going to get it back, that this was set aside by Congress for a reason, and we shouldn't go back on that.

CURWOOD: So, Arctic National Wildlife Refuge is considered the largest remaining wild part of America. So, what are the potential environmental impacts of drilling for oil there?

MARTINSON: Well, they’re the impacts that there are always for drilling. You're going to have to disturb the area with human activity, with trucks, with moving things towards a pipeline. They're talking about pulling out up to 16 billion barrels of oil, so it's not without impact on the animal and wildlife there, particularly the Porcupine caribou herd, and if you interrupt that area it could have a serious detriment to the environment there, and to subsistence living for the Natives that live there.

CURWOOD: To what extent do opponents make the "keep it in the ground" argument, that in this age of climate disruption as a year that we've seen some crazy storms and fires that it makes no sense to go get more oil when there's already plenty available.

MARTINSON: That's certainly a big part of the argument. I mean, it's not projected that taking this oil from ANWR will actually affect the world oil price even. We're not talking about an amount that is life changing for most Americans at the pump. It could make a big difference for Alaska's economy but not outside of the state necessarily, and if you're looking to avoid drilling more oil and adding to the problem of climate change then it doesn't make sense for you to open up more areas or oil. To the contrary others argue that Russia is expanding its Arctic drilling, and if you don't allow companies to do it here they'll do it there.