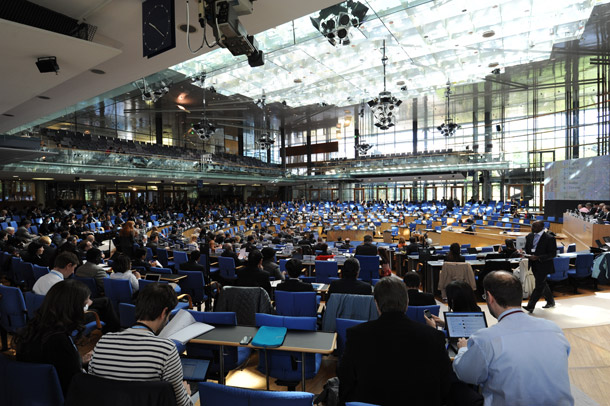 Thousands of leaders from every sector of society around the world turn out for UN climate conferences. (Photo: UNClimateChange, Flickr CC BY 2.0)

Delegates from more than 190 nations begin meeting in Bonn, Germany November 6th to work on implementation of the Paris Climate Agreement during the 23rd annual meeting of the UN Climate Convention. The nation of Fiji is president of this meeting called COP23, which also includes a major civil society and business gathering focused on fighting global warming. With the US stepping back, Living on Earth Host Steve Curwood discusses the new leadership role for China and the objectives for COP23 with UMass Boston global governance expert Maria Ivanova.

The 23rd Conference of the Parties to the UN Framework Convention on Climate Change -- or COP 23 in UN jargon -- kicks off November 6th in Bonn, Germany, under the leadership of Fiji. President Trump wants to pull the US out of the historic 2015 Paris Climate Agreement, the first accord to include worldwide emissions reductions. Yet US diplomats will still be involved at Bonn, as the world’s nations seek to implement the Paris commitments.

Maria Ivanova, is an expert in global governance at the University of Massachusetts, Boston, and she joins us now. Welcome to Living on Earth.

IVANOVA: Thank you very much.

CURWOOD: So, the beginning of November brings the Conference of the Parties, number 23, of the United Nations Framework Convention on Climate Change. What do you think is the potential for this meeting in terms of making constructive progress on, say, the commitments that nations have signed up for under the Paris Climate agreement?

IVANOVA: So, it's important to note that this particular meeting is not one about political agreements. It is a technical meeting. It's about technical agreement. So, the Paris COP was about political agreement, and so you gathered a lot of heads of state and had to make big political progress. This one is about the implementation of the Paris Agreement, so by definition it will aim to have constructive progress. I think the prospects are real that that can be achieved because the issues are very concrete. Countries will now have to negotiate how to do global stock-take. This is one of the key features of the Paris Agreement, for example, that every five years countries will gather and assess what they have implemented so that they could ratchet up their commitments. But how do we take stock of this? Countries don't know yet. They have to negotiate it. 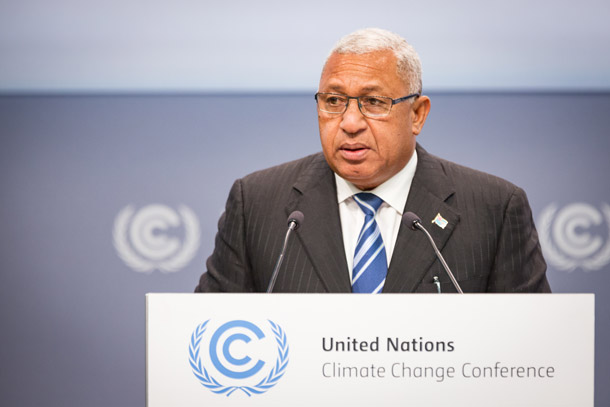 Right Honorable Frank Bainimarama, Prime Minister of the Republic of Fiji, at the COP 23 preparation meeting in May. (Photo: UNClimateChange, Flickr CC BY-NC-SA 2.0)

CURWOOD: What's interesting about this meeting is that the chair of these meetings rotates among countries. Fiji, which is a small island state, is actually the chair this time, but they're doing it in Germany, I guess for logistical reasons.

IVANOVA: Indeed, any country can be the chair and usually hosts the conference in their country. One would expect that everybody will be going to Fiji, but we all know what we are pushed to do to reduce our impact on climate change. We have to emit less. Where most of us working in these, on these global issues emit most is through airplane travel, and these conferences gather an extraordinary number of delegates, in the thousands, not only from governments but also from companies, from civil society, anyone who cares about these issues descends upon the city where this conference convenes, and so the thinking was, no, we cannot host that many delegates for that long. It's usually two weeks. It is not only the carbon emissions, but it is also the impact on the local ecosystems, the pressure that that many people put on a fragile environment, so I think Fiji is sending a very powerful signal that we realize what the issues are, and we're ready to work with them but we're not giving up our position as leaders of these issues.

CURWOOD: What in particular do you think will come out of the UN climate summit there in Bonn because Fiji is in charge?

IVANOVA: What is really important to watch is the grand coalition that the Prime Minister of Fiji is about to announce. He talked at the UN General Assembly, urging for not only countries but also companies, civil society, individuals to unite into a grand coalition to implement the commitments, and I think this will be the qualitative change from what we have seen before. All of these conferences have been government driven and aimed at governments.

Therefore, we are startled when one government wants to withdraw, yet, if we have this grand coalition, if the vision of Fiji actually gets realized, we will have everybody act just like they gathered in Paris. I think then this kind of vulnerability will transform into strength.

CURWOOD: So, this is a year where we've seen hurricanes, floods, fires that hit everywhere from Houston to the Caribbean to Bangladesh. How do you think these climate and weather related disasters will affect behavior at this conference?

IVANOVA: We have indeed seen a lot of disasters this year, and I think they have exposed clearly the heart of the matter. Climate change is happening. It is real. It is here, and it affects all of us. The narrative used to be developing countries are most affected. It still is true. They are most affected, but all of these disasters have touched us deeply all around the world, so I think there will be ever more reason for countries now to commit to that constructive progress, but unfortunately the vacuum of leadership that the United States now presents at this conference will be felt, but it will likely not remain a vacuum for long. It will be filled most likely by China.

Fijian canoe arrives in Bonn as a symbol of resilience and unity 4 #COP23 https://t.co/80wHPtWeXC An example of Fijian skills and ingenuity pic.twitter.com/rQx5Dg1B9z

CURWOOD: Let's talk about the United States' role. So, under the rules, while President Trump said he wants out from the Paris Climate agreement, in fact, takes until 2020 to be literally out, we have a delegation going. Who are they and what are they expected to do?

IVANOVA: So, the United States has to send a delegation. It still is a party. The US delegation will be led by Tom Shannon who is the Under Secretary of State for Political Affairs. Another important member of the delegation will be Trigg Talley, who is the Director of the Office of Global Change at the State Department and who has been a very important negotiator in all of the climate change negotiations to date. So, in a sense the US delegation will operate in a constrained space. It will not have the same political bandwidth as it had with previous administrations, but I see the role of the US delegation, in the way it is currently comprised, not as a showstopper and not as an obstacle but as an impetus to focus on the rulemaking, on the transparency, because it's in the interest of the United States to continue engaging. What is dangerous is, if the United States decides to ratchet down its nationally determined contribution, “NDC,” and that might trigger a whole avalanche of other countries doing the same.

CURWOOD: You suggest that China will take the leadership of this process now. How will that manifest?

IVANOVA: China is likely to take the leadership because we had the Paris Agreement. The Paris agreement could be concluded largely because of the leadership of China and the United States. The two countries decided that it is in our interest to move forward to be champions of this agenda. Now, one of the, those countries has stepped off the stage. It leaves China. China has realized that investing in renewables will forward its economy. It will open new markets. It will make it the leader in the world. We listened to Chinese President Xi just a few days ago, a three hour speech, about China's new role in the world in a new era where China will present new alternatives to countries around the world.

CURWOOD: So, what about finance for island and vulnerable countries to both adapt to what's coming in and help mitigate the continued climate disruption?

IVANOVA: Finance is a very important issue, and it has come up at every single one of those conferences. Countries committed and re-committed to $100 billion dollars a year for developing countries to address climate change. That money has not been forthcoming.

However, what has changed profoundly is the ability of business to contribute and engage in delivering on projects, exactly the kinds of projects that you're mentioning, Steve, that require investment, but these are infrastructure projects. These could be led by businesses.

So, this is one of the issues that will be discussed by governments during the Bonn conference. How do you account for finance? Is it just the finance that you're providing as a public entity, or can you account for the finance that you are mobilizing as a public entity through private sources? Mars, for example is one of the companies that announced $1 billion dollars for climate change, and they're investing it in developing countries.

We unfortunately don't have a way of figuring out what is being invested where by non-public entities and I think that's a challenge. How do we create that accounting system? How do we create, create that knowledge base that we know what the money flows are, where they go, and how they can stimulate and mobilize additional funding? 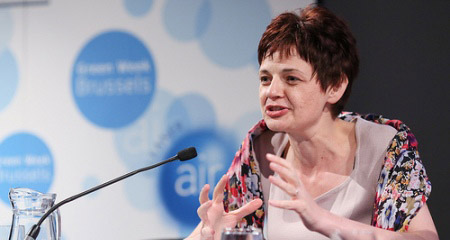 Maria Ivanova is a global governance expert and Professor at the University of Massachusetts, Boston. (Photo: UMass Boston)

IVANOVA: [LAUGHS] No, a billion dollars to ensure the ability to produce more candy bars because, where does chocolate come from? Cocoa. Where is cocoa grown? In developing countries, in West Africa. Who's going to be affected most by climate change? Those countries, and so Mars is putting their money where their mouth is, where the chocolate is.

CURWOOD: Maria Ivanova is a Professor of Global Governance at the University of Massachusetts, Boston. Thanks so much for taking the time.

IVANOVA: Thank you for having me.

More on Fiji’s vision for the Bonn COP23