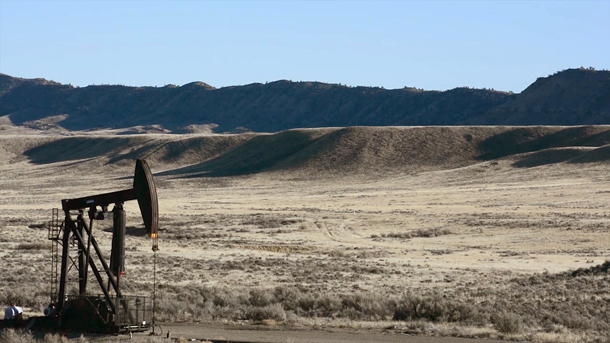 The US Department of the Interior’s new four year strategic plan calls for maximizing fossil fuel extraction from public lands, according to a version leaked to The Nation reporter Adam Federman. Drilling in the Arctic National Wildlife Refuge (ANWR) is part of the plan. That document also has no mention of climate change or climate science. Adam Federman tells host Steve Curwood that the strategic plan is part of the Trump Administration’s larger effort to secure America’s “energy dominance”, and reveals a new agency objective: policing the US-Mexico border.

Donald J. Trump ran on a campaign promise to roll back industry regulations and boost the fortunes of coal and other fossil fuels. And since taking office Mr. Trump has worked to fulfill that promise, with industry-friendly policies front and center at the Environmental Protection Agency and the Department of Interior. A leaked draft of Interior’s four-year Strategic Plan calls for massive fossil fuel extraction from public lands with no mention of climate change impacts.

Here to discuss the plan is Adam Federman, who broke the story in “The Nation.” Adam, welcome back to Living on Earth.

FEDERMAN: It's great to be here. Thanks for having me.

CURWOOD: So, if this new strategic plan by the White House leaves out mention of climate change, what does it focus on in terms of Department of Interior priorities?

FEDERMAN: Well, the heart of the blueprint, the strategic plan for the next five years, is oil and gas drilling, not surprising, and really the speeding up of everything that goes into opening up public lands for development. And it's also important to note that this is happening against the backdrop of an aggressive regulatory rollback. So, on the one hand, you've got the aggressive push to open up both on- and offshore leasing and then the rollback of what many consider to be common sense, even modest, environmental protections.

CURWOOD: Adam, remind us of the kinds of climate related impacts to Department of Interior lands or resources that the Obama administration foresaw. 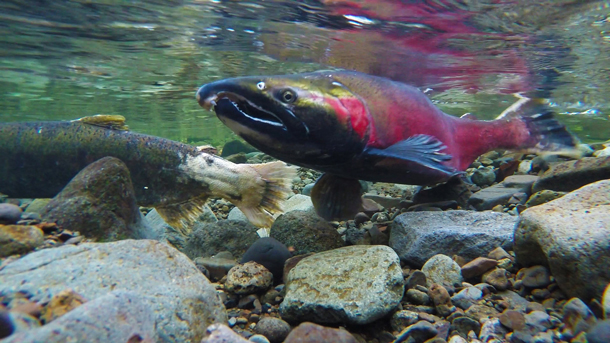 Coho salmon are among the many resources managed by the Department of Interior being affected by climate change. Warmer streams, decreased snowmelt and wildfires threaten aquatic wildlife populations, in addition to dams and mining. (Photo: Bureau of Land Management Oregon and Washington, Flickr CC BY 2.0)

FEDERMAN: Yeah, you know, it's really important to note the fact that both climate change science and dealing with the realities of climate change on the ground now are really front and center for the Department of Interior. The department is made up of 10 agencies, including Fish and Wildlife, Bureau of Land Management, and the US Geological Survey, all of which do extensive climate change research and manage some of the impacts of climate change.

Your listeners may remember a recent story involving one of the top climate scientists at the department, a policy adviser who was reassigned in this big, department wide reshuffling, Joel Clement, and he since has become a whistleblower and has actually resigned because he was moved from his climate science position to an accounting post in the office collecting royalties from the fossil fuel industry. So, he had raised the alarm about the impacts of climate change on native communities in Alaska where coastal erosion and rising sea levels are literally threatening people's livelihoods. So, you know, that's something that the Department of Interior has to confront and the fact that this report omits any reference to climate change indicates that they're planning to, I guess, ignore it.

CURWOOD: Adam, there have been recent reports of other ways the Department of Interior is hushing discussions of climate change. Please outline those for us briefly.

FEDERMAN: Yeah, I think like other federal agencies, the Department of Interior has also engaged in the same kind of scrubbing of its websites of references to climate change. I've spoken with several sources who told me that including climate change in research papers or titles of research papers or even in press releases, it's not a written policy, but it's understood that the language won't be used. So, it's kind of an unspoken policy, but it's one that I think will have far reaching impacts over the course of the next five years. 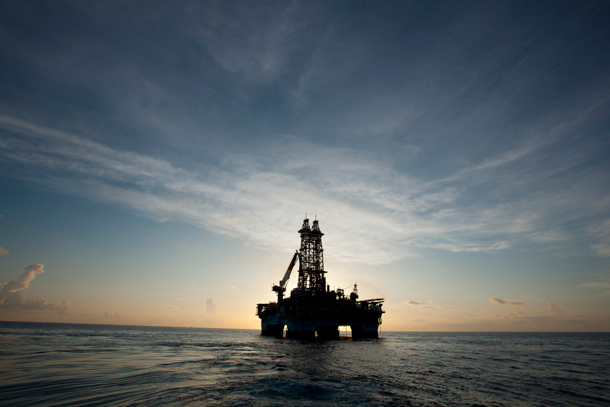 The Department of Interior intends to expedite the permitting process for both on- and offshore leasing, according to the draft 2018-2022 Strategic Plan. (Photo: Robert Seale, Flickr CC BY-NC-ND 2.0)

CURWOOD: Now, to what extent is this focus on energy extraction a departure from what we've seen previously from the Department of Interior when it comes to strategic plans?

FEDERMAN: Yeah, well, there's always a section on utilizing our natural resources, you know, in every strategic plan, this one is no different in that regard, and in fact this is a blueprint that covers everything from outdoor recreation, tribal and insular responsibilities and generating revenue and using public land to produce energy. However, you know, this is in the context of an administration that has pushed for what they're calling energy dominance, and, you know, we're just beginning to see what that really means and what it means is that they are essentially offering up anything and everything onshore and offshore.

We have upcoming lease sales in December in Utah, New Mexico and several other western states in which they are just putting everything on the table. The BLM used to defer a lot of acreage, in fact, when it was in areas that were considered sensitive because of endangered species or critical habitat, and they seem to be not doing that at all anymore, so they're offering, for example, in Nevada something like 400,000 acres, and this is a state where the industry has shown relatively little interest in oil and gas production, so they're throwing everything at the wall, and industry will have its chance to take what it wants.

CURWOOD: So, Adam, if Interior acts on this strategic plan, essentially offering up, you know, every drop of oil, every molecule of gas, every pound of coal for extraction, how interested is the fossil fuel industry in this?

FEDERMAN: Right. Well, you know, early signs are that the oil and gas industry and the coal industry are somewhat reluctant to invest in new projects, given the relatively low price of oil and the very bleak outlook for the future of coal. One of the big moves of the administration and the department was to lift this moratorium on federal coal leasing which they've made great fanfare out of, but what we've seen since then actually is that many companies have actually withdrawn their lease applications for new mines on federal land. And the other thing is that obviously the price of oil is fluid and things could change very quickly. 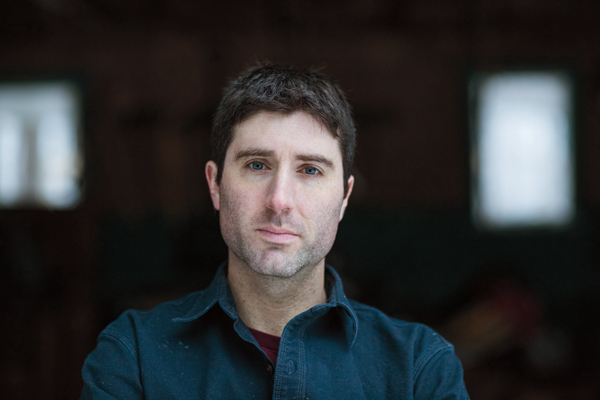 Adam Federman is a reporting fellow with the Investigative Fund of the Nation Institute, covering energy and the environment, and has written for many publications including The Nation, the Guardian, Gastronomica, and Earth Island Journal. (Photo: Adam Federman)

CURWOOD: By the way, what does it do in terms of border protection?

FEDERMAN: That's one of the interesting things about this strategic plan is that it actually includes a new section that was not even mentioned in the previous strategic plan, and it's perhaps worth pointing out that these are produced every three or four years, and there are broad policy guidelines laying out the department's philosophy and sort of where it intends to go. So, one of the six mission areas, as they're called, is Protecting our People on the Border, and it talks about how Department of Interior manages something like 40 percent of the southern border, and, given the Trump administration's emphasis on border security, that Department of Interior itself would be stepping up its partnership with law enforcement agencies and aggressively policing immigration and also drug smuggling.

CURWOOD: Adam Federman is a Reporting Fellow with the Investigative Fund at the Nation Institute. Adam, thanks so much for taking the time with us today.


The Nation: “Exclusive: The Interior Department Scrubs Climate Change From Its Strategic Plan”

Joel Clement’s op-ed in the Washington Post: “I’m a scientist. I’m blowing the whistle on the Trump administration.”