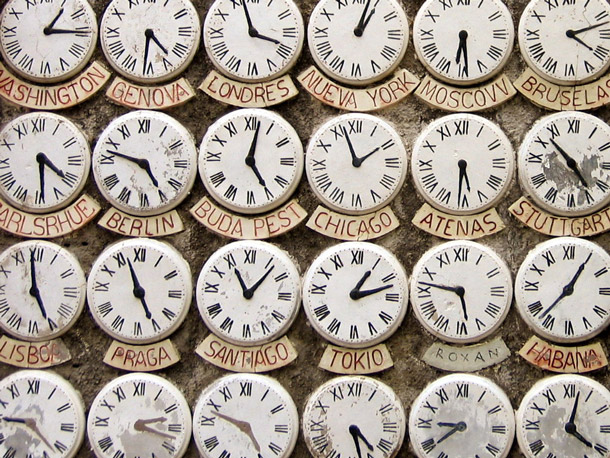 The sun may be setting on a familiar fall tradition in much of Europe and America. The end of Daylight Saving Time sends clocks back an hour, and a Massachusetts legislative commission has found the earlier sunset ushers in more energy use and crime, with an uptick in accidents and illness when clocks “spring forward” in March. The Mass commission recommends effectively sticking with daylight saving year round, if the rest of the region agrees. Commission member Peter Shattuck and host Steve Curwood unpack the surprising benefits of springing forward - and staying there.

CURWOOD: As the days grow shorter in the northern hemisphere, one gets to enjoy an extra hour in bed when Daylight Saving Time comes to an end, and in the US that’s on November 5th. But countries in Asia and Africa don’t change their clocks, and in the US neither do Arizona, Hawaii, Puerto Rico, and parts of Indiana. And recently there has been outright opposition to daylight saving time in California, Florida, Idaho, Michigan, Oregon, Texas. Well, you get the idea. In Massachusetts, a special State Senate commission just voted effectively to stick with daylight saving time year round, but there are still many hurdles before this could become law.

SHATTUCK: Happy to be here.

SHATTUCK: Well, Daylight Savings Time, surprisingly, in addition to stealing an hour of daylight from us during winter months, drives up energy prices and greenhouse gas emissions, worsens our public health, actually increases crime, and then my own personal challenge of having two small children who, instead of waking up at 5:30 in the morning will soon be waking up at 4:30 in the morning when we set the clocks back.

The sun sets on a winter afternoon in Boston. After Daylight Savings Time ends this month, the city will see darkness encroach well before 5 pm. (Photo: Jeff Turner, Flickr CC BY 2.0)

CURWOOD: So, how would extending evening daylight by being on Atlantic Standard Time in the eastern most part of the US in Massachusetts, how would that help save on energy consumption?

SHATTUCK: Well, a lot of it just comes down to when we turn the lights on. So, when we set the clocks back, we gain that hour of daylight in the morning, but we lose it in the afternoon. So, when people are coming home from work or at work or turning their lights on earlier, that creates strain on the grid. What we find is that by setting the clocks back there's a greater increase, about a three percent increase, in electricity consumption during those four months when we're not on Daylight Savings Time compared to a one percent increase in the morning. So, on balance if we didn't set the clocks back for our full Daylight Savings Time, we reduce our evening energy consumption by about two percent, and we are growing significantly reliant on natural gas. When people come home and turn on their lights or bump the heat up a little bit, it means that some of those gas power plants can't get the fuel that they need, so we have to turn on older dirtier units or just keep them around only for those few hours of the year and prices go up. 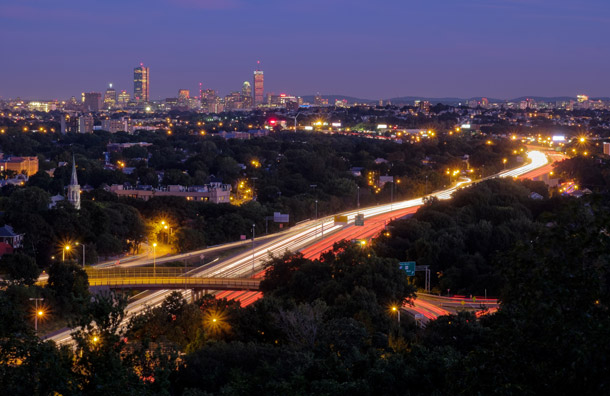 Boston's busy I-93 highway sees heavy traffic in the hours just after dark. A new report by the Massachusetts Time Zone Commission has demonstrated that car accidents increase in probability after the sun goes down. (Photo: Robbie Shade, CC BY 2.0)

CURWOOD: So, your report that you did on this Daylight Saving Time commission also covers the public health benefits. What are those benefits?

SHATTUCK: It's a little surprising the range of impacts. A lot of it makes intuitive sense, but particularly in the spring when we shift the clocks back forward and people drive or go to work drowsy there are more accidents – car accidents, workplace accidents - and also then there's the more, you know, straightforward, if we have more daylight in the afternoon hours during the winter, people tend to be more active.

CURWOOD: So, critics of ending Daylight Saving in these Eastern states argue that another time zone being added to the US would just complicate communications and and hurt the region economically.

SHATTUCK: I think it is important consideration, and that's one of the reasons that the commission is moving towards recommendations that suggest regional coordinated action. You know, we don't want one state doing this alone. That said, we manage all sorts of different time zones and other considerations in our daily lives already. So, we still do business with California or Europe and we're only talking about one hour time difference. So, yes, we want as many states to come along with us as possible but it shouldn't be an obstacle to continuing to have the discussion.

SHATTUCK: Four of the five other New England states are actually considering making the move. A lot of them are looking to Massachusetts as the biggest state in New England and a historical leader on a number of issues and saying basically, “If Massachusetts does it, we'll go along.” 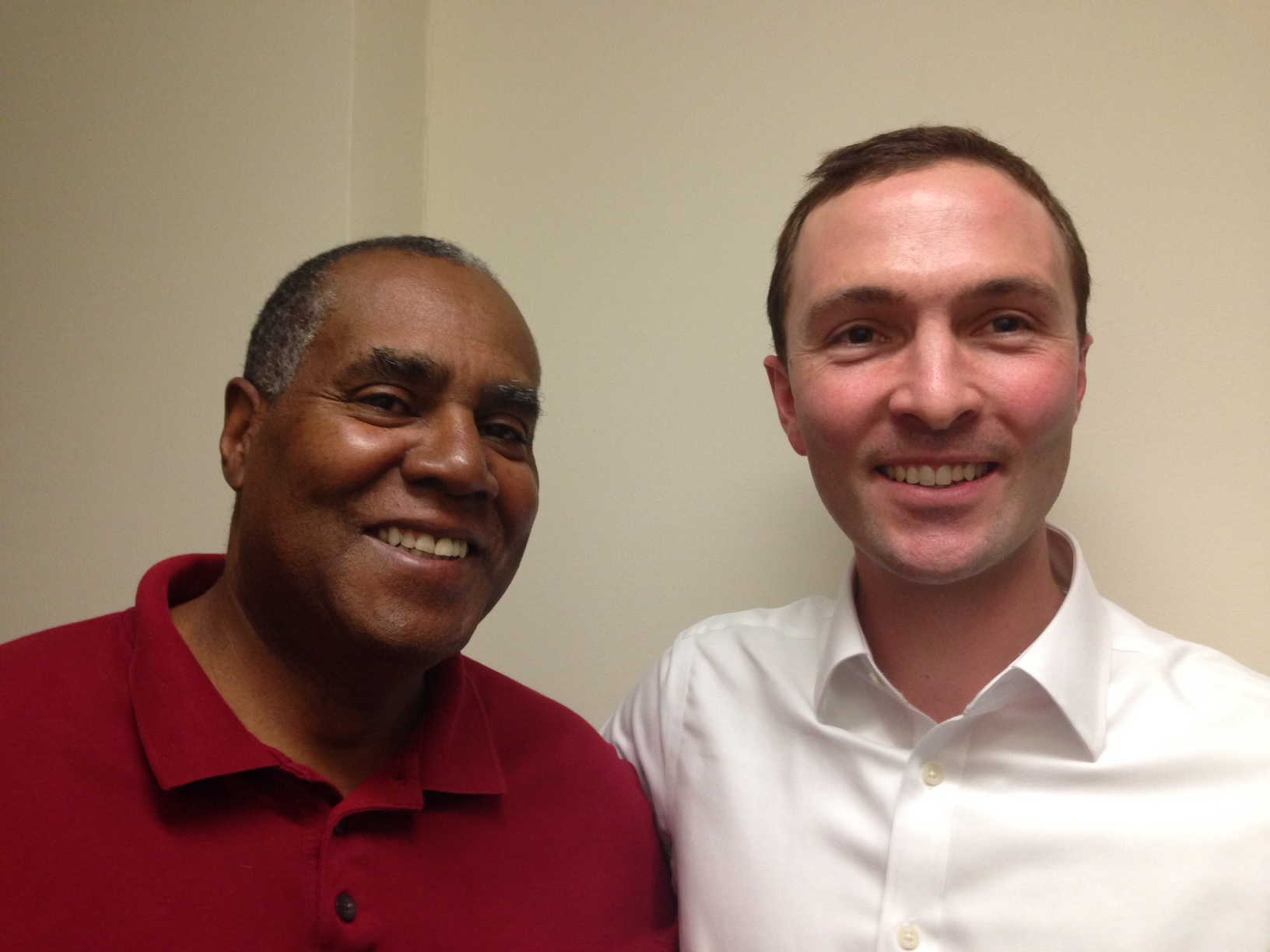 Peter Shattuck posing with Steve Curwood in 2014. Shattuck develops micro-grids for the company Anbaric and served on the Massachusetts Time Zone Commission in his previous role, as director of the environmental organization, Acadia Center. (Photo: Emmett Fitzgerald)

There's then a question of how much farther west do we need to go. There is a lot of interaction with New York, financial hub there. Down to DC would be another place to draw the boundary. I think frankly this is a conversation that's going to take a while to bear fruit, so I think a threshold would be all of New England states, and then we see who's going to come with us.

CURWOOD: Peter Shattuck develops clean energy micro-grids and served on the Massachusetts Senate Time Zone Commission. Thanks so much for taking the time today Peter.

SHATTUCK: Thank you for having me.

Boston Globe: Op-ed by Tom Emswiler, “Why Massachusetts should defect from its time zone”