Much of New York City is only a few feet above sea level, making it vulnerable to flooding like the surge from 2012’s Superstorm Sandy. (Photo: Ilana, Flickr CC BY-ND 2.0)

Melting ice around the globe is fueling rising oceans and coastal flooding with differing impacts . One new study suggests that Antarctic ice melt would raise sea levels along the US East coast where the land is also sinking, thereby making catastrophic storm surges and flooding much more common the New York City region. UMass glaciologist Robert DeConto details the study with Living on Earth’s Jaime Kaiser.

CURWOOD: The late Speaker of the US House Tip O’Neill was famous for saying, "All politics is local", and he could have been talking about the weather. As the global climate system is warmed and disrupted, local weather can change in diverse ways. Consider the region around New York City, for example, where Superstorm Sandy thrashed the coast in 2012 with a destructive storm surge. Such a storm would have occurred about once every 500 years back in 1800. But the east coast of the US is sinking, and combined with rising sea levels from melting ice in the Antarctic, the occurrence of catastrophic surges in the New York area is predicted to rise.

UMass glaciologist Robert DeConto is one of the authors of a new study on this, and he spoke with Living on Earth’s Jaime Kaiser.

KAISER: So, Rob DeConto, you're part of a team that produced this new research on the effects of Antarctic ice melt on flood risk in New York City. So, what are the fundamental conclusions that this new study makes about sea level rise, and what it means for New York City?

DECONTO: I think it was a little bit of a surprising result, in that it's expected that as the world continues to warm over the century, that there are storms will become bigger and badder and more intense. The modeling that was done suggests that, indeed, it looks like the stronger storms will get stronger, but what they found also was that the storm tracks where these storms go, end up being a little bit further offshore and away from the coastline. So, those two things sort of balance each other out. So, there wasn't a really big increased impact on New York from the tropical cyclones themselves. But then when we consider those tropical cyclones in the future on top of the fact that the oceans are going to be rising - So the background sea levels are going to be going up - then we found that there is a really big impact on New York. 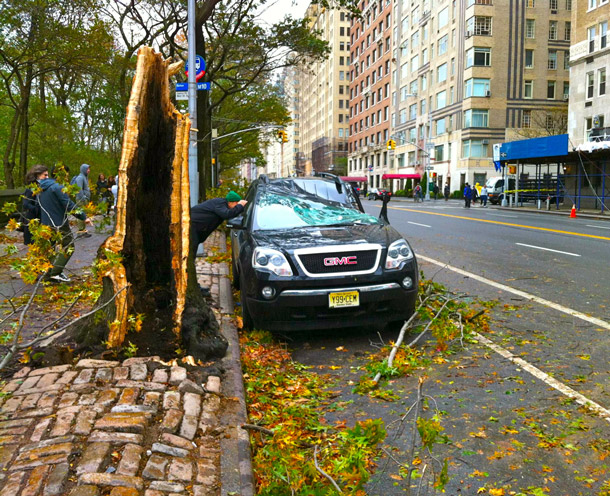 Some impacts of Hurricane Sandy on the West Side of Manhattan in 2012. (Photo: Sarah Ackerman, Flickr CC BY 2.0)

KAISER: So, talk a little bit more about why these background sea levels are going to go up in the future.

DECONTO: Well, I think the really big question is what the big ice sheets that sit on Greenland in Antarctica might do in the future. There is a lot of ice locked up in those ice sheets, enough to raise sea level by, you know, on the order of 65 meters or so. Really, in terms of the long term future, the big questions are what those really big ice sheets are going to do because that's when the biggest potential for sea level rise is.

KAISER: You did a whole other study about Antarctic melt that came out last year, and a lot of that data was then applied to this study. Is that correct?

DECONTO: It is. So, the Antarctic ice sheet has almost 10 times more ice locked up in it than Greenland, and our study last year suggested that Antarctica might be more vulnerable to warming in the future than we used to think. And so, in this New York study, they looked at older estimates, and then they took those estimates and they added the contributions to sea level rise from Antarctica that we published last year, and that drove the impacts on New York upwards.

KAISER: How much storm surge would we be looking at?

DECONTO: They're looking at a fixed storm surge height of two and a quarter meters. So, what's that? That's about a little more than six feet, and they look at how that might evolve in terms of how often that might happen. And what they found was that at the beginning of the last century that it's about one in every 500 years, and then that same sort of level storm surge starts to happen about every 25 years today, and then as you go out into the future, by the time you get to the middle of this century, what used to be a once in every 500 year event 100 years ago, that's a 25 year event today becomes a once in every five year event. By the time you get to about the year 2100, it's almost always at that sea level. So, what is today a big storm surge event like a Hurricane Sandy, just the background sea level is that high in the year 2100 in these more extreme estimates. That doesn't mean that, to say that that's what's really going to happen, but at the more extreme end there's some pretty serious implications.

KAISER: Now, this study focuses on New York, but how can the projections made in this study be applied to predictions for other cities?

DECONTO: You know, they found this really interesting result, where even though the intensity of future storms that could drive storm surge increases, there's a shift in the storm track that compensates for that. That's pretty good news for New York, but that could be bad news for someplace else, maybe further up the coast, Boston, for example or Halifax, Nova Scotia. 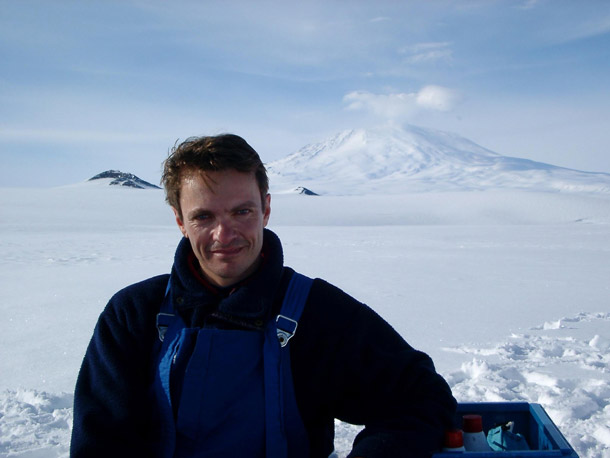 Robert DeConto is a Glaciologist at the University of Massachusetts, Amherst. (Photo: courtesy of Robert DeConto)

KAISER: So, as a glaciologist, how worried are you about this?

DECONTO: You know, I'm more optimistic, I think, than you might think based on you know the sorts of numbers that are coming out of our model, and again that's because we're still finding that in these more aggressive mitigation scenarios, where we really get our global act together and make a concerted effort to reduce emissions, we're finding a much reduced risk of these sorts of really extreme sea levels. Really, at the end of the day the biggest uncertainty is actually not with the models or the understanding of the physics of the system, but it's what we're going to do in terms of society and our future greenhouse gas emissions. So, at the end of the day I'm optimistic.

CURWOOD: Rob DeConto is a Glaciologist at the University of Massachusetts at Amherst. He spoke with Living on Earth’s Jaime Kaiser.