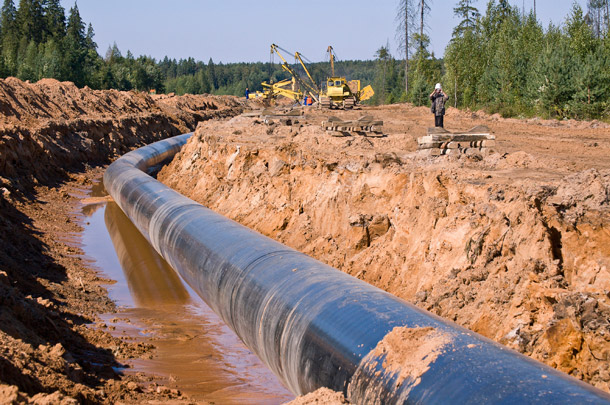 The proposed pipeline would primarily run from Prudhoe Bay to the town of Nikiski, Alaska, much of it underground, in contrast to the existing oil pipeline. (Photo: NPCA Online, Flickr CC BY 2.0)

In a move promoted by President Donald Trump and Chinese President Xi Jinping, Alaska has signed an agreement with China to build an 800-mile natural gas pipeline, but economic hurdles cloud its construction. Alaska Dispatch Reporter Alex Demarban tells Host Steve Curwood what the $43 billion project could mean for Alaska.

Alaska has the largest oil field in North America, with an 800-mile long pipeline to bring all that crude from the far North Slope to Valdez where tankers load up. And ever since the Trans Alaska Pipeline went into service in 1977, industry has talked about constructing a parallel one to tap the region’s vast reserves of natural gas. Well, President Trump has now added to that talk by promoting a preliminary deal with China during his recent visit with President Xi. Alaska and China would split the $43 billion tab to finance and build the pipeline and terminals, and China would guarantee the purchase of the gas.

Alex Demarban, is an oil and gas reporter for Alaska Dispatch News and joins us now. Welcome to Living on Earth, Alex.

DEMARBAN: Thank you very much, glad to be here.

CURWOOD: So, why is getting liquefied natural gas to Asian market such an attractive option for Alaska? 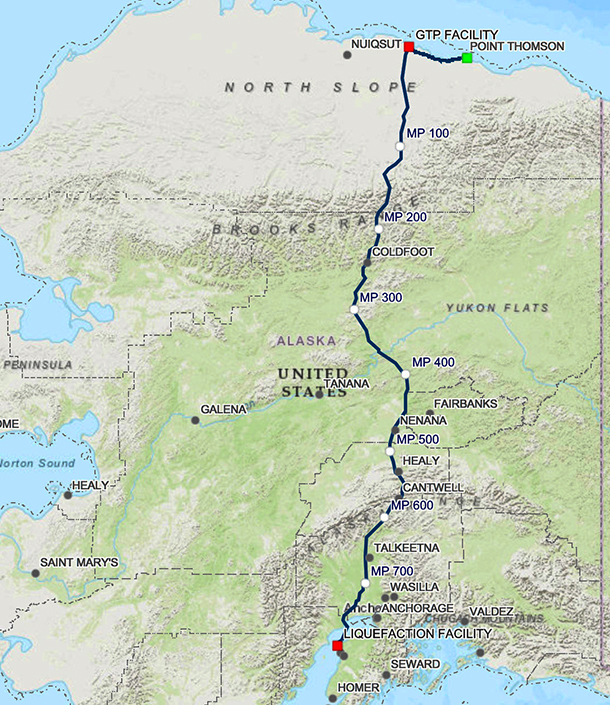 The proposed natural gas pipeline in Alaska would parallel the existing oil pipeline most of the way south, branching to reach a liquefaction facility south of Anchorage. (Photo: Alaska LNG via Alaska Department of Natural Resources map)

DEMARBAN: Well, one of our projects, a gas line in the past that looked at moving gas to the lower 48 [states]...It would just be gas gas, it would not be liquid gas. That changed once we had the shale revolution in the lower 48. There's plenty of gas there now, so then it became a matter of looking at what other markets are out there. So, about six years ago the state began looking at moving gas efficiently to Asia.

CURWOOD: Tell folks where this pipeline would actually be built.

DEMARBAN: So, the pipeline would go from the Prudhoe Bay oil fields where the gas is now, and it would follow the Trans Alaska pipeline for much of its route and connect essentially the Arctic Ocean to our Cook Inlet in southern Alaska. So, it would move the gas 800 miles from northern Alaska to southern Alaska, and there in a little town known as Nikiski, the gas would be turned into a liquid in another costly construction project there and then put onto tankers so it could be shipped overseas.

CURWOOD: So, there's natural gas up on the North Slope there on Prudhoe Bay. What happens to it now? 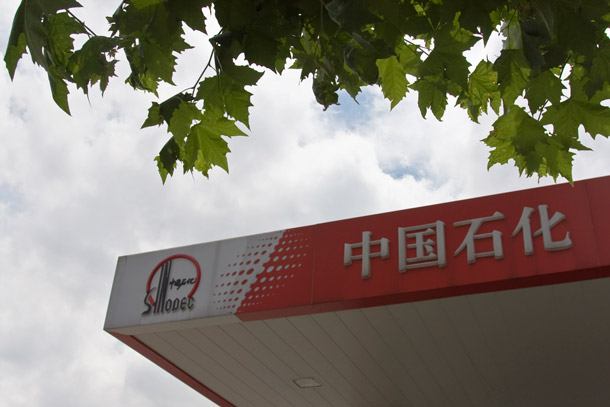 DEMARBAN: The natural gas is being re-injected back into the ground to keep the pressure up in the underground reservoirs, so it's had a very vital existence because it's essentially allowed for much more production of oil on the North Slope. So, the production of oil up there has been far greater than anticipated, and gas is playing a huge role in that.

CURWOOD: What's the state of Alaska's economy like right now, and how could this deal to put in a natural gas pipeline from the North Slope affect the overall economic situation there?

DEMARBAN: Well, we're in a recession. We have the nation's highest unemployment. We've lost a lot of jobs, particularly high paying jobs in the oil fields. So, we are desperate for a project. There's uncertainty about how much this would financially benefit us, but certainly in the hundreds of millions right away if it pans out, as the state says it would, and billions as the debt is paid off 20 years after it begins production. So, we could easily shrink our deficit.

CURWOOD: So, I gather the deal would involve having the state help finance this thing. What are the barriers there?

DEMARBAN: Well, the barriers to the state helping finance this thing is that we don't have a lot of money. We have a very guarded protectionist view of our Alaska Permanent Fund which has about $63 billion dollars and largely seeded with oil revenues that have grown over time. So, a lot of Alaskans would be politically opposed to that being used for this project. So, where does Alaska get the money? We're not quite sure. That's why we need big partners for this project.

CURWOOD: So, I gather that a firm commitment isn't expected from either the state or the Chinese until sometime late next year. What's your opinion about how likely this deal is to actually go through? 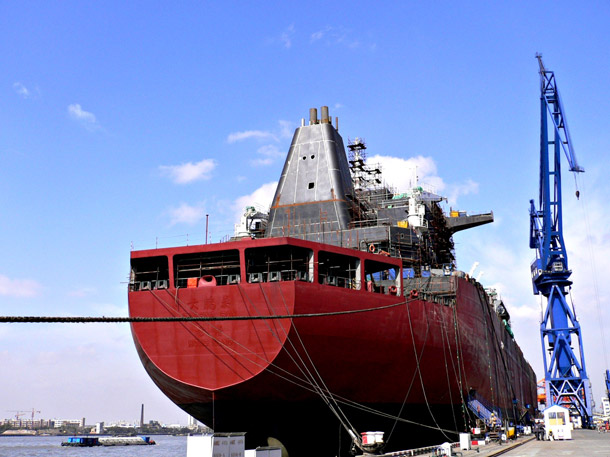 DEMARBAN: I would give it less than 50 percent. Plus on the one hand you have a lot of LNG competitors around the world, lots of energy projects for China to choose from, and significantly we have here in Alaska, at this point, a high cost project with an uncertainty about the price of gas once the project starts moving gas. On the plus side, we are close to China relative to other LNG projects and can really reduce shipping costs. We've got a huge amount of gas that, once someone swallows that pill up front and agrees to invest, this can move gas for decades. But still I would think less than 50 percent, and hopefully I'll be surprised as an Alaskan with family and you know mortgage and all that stuff.

CURWOOD: It seems to me that this was the biggest deal that Trump brought back from his trip to Asia. How much of this was for show, and how much of this is, well, going to go?

DEMARBAN: Certainly there's an incentive for show here with Trump blasting China over the trade deficit and wanting to show that it's being lowered. That was there for a show. Now it's up to the state and China to get past those political considerations and make something go.

CURWOOD: Alex Demarban is a reporter for Alaska Dispatch News. Thanks so much for taking the time with us today.