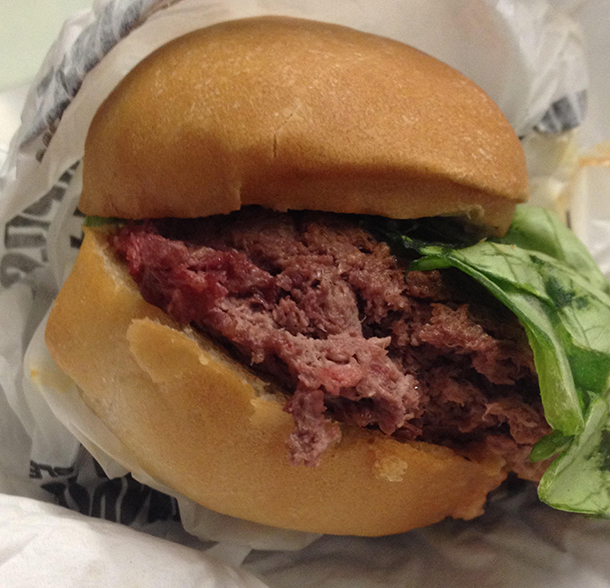 The Impossible burger’s combination of plant proteins lends it an uncanny meat-like texture, as well as flavor. (Photo: Noble Ingram)

The offerings of meat substitutes for vegetarians and vegans have leapt forward in recent years but for most meat-eaters, nothing quite measures up to the real thing. That’s what companies like Impossible Foods are trying to change. Using a complex combination of plant proteins, along with a key genetically-engineered ingredient, the company has a plant-based burger intended to appeal to carnivores. Living on Earth’s Savannah Christiansen and Noble Ingram join a crowd of hungry students in Cambridge, Massachusetts to sample the burger, for a taste test.

The human species evolved as omnivores, gathering leaves, fruits, nuts and berries, and occasionally hunting down creatures for their flesh. And while many vegetarians have lost the taste for meat, whole fast food empires have been built on the flavor appeal of the hamburger. But beef is hard on everything from the arteries to the environment, so now hi-tech food designers have come up with the next generation of cholesterol-free burgers that don’t send cattle to the slaughterhouse.

One of these newish offerings is a plant-based patty being marketed as “the impossible burger”, because thanks to a bit of genetic engineering it so closely mimics ground beef, that it actually “bleeds”, like the real thing. The other day Impossible Foods offered free samples near Harvard Square, and Living on Earth’s Savannah Christiansen and Noble Ingram headed over for a taste test.

INGRAM: So, Savannah and I, we’re standing in this parking lot pretty close to Harvard. It’s raining, and there’s this big crowd of students. Everyone’s waiting outside of this black food truck.

CHRISTIANSEN: Yeah, and every once in a while this tray full of small burgers comes out of the truck.

INGRAM: You know, those burgers are actually Impossible Burgers. They look, they smell like meat, but they’re entirely plant-based. And from the looks of it, they’re drawing a pretty big crowd. 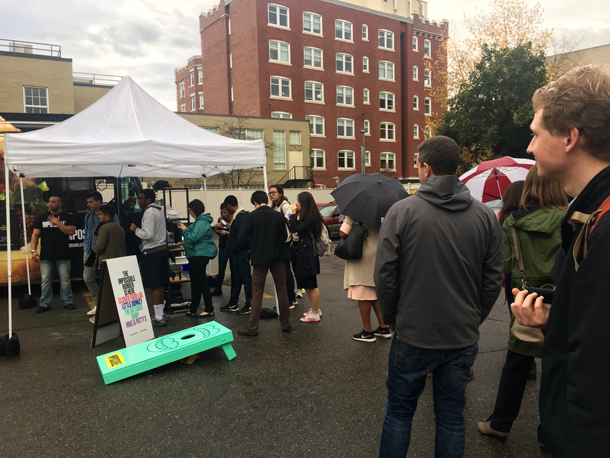 Despite the rain, a crowd gathers in Cambridge for a chance to try the Impossible Burger. (Photo: Savannah Christiansen)

CHRISTIANSEN: Granted, it is free food, and they are students. But I do have to say, I’m a little apprehensive about trying this burger. I mean, I haven’t eaten red meat in about eight years or so, and the idea of my veggie burger bleeding while I’m eating it just sounds really unappealing.

INGRAM: [LAUGHS] You know, I also gave up eating meat, a little more recently. But I have to say, I’m pretty excited about this.

CHRISTIANSEN: All right, so Noble has just received his Impossible Burger.

INGRAM: I mean look at that, it's brown! It’s sort of sizzly on the bottom. It's good. I mean it's sort of heavy like meat. Dense, chewy, kind of oily.

CHRISTIANSEN: It smells like barbeque, I would say. It smells good. I’m not going to lie. Ok here we go. Wow, yeah, tastes like how I remember meat tasting. I don’t know that I would guess that it’s plant. But I’m going to let you eat the rest of this [LAUGHS].

CHRISTIANSEN: So, every time this tray comes out, hungry students reach out to grab them and the tray empties in no time at all.

MONCADA: I’m actually a pretty big meat eater. I tried to be pescatarian for a while, and that didn’t really work because I missed the flavor of meat.

LEE: I’m a hardcore meat eater, but I would be open to not doing so if the taste was similar.

KUPFERMAN: I’m sort of in the process of becoming vegetarian so this is very exciting. 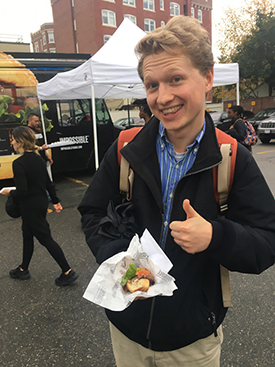 Producer Noble Ingram tries the Impossible Burger. Only recently off of red meat, he was eager to taste an alternative. (Photo: Savannah Christiansen)

INGRAM: And you know, asking around, people’s reasons for showing up are really striking. It can be anything from the political to the personal.

LEE: I know farming meat causes a lot of methane emissions. It’s really, from what I hear, terrible for the environment so I’d definitely be willing to switch over to plant-based meat.

MOBASHIR: I’m Muslim and so I have to try to eat halal. But I break every once in a while, so if I have another alternative, why not?

BRANDE: For me, I have a lot of friends who are vegetarian or vegan, and sometimes it’s hard to go out to eat or cook at home. So, it would be cool if there was something that was like a bridge between that.

CHRISTIANSEN: And you know many of the people, that I talked to say that they have environmental reasons for trying this burger, and that makes sense. The company says their goal is to reduce the carbon cost of producing meat. According to their website, they say their burger uses only a twentieth of the land, a quarter of the water, and produces just an eight of the greenhouses gases that a normal beef patty would.

INGRAM: And on top of that, people think these burgers taste good too.

KUPFERMAN: It sort of tastes like a cross between real red meat and seitan. It’s definitely more, like, meaty than seitan. It has more of that flavor. But I kind of like it better than red meat.

HENSON: So, I’m from Tucson so we eat a lot of Mexican foot, and there’s a similar spice taste to the sort of Sonoran-inspired meats that we make. 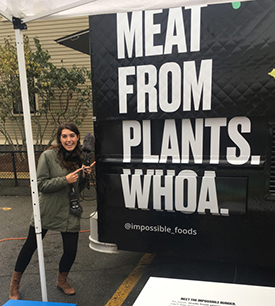 Producer Savannah Christiansen poses next to the Impossible Foods truck. As a long-time vegetarian, she appreciated the burger’s appeal, but wasn’t keen on taking a second bite. (Photo: Noble Ingram)

CHRISTIANSEN: So, I was reading that to make a veggie burger taste beefy and appear to bleed, the company extracts a protein called heme, which is found in blood, but also in plants. And in this case, they get the heme from soy and use genetic engineering to insert it into yeast and then cultivate it in these massive tanks. So that makes the burger genetically modified.

INGRAM: You know, sounds like this burger’s got a complicated genetic background. And that’s an important question to ask for anyone concerned about biological tampering with their food.

MONCADA: I'm a biology person and I feel like there is a lot of mislabeling of GMOs, and that is a personal pet peeve of mine. So, I’m less concerned about that, and more concerned about just the quality of the ingredients in general, regardless of it they are genetically modified or not.

CHRISTIANSEN: Well, personally I don’t know if I would eat it again, but it does seem to be pretty popular.

INGRAM: Yeah, I didn’t think it was quite beef-like but I would definitely have it again.

CHRISTIANSEN: Yeah, well you can get it in some restaurants already, for about the same price as a regular burger.

INGRAM: And I hear this is part of the New England roll out tour. They’re trying to figure out if there’s demand out here.

CHRISTIANSEN: Well, based on what we saw today, I think there could be.