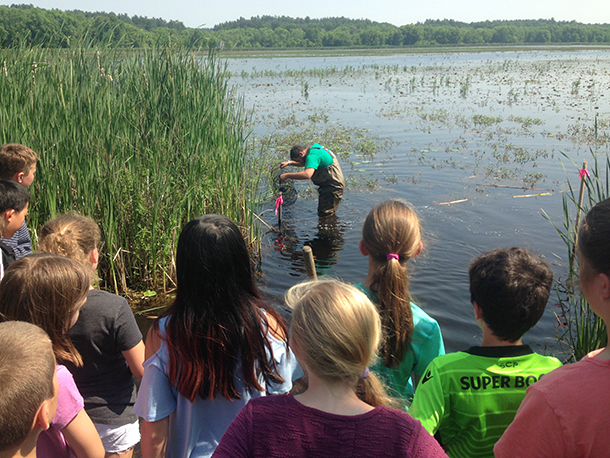 After raising Blanding’s turtle hatchlings all year, it’s time for a class of fifth-graders to send their charges back to the wild to make it on their own. Their care has given these threatened Blanding’s turtles a head start in life, and Living on Earth’s Don Lyman follows the children and the hatchlings to the Great Meadows National Wildlife Refuge in Concord, MA.

CURWOOD: It’s a special edition of Living on Earth, all about turtles. I’m Steve Curwood. We’ve followed the progress of some threatened Blanding’s turtles from the time the eggs were laid near Great Meadows in Concord Massachusetts, through their hatching, and their stay in a school classroom. There, the kids named them Tsunami and Squirtle, fed them, cared for them and learned all about them, until it was time to return the turtles to their wild home. So on a bright June morning, Living on Earth’s Don Lyman headed back to Concord.

[SCHOOL BUS BRAKING]
DENARO: Hi, how are you? Nice to see you again.
[CLASS CHATTERING OUTSIDE AMBI]

LYMAN: We meet up with the Carlisle School fifth graders at Great Meadows National Wildlife Refuge in Concord, Massachusetts, where Bryan Windmiller, the Executive Director of Grassroots Wildlife Conservation, is back in his waders, with an assistant.

WINDMILLER: So, I’ve met you guys – I’m Bryan Windmiller, this is Benji Miranda, who works with me. We’ve got a beautiful morning to go out and check out the habitat where your turtles are going to be living.

LYMAN: The class starts down the tree-lined path that leads to the ponds at Great Meadows. It’s a pleasant spot; beyond the trees, cattails wave in a light breeze over the deep-blue ponds. Butterflies and red-winged blackbirds flit through the air, and occasionally you might see a Great Blue Heron take to the sky. Yet while it looks natural – it’s very much not.

WINDMILLER: All around here – we have a real mix of plants and animals that are both from here – that started out here so they’re native – and there are also lots of species that got here only recently, because people – whether on purpose or not – have brought them. These beautiful smelling roses – I’m getting all the perfume from these guys – this is an Asian rose, it’s called multiflora rose. So it’s only here because people brought it here. They thought it looked good, the blossoms smell really good – and now it’s all over the place. 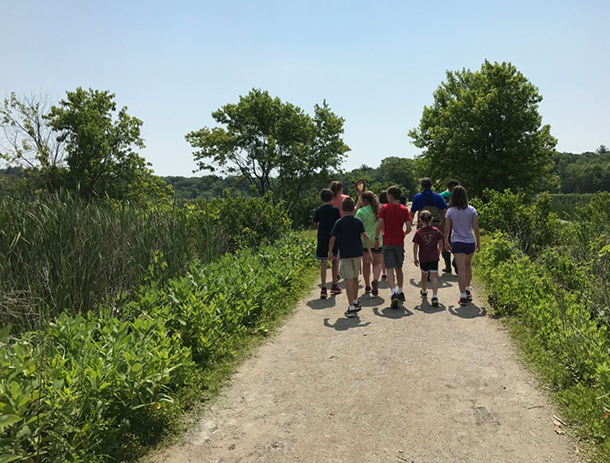 Students walk along the path dividing the man-made ponds at Great Meadows National Wildlife Refuge before releasing their turtles into the ponds. (Photo: Jenni Doering)

LYMAN: Invasive species like purple loosestrife, Asian water chestnut, American lotus, and European carp have affected the makeup of flora and fauna here. And even the ponds themselves are not natural.

WINDMILLER: This whole place – as we walk along, you’ll see there are 2 big ponds that extend on either side. And this place is called Great Meadows, right? It’s not called Great Ponds. 80 years ago these were kind of scrubby meadows where people earlier in history from Concord used to graze their cows.

LYMAN: Then a man named Samuel Hoar, who owned 250 acres of land known as “Great Meadows”, decided to build low earthen dams, or dikes, to hold water within the meadows -- so that he could hunt the waterfowl that would be attracted to the ponds. But the change wrought by a private landowner who wanted to hunt ended up having a positive impact for some species.

WINDMILLER: We all know about all different ways in which people can affect the environment in ways that makes it harder for wild animals to live there. But in all kinds of ways, too, people can change the environment to help different kinds of wild animals. Whether it’s on purpose – Samuel wanted there to be more ducks so he could hunt them – but Samuel also made this better Blanding’s turtle habitat.

LYMAN: The turtles were here before the artificial ponds, and their population got a nice boost from the extra habitat. Then, as residential developments went up near Great Meadows in the latter half of the 20th century, and the turtles lost nesting habitat and fell victim to automobile traffic, their numbers dropped again. They’re now a threatened species in Massachusetts, so Grassroots Wildlife Conservation is working to get the adult population back to 200 from the 50 or so Blanding’s Turtles that live at Great Meadows now.

LYMAN: On the straight-as-an-arrow dike that divides the two man-made ponds, the group stops a couple times to check turtle traps Bryan and Benji had set earlier that morning.

MIRANDA: So these big ones are the ones we usually try and find the adult Blanding’s turtles in.

LYMAN: Neither trap has any Blanding’s turtles – but there are several pretty Painted Turtles.

WINDMILLER: Anybody wanna hold this guy? So if you hold this guy, just remember, right? He’s a wild turtle. So – if you put your finger right in front of his face, what might he do?

WINDMILLER: Bite you on the finger. So don’t put any part of your anatomy right in front of his face.

LYMAN: Soon it’s time to head back down the path to the parking lot. There’s a big metal observation tower at one end, where birders and other nature enthusiasts can peer down across the ponds to spot the many wildlife species that call this place home. Bryan gathers the group at its base to record some final data points about Tsunami and Squirtle before they’re released, and to deepen the notches in their shells that will help identify them when they’re recaptured, perhaps years later.

WINDMILLER: All right, what have we got?

WINDMILLER: 74 point zero. Thank you Squirtle. Okay, so, who’s got the data sheet? Awesome. So he’s now, right, 7 times heavier than he was when you got him, and when he hatched he would have probably been even a little less than that. So probably 8 times heavier now. Right? Which is a huge difference. And when they get to be fully adult, right, in their late teens or early twenties, they get to be -- a big Blanding’s turtle around here will be about 1,800 grams. So you guys need to get back; and Tsunami and Squirtle need to get going. So if you want to go up on the tower – and you can array yourselves, some of you on the top, some of you on the stairs.

LYMAN: From the tower they watch as Bryan and Benji wade between cattails, to a nice shallow spot in the ponds.

STUDENTS CHORUS: Nooooo they’re leaving! Guys, the turtles are leaving… They’re going away!... It’s their first time in the water other than their tank. 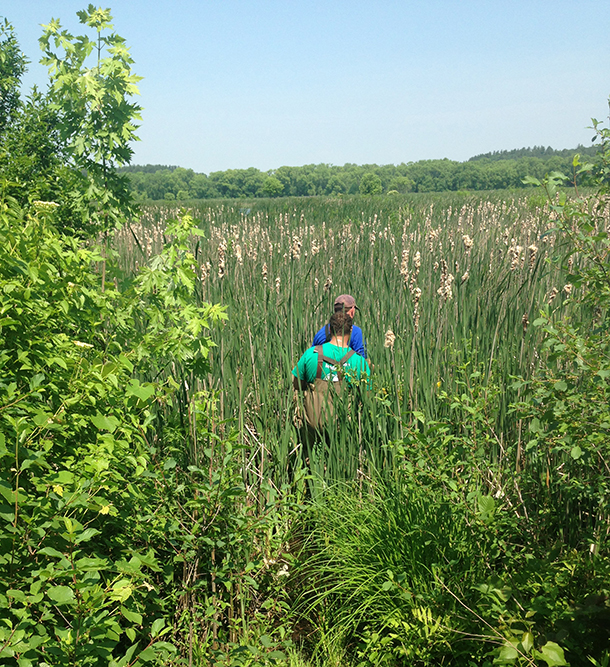 LYMAN: One kid, Owen, isn’t quite sure how to feel about saying goodbye.

OWEN: I liked watching them grow, it just made me happy to see them getting bigger and that they’d be released. I mean I’m happy that they can go but sad we can’t take care of them anymore because they’re so cute. So it’s like melancholy.

LYMAN: What do you wish for the turtles?

OWEN: I want them to get really large and die naturally, not from a predator. Even though that is kind of naturally. But still.

LYMAN: Judging by the high survival rates of turtles that have gone through the headstart program in years past – Owen may very well get his wish.

WINDMILLER: What’s really cool is we just found a turtle who is from 2028, who was released last year; the previous class found him right about here, walking across the path.

LYMAN: And a few days later, as night fell -- exactly a year and one day after number 2028 laid the eggs that would include Tsunami -- Bryan reported that she was just finishing up her nest in someone’s front yard, across the street from where she laid her eggs last year.

The eggs looked normal – there were 8 of them – and since Turtle 2028 had chosen a recently-delivered mulch pile for her nest, Bryan and his team gently moved them to a safer spot in the earth a few feet away. All summer long they’ll incubate in the warmth of the nest. And then, one day in autumn, these young Blanding’s turtles will poke through their shells, crawl up through the earth, and go to school. For Living on Earth, I’m Don Lyman in Concord, Massachusetts.