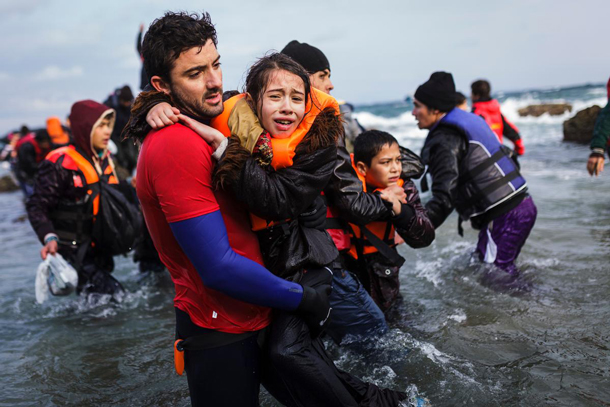 More than a million refugees and migrants are seeking safety in Europe. (Photo: United Nations)

Rising temperatures in agricultural regions in developing countries correspond with an increase in refugee numbers seeking asylum in Europe, according to research published in the journal Science. Columbia University economist Wolfram Schlenker tells host Steve Curwood that if global warming gas emissions continue at the present pace the number of asylum seekers to Europe could increase by nearly 200 percent.

CURWOOD: It’s Living on Earth, I’m Steve Curwood. Unrest, war and terrorism have helped boost the numbers of desperate people fleeing parts of the Middle East and Africa. And now research shows a warming planet may also be a culprit. A study in the journal Science links higher temperatures in agricultural regions with the flood of people seeking asylum in the EU. What’s more, if current temperature trends continue, the EU can expect an additional 600,000 or more refugees begging to come in each year, nearly twice as many as those who currently seek asylum. Wolfram Schlenker, a co-author of this paper, teaches Economics at Columbia University and he joins me now. Welcome!

SCHLENKER: Thank you for having me.

CURWOOD: So, first of all tell me about your study. What countries did you include in your research, and what exactly were you looking for?

CURWOOD: So, what is your basic finding then?

SCHLENKER: So, the paper is two parts. The first part is just linking for 15 years 2000 to 2014, year-to-year changes in weather. Was it hotter than average or colder than average, and as a result, do asylum implications to the European Union from that country increase or decrease? What we find is this non-linear relationship. Around 20 degrees Celsius, which is 68 degrees Fahrenheit, we see that asylum applications seem to be lowest. And if you're hotter or colder, they tend to increase. So, what this implies is if that you're a country which currently has a temperature that is higher than this optimal 20 degree Celsius level, you would see an increase with warming. If you are in a country that currently has a temperature that is lower than the 20 degrees Celsius optimum you would actually see a decrease from warming. 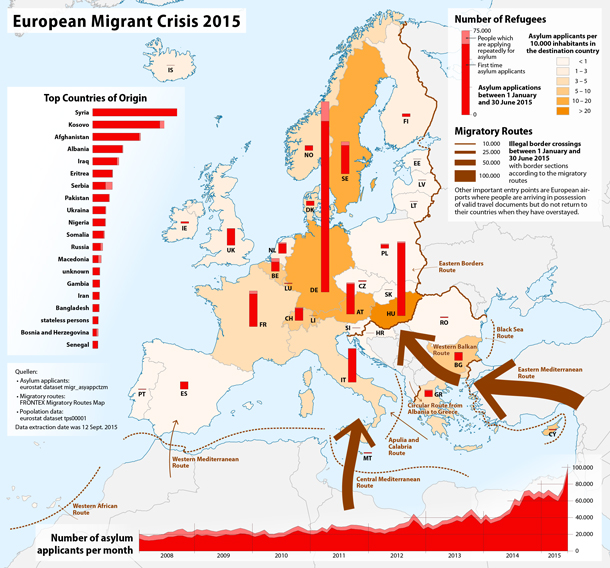 CURWOOD: That's the first part of your paper. What's the second part?

SCHLENKER: The second part of the paper then basically uses this statistical relationship that I'm fairly confident in, and extrapolated out to the end of the century until 2100, and tries to predict what would happen though asylum applications in the future. And there we find that under a business as usual scenario -- continued use of fossil fuels, high population growth -- asylum implications to the EU are predicted to increase by 188 percent, while under a medium scenario you would basically only see a 28 percent increase.

CURWOOD: It's interesting, but people just can't seek asylum because it's getting too warm to farm the way they used to. Refugees have to prove that they're subject to persecution at home ordinarily.

SCHLENKER: It's definitely accurate that people who seek asylum protection need to basically prove that they were persecuted in their home country. Now, there's a lot of literature to basically show that weather shocks lead to conflict, lead to civil unrest. So, we think the likely mechanism behind here is that the weather is bad for agriculture and you don't do as well, you actually see an increase in conflict because it sort of pays more to join a conflict than to farm your farm.

CURWOOD: What's the data that you see about the availability of food and hunger as a result of increased temperatures and declining agricultural productivity?

SCHLENKER: In earlier studies, co-authors of mine and I have shown that especially extreme heat is very detrimental to agricultural output, so this relationship seems to be fairly consistent all over the world and then temperatures go above. There, it's on a daily basis, not on a seasonal average, but on a daily basis about 30 degrees Celsius we see very sharp drops and yields for that at the end of the season.

CURWOOD: Now, when you're doing scientific research there's a big difference that you guys notice between correlation and causation. How confident are you that increased temperatures are actually causing an increase in the number of refugees? 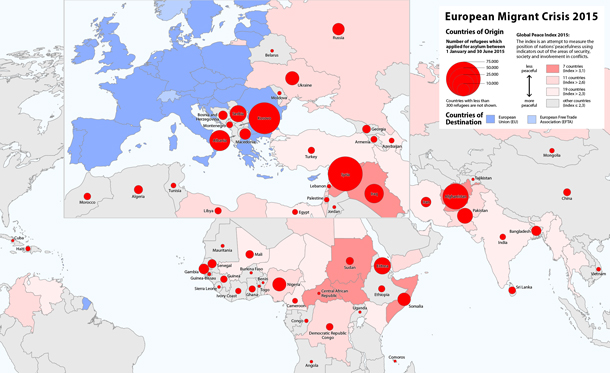 SCHLENKER: I think there are two steps to this answer. So, in the first part of the paper where we look at the relationship between those weather shocks and asylum applications, I'm very confident we uncovered a causal relationship because those weather shocks -- again those deviations, whether you're hotter than normal or colder than normal -- are random and exogenous. So, that's not just a correlation. I'm pretty sure this is a causal relationship. Now, the second step is basically using that observed statistical relationship in fast-forwarding it 80 years into the future, and there we need this big assumption that we hold everything else constant, and you might argue that in 80 years things might change.

Now, it's not clear our priority in which direction things might change. On the one hand, people might adapt, become better at withstanding higher temperatures, therefore, you might expect that in the future you see a less sensitivity to a temperature than you observe now. On the other hand, you might argue that right now we're basically measuring the effect of getting once in a while of bad outcome, like a hot year, that diminishes your agricultural yields or leads to more aggression. While in the future with climate change you would observe those years in a row several times, and you might think that this might lead to further unraveling, that you might be able to basically to stand a shock once if it happens once in a while but couldn't withstand it every single year. So, the estimate actually also be a lower estimate if then in the future this further unraveling that we're not capturing right now.

CURWOOD: Wolfram, how well do you sleep at night knowing this research that you know now?

SCHLENKER: So, I think there is a myriad of impacts of climate change in various countries. I also think, though, I really believe in the human ingenuity. I really believe that humans have ways to combat climate change. And so far, I feel like the best estimate is that it's not that costly, considering to what the potential benefits might be. So, I personally feel that with human action, with human engineering and new developments, we might very well still be feasible in achieving something, but what we need is the political willingness to engage in that.

CURWOOD: Wolfram Schlenker is a professor at Columbia University. Thank you so much for taking the time with us today.

SCHLENKER: Thank you for having me.


The paper in the journal Science: “Asylum applications respond to temperature fluctuations”

Wolfram Schlenker is a professor at Columbia University