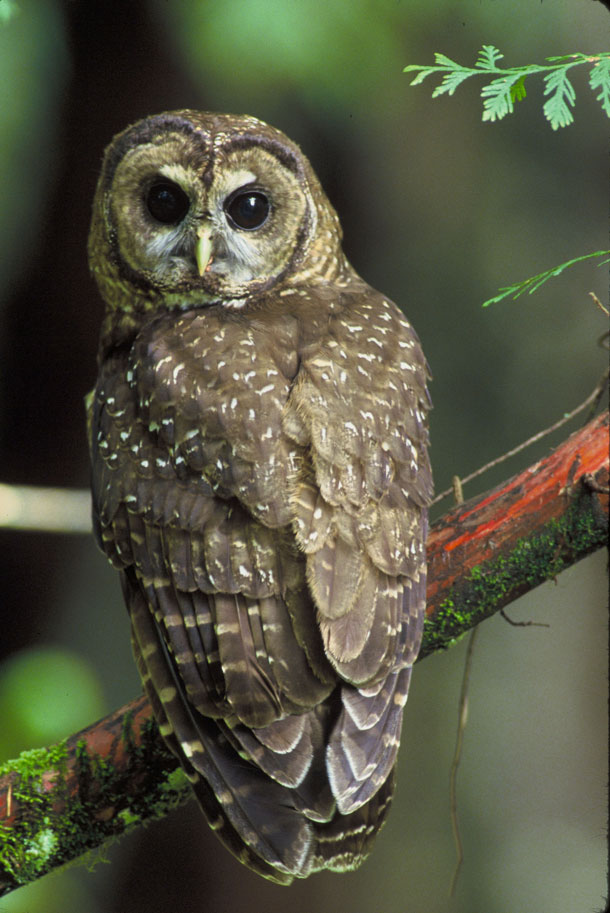 The Northern Spotted Owl, an already threatened species, is facing a growing risk to its health from marijuana farms where the spraying of rodenticides is contaminating the owls’ food. (Photo: US Fish and Wildlife Service, Flickr CC BY 2.0)

In keeping with this week’s theme, Peter Dykstra and host Steve Curwood discuss a new and surprising danger to an already threatened bird: the Northern Spotted Owl. Also subject to new environmental dangers is the Giant Panda, according to recent research. For this week’s history lesson, Peter Dykstra recalls William O. Douglas, the greenest judge to ever sit on the U.S. Supreme Court.

CURWOOD: Let’s take a trip now beyond the headlines with Peter Dykstra. Peter’s an editor with DailyClimate dot org and Environmental Health News, EHN dot org and he’s on the line from Atlanta, Georgia. Hey Peter, what’s up?

DYKSTRA: Hi Steve. Let’s talk about two animals with cute, cuddly reputations in pop culture – owls and pandas – that you probably wouldn’t want to get too close to in real life. And, unlike a TV ad or a Pixar movie, real life isn’t always that adorable.

CURWOOD: You’re telling me there’s not a happy ending?

DYKSTRA: For now, no. But let’s start with the owls. Recent research shows marijuana can be deadly for some spotted owls.

DYKSTRA: In a way, yeah. Even as recreational marijuana use becomes legal in states like California, much marijuana farming remains unregulated and in many ways, an environmental mess. One of those ways is that rats and mice love hanging out at pot farms, so pot farmers often use rodenticides. Spotted owls and barred owls love mice and rats, and recent research shows they’re becoming unintended victims of the pot farmers’ poisons.

CURWOOD: But even without the poisons, the Northern Spotted Owl is still under threat, right?

DYKSTRA: That’s correct Steve, they’re not out of the woods.

CURWOOD: Ooh, well I think we should just fly right past such an awful pun and move on to the pandas. 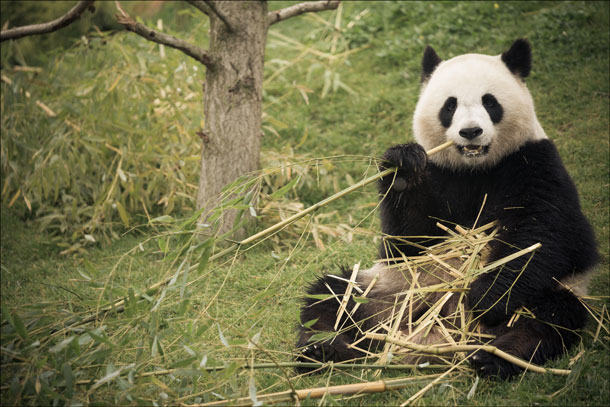 Giant Pandas were recently updated by the IUCN from “endangered” to “threatened,” but they continue to face environmental dangers from damaged habitat and rapid industrialization. (Photo: Adrien Sifre, Flickr CC BY-NC-ND-2.0)

DYKSTRA: Sure, and sorry about the bad pun. In late 2016, the International Union for the Conservation of Nature delivered some good news on Giant Pandas, upgrading them from “endangered” to the slightly less dire “vulnerable.” But new research says not so fast. Not only is dwindling, fragmented habitat still an issue, but China’s rapid industrialization leaves its pandas open to toxic chemicals in the air and in food sources. And this will make the panda’s road to recovery even tougher.

CURWOOD: So pandas are suffering the same kind of pollution problems as many Chinese people, huh? Perhaps polluted pandas will be the same kind of iconic symbol for China that the flaming Cuyahoga River once was for water pollution in this country.

DYKSTRA: Well I guess anything is possible. And for this week’s history lesson, let’s take a look back at an American environmental giant of the 20th Century. William O. Douglas was pretty clearly the only treehugger to sit on the United States Supreme Court. He died 38 years ago this week. While on the bench in 1972, he argued that nature should have the same legal rights as humans. 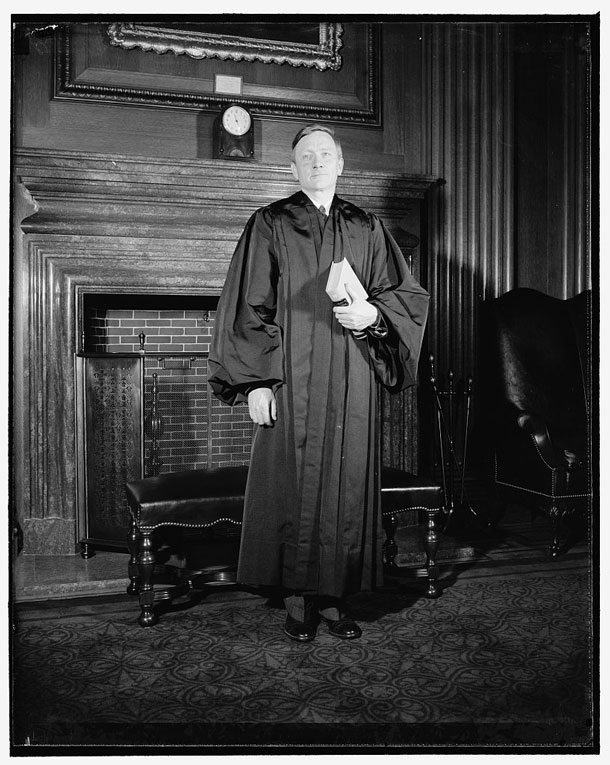 Justice William O. Douglas was arguably the only “tree hugger” ever to sit on the U.S. Supreme Court. (Photo: Harris & Ewing from the United States Library of Congress’s Prints and Photographs Division, public domain)

CURWOOD: Now that’s an idea that’s gaining increasing traction nowadays; but I don’t think it was enshrined into law when Justice Douglas was on the high court.

DYKSTRA: Nope, but get this: also while on the bench in 1967, Justice Douglas led a “protest hike” along one of the prettiest stretches of the Delaware River, on the Jersey side, to oppose the Tocks Island Dam.

CURWOOD: And the marching jurist got the Dam project stopped?

DYKSTRA: Well, the judge’s activism certainly didn’t hurt, but the prospect of the Tocks Island Dam inspired a major citizen’s movement, and today the area is a free-flowing river and part of the Delaware Water Gap National Recreation area.

CURWOOD: Yeah and I understand that nearly four million visitors go there every year since it’s less than two hours from New York City.

Peter Dykstra is an editor with Environmental Health News, that’s ehn.org and dailyclimate.org. Thanks Peter, we’ll talk to you again real soon

DYKSTRA: Ok Steve, thanks a lot. Talk to you soon.

CURWOOD: And there’s more on these stories on our website: loe.org.