Pulling the Plug on Mega-Dams 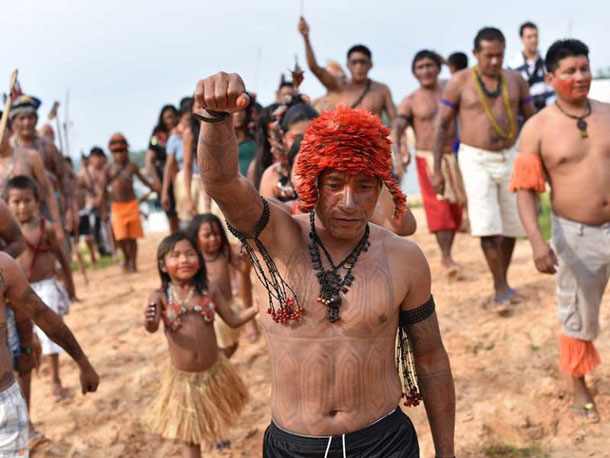 Big dams have been big business in Brazil for the last decade or so but in the wake of scandals and protests the Brazilian government recently called a halt plans for more mega dam construction. Mongabay reporter Sue Branford tells host Steve Curwood that the news is welcomed by both environmentalists and indigenous peoples.

CURWOOD: Massive dams require plenty of concrete, but there are now plenty of political and ecological cracks in plans to build new giant hydropower dams in Brazil. Scandal and protests have prompted the Brazilian government to call a halt to more mega dam construction in the Amazon. For an update, we’re joined by Sue Branford, a Brazil reporter for the environmental news agency, Mongabay. Welcome to Living on Earth!

CURWOOD: So, talk to me about the history, the recent history, of building mega-dams in Brazil.

BRANFORD: Oh for about the last 20 years, I suppose, they've had really grandiose plans for over 80 big dams in the Amazon basin, and some of them have gone ahead. But as they've gone ahead with them, they have actually found they've got problems with them, and I think some of the problems come back to the fact that they were being funded by the state, by the government, so successive governments took electoral funding from the construction company and then had to find a big project that it could set up so that it could pay the construction companies back, and it got worse over the years. I mean, I about two or three years ago, I was involved in a research project on Belo Monte which is of the largest dam in the Amazon, it's the third largest in the world, and I was interviewing people, engineers and environmentalists, energy experts and I couldn't actually find anybody who thought it was a good project, and in the end I rather concluded that the only reason it was going ahead was because the Workers' Party then which was then in power, needed a big project in the Amazon so it could pay back the construction companies, and that really isn't a very good basis on which to be developing energy in the Amazon. 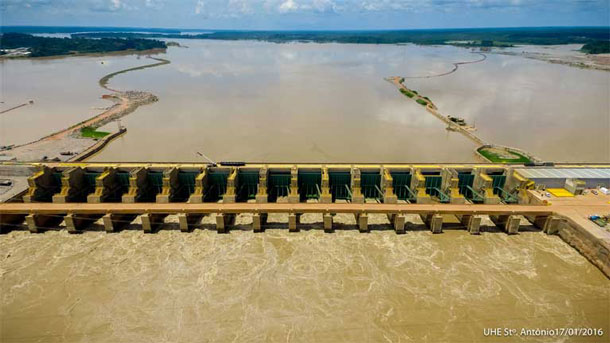 The Santo Antônio dam on the Madeira River, Brazil, part of the Madeira Hydroelectric Complex. An era of mega-dam construction in the Amazon basin that damaged freshwater and forest ecosystems may be coming to an end. (Photo: the Brazil’s Growth Acceleration Program [Programa de Aceleração do Crescimento])

CURWOOD: So, what are some of the problems that these dams have caused from your perspective?

BRANFORD: Well, there's all kinds of problems. I mean, one is that these big dams really do upset the rivers. The river is really central to the survival of the forests. You need what they call a pulse, you need the river water to to rise during the rainy season and then fall during the dry season and sometimes the difference in river level is something like nine meters. And it's lovely in the rainy season, you can go out in a little canoe and go into the canopy of the of the forest. And you can see the fruits and the seeds of the trees dropping into the water. And then when the water goes down this – these seeds and fruit are food for the fish. And if you put dams on the river, you break this up. The river no longer has this pulse, no longer goes up and goes down. So, you are disturbing the whole rhythm of the forest.

CURWOOD: So, let's talk about the indigenous folks who are very opposed to this. I mean, there are many different indigenous groups, but talk to me about a typical protest, a typical opposition to the dams.

BRANFORD: Well, the one I know best is the Munduruku Indians who live on the Tapajós River. There's about 12,000 of them, and they've had a big dam, the Teles Pires dam constructed right near their village. In fact, when they built this dam, they destroyed one of the most sacred sites of the Munduruku. This sacred site is where the people go when they die, that's where their spirits go when they die. And now, they said, we will be killed in two ways. Our lives are being destroyed now by all the impacts of the dam and our future after we die is being destroyed. So, it's a horrific impact. So, when you can see this kind of impact, they are absolutely determined, they're going to stop, put an end to these big dams, and their opposition has been very important. 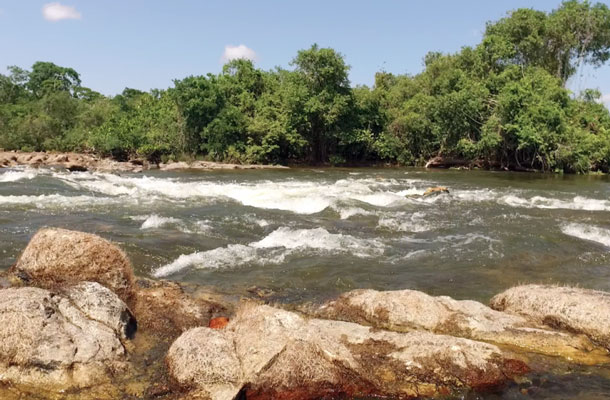 The Tele Pires River stretches 1,370 kilometers (850 miles). Four recently completed dams on that river have done major environmental harm and were met with numerous significant indigenous protests. This week’s announcement by the Brazilian government may save other Amazon Basin rivers from a similar fate. (Photo: Thais Borges)

CURWOOD: So, there were promises about the amount of energy that these dams would produce. To what extent that they meet those promises?

BRANFORD: They haven't met these promises. I mean, I think the worst one is Belo Monte, which is the biggest one. Rainfall has been very unreliable. The Amazon is starting to have quite a lot of droughts, and unless the reservoirs fill up sufficiently, they're not going to generate the energy that was promised. So, they haven't. I mean it's early days for Belo Monte, it's only been operating for a couple of years, but so far the indications are that it certainly won't reduce the amount of energy that was promised.

CURWOOD: So, yes, these were hydroelectric dams that were going to provide electricity to remote areas. How successful were they with the dams that were built?

BRANFORD: Well, this was what we were told by the government, that these dams would provide energy for local people. But in fact, in the majority of cases they didn't. These projects were really geared to big mining projects. Things like bauxite. If you're going to process bauxite into aluminum, you need a lot of energy. This is what they were really about, but for local people, I mean, the number of times I've travelled near a dam, a big dam in the Amazon, and the local people have power shortages, have all kinds of problems with energy because they're just not getting the energy from the big dams.

CURWOOD: Well, so now it seems that the government is going to take at least a break from the dam building business. What exactly happened?

BRANFORD: Well, the government didn't ... the minister didn't actually come out with a very clear announcement that there are going to be no more mega-dams, but some very important leading officials, including a man called Paolo Pedrosa, who the executive secretary of the Ministry of Mines and Energy, really the power behind the throne, he said he thought the period of mega-dams had come to an end. And I think it was basically the realization that they just don't have the money now. I don't think it was so much environmental awareness, it was just that now Brazil has got a right-wing government, a government which is cutting back drastically on the money that goes to state companies, and also if they did push ahead, they were going to get more opposition than ever before that made them think hmm, maybe this isn't the right way forward. And then, of course, solar energy is getting much cheaper. Wind energy is getting much cheaper. It doesn't really make sense for Brazil to invest billions of dollars in these very big projects. 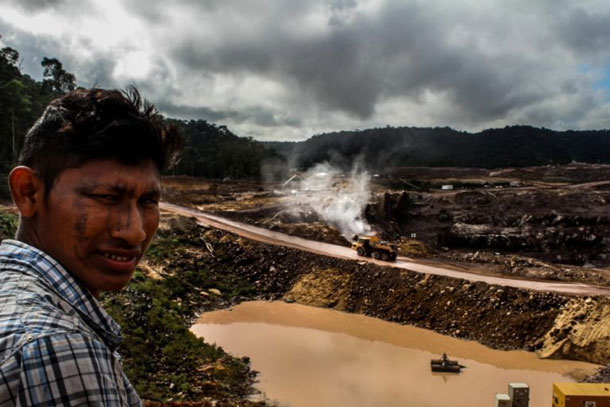 An indigenous leader in April 2015 at the São Manoel dam construction site on the Teles Pires River in the Tapajós basin. (Photo: Midia Ninja, courtesy of International Rivers)

CURWOOD: So, if the lack of money is really behind this pause in dam building. I gather there's no guarantee that they won't build these dams, what about folks with deep pockets who might build them? One has to think of the Chinese, for example.

BRANFORD: I mean that is a possibility. I mean, the Chinese are moving into the Amazon in a big way. What they are fundamentally concerned about is getting Brazil’s soy to get it transported up North so it can go to Asia through the Amazon River. They've helped with the paving of roads. They may be helping with the construction of a big railroad. There is talk of them setting up an industrial waterway which would be pretty catastrophic for the forests, which would mean just that you’d dredge the river and you dynamite the rapids, and then you'd have big barges taking the soy out. But I think there's also a growing awareness among a lot of people that it really does not make much sense to go on cutting down all this forest to create these big infrastructure projects. People know that this will liberate more carbon dioxide into the atmosphere. It will mean that these trees aren't absorbing Carbon Dioxide. It's just making the whole crisis worse. So, I think there is a growing awareness that we do need to stop cutting down the forests, but whether this growing awareness will gain momentum and be sufficient to actually stop that ever deforestation of the Amazon, nobody knows.

CURWOOD: Sue Branford is a Brazil reporter for the environmental news agency MongaBay. Thanks, Sue, so much for taking the time with us today.