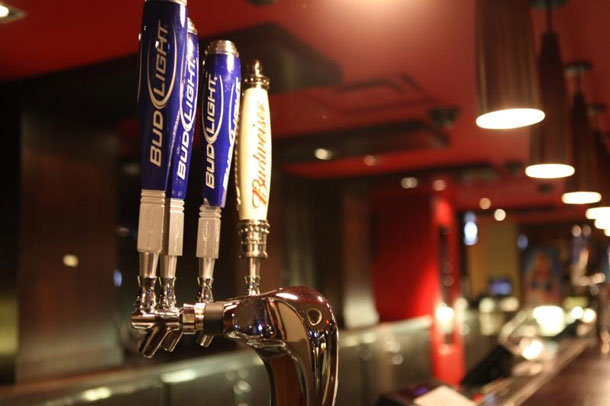 The most popular global beer brand is going green, with a sustainable power purchase agreement to make all its U.S. products with energy from an Oklahoma wind farm. Living on Earth’s Jenni Doering found cheers for the decision among Bud drinkers at a bar in Cambridge, Massachusetts, and Budweiser’s Vice President of Global Marketing, Brian Perkins, told host Steve Curwood why the company feels it’s a smart move for business as well as the planet.

CURWOOD: On Super Bowl Sunday, more than 100 million people come together around their big-screen TVs and chow down on everything from chicken wings to pizza to celebrate America’s most popular sport. And to make the party even merrier, many crack open a cold one. Often that’s a Budweiser or its sibling Bud Light. And while Bud Light is lighter in calories than most lagers, these days both brews have lighter carbon footprints. Starting this spring, the label on every can and bottle of beer Budweiser brews in America will show it was made using 100 percent renewable energy. So we asked Living on Earth’s Jenni Doering to find out what drinkers think about this popular beer going green – when it’s not St Patrick’s Day. So Jenni, I know this was a tough assignment – where was the information on tap?

DOERING: [LAUGHS] Well, Steve, where do you think? It was on tap along with the beer of course! At the wildly popular Newtowne Grille in Cambridge, Massachusetts. Last Friday night, I ran into Dan there. He’s a faithful Bud Light drinker, and I told him the news. 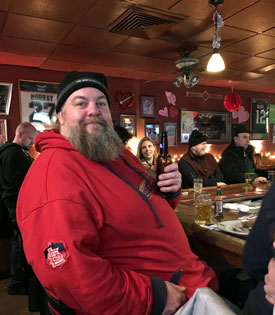 Dan is a frequent patron of Newtowne Grille and a faithful drinker of Bud Light. (Photo: Jenni Doering)

DAN: That’s a good thing! Because I mean you have to worry about global warming, and all the energy issues, it’s like, all the natural resources are going away; so we need to start thinking about how to make Bud Light in the future, for our future generations.

DOERING: Over at another table, half a dozen Millennials sat around a pitcher of Budweiser. Ashley is a grad student studying climate change. She thinks this is a big deal.

ASHLEY: I feel like their, like, advantages is in the volume, right? Like, they have such an influence because they sell so much product. So a small change like that, or a big change, can have a huge impact. I definitely applaud that – I think it’s a step in the right direction.

DOERING: The 100% Renewable Electricity label won’t go on Budweiser cans and bottles till April. But Steve, no one is waiting -- right now they seem happy to down a pint – or more – of this popular brew.

CURWOOD: Living on Earth’s Jenni Doering. And by the way Jenni, which one do you like better.

DOERING: Well, Steve, for me it’s gotta be the Bud Heavy, as the Millennials call it. 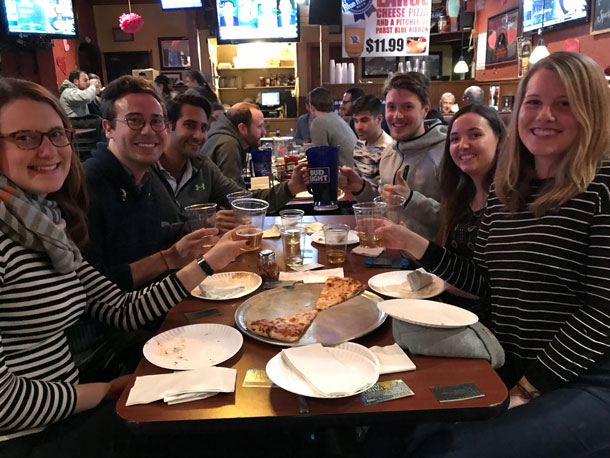 CURWOOD: Thanks, Jenni. So now let’s turn to Brian Perkins, Budweiser’s Vice President of Global Marketing for the inside scoop on these more sustainable suds. Brian, welcome to Living on Earth!

PERKINS: Hi, Steve. Thanks for having me on the show.

CURWOOD: So, Brian, what sells better ... Bud Light or the original Budweiser?

CURWOOD: So, how did this initiative for going green come about?

PERKINS: Look, people have been getting together for beers for over 3,000 years and beers made of natural ingredients, right? So, water, barley, malt, and in our case, rice, yeast and hops. And we ask a lot of the environment to make beer and enjoy beer. And so, if we're the biggest beer brand in the world, and we would very much like people to be getting together for beers for another 3,000 years, then we should make sure that we take a leading role in safeguarding that and making that happen. And so we went and talked to beer drinkers all around the world and we found that climate change is pretty much the number one social concern, particularly for younger beer drinkers, younger consumers, and we thought that it was time that we made a move to contribute towards solving that problem, or at least getting people talking about that problem, which is why we've decided to brew all of our Buds with renewable electricity and put that symbol on our packaging.

CURWOOD: So Brian, describe the logo for us.

PERKINS: Absolutely. So, I think our intent with the logo or the symbol was to be very, very simple, very getable and instantly recognizable. And so the symbol has the shape of a battery, just like you'll see at the top of your iPhone display, and in the middle it says 100 percent and on the top and bottom it says brewed with 100 percent renewable electricity from wind power.

CURWOOD: You want to get people charged up on sustainability?

CURWOOD: So, you sell your beer around the world. Here in the United States, where you sourcing the renewable electricity from?

PERKINS: Three or four weeks ago, a gigantic wind farm went live. It's called the Budweiser wind farm at Thunder Ranch in Oklahoma. It is owned and operated by Enel Green Power, and its reason for existing is the commitment that we made publicly to source all of our electricity from renewable sources. So, that commitment enabled us to sign a power purchase agreement with Enel and now that wind farm generates all of the electricity required to brew every Budweiser in the United States. So, if you enjoy a Bud today, you can rest assured that it is brewed with 100 percent renewable electricity. 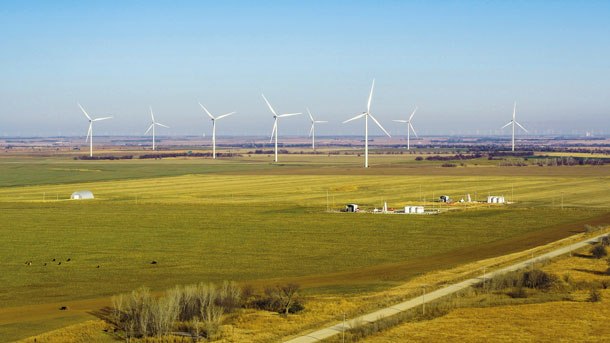 Budweiser has a power-purchase agreement with Thunder Ranch Wind Farm in Oklahoma to provide all of the electricity for its U.S. operations. (Photo: courtesy of Budweiser)

CURWOOD: Let's talk a little bit about economics. Here in the United States, a can or a bottle of Bud Light retails for less than a buck. How do you plan to keep Buds affordable while reducing the carbon footprint? In other words, how much is this costing you?

PERKINS: This is a very important point because the agreement to purchase all of our electricity from renewable sources, we believe is going to be at the same cost as purchasing electricity from coal-fired plants and from non-sustainable sources, and I think that's a good thing for people to start to understand and for businesses to start to understand that the cost of renewable power has been dropping, and now it's actually at a point where it's good for business. So, it was always good for the environment, and now it's actually good for business too. So, there should be no barriers now to us all embracing this and going big with this.

CURWOOD: Now, I understand that you were at the recent session at Davos at the World Economic Forum there. How do people perceive the move by Budweiser here? How did people respond to your view of corporate sustainability in those discussions?

PERKINS: I'll be a very honest with you, I was super nervous because it's a high profile event with a high profile crowd and you know it's not normally the place for beer company. We went there with the intention of announcing our commitment to brew with renewable electricity and to put it on the pack. So, I spent a lot of my time there talking to NGOs who've been trying to crack the problem of climate change and have been trying to bring businesses into the equation for many years. So, they really know what they're doing, and I was talking to them a lot to get feedback, and the other community that I was really there to talk to was other businesses because we would like this symbol to be bigger than Budweiser and bigger than beer. We'd like it to be a symbol that's embraced by many many different brands and consumer products and services, and we'd like it to become a movement. So, to that end we're offering this symbol free of any charge, of course, and we're offering for anybody to use it who shares the same commitment that we do. And since the meeting in Davos last week we've had multiple outreaches from multiple brands and businesses to start to explore the possibility of joining us on the movement and putting this symbol on their packaging.

CURWOOD: Hey, before you go, Brian ... so for the Super Bowl, what are you featuring in the Budweiser ads this year?

The new 100% Renewable Electricity logo will start rolling out on cans and bottles of Budweiser products in April, and is not trademarked in an effort to entice other companies to switch to renewable energy and use the symbol. (Photo: courtesy of Budweiser)

PERKINS: This year the main focus from Budweiser is a different type of social responsibility message, which is to highlight what we've been doing actually for decades now, which is disaster relief. And so whenever there been hurricanes, tornadoes, earthquakes, etcetera, in the United States which have created emergency situations and water shortages, what we've done where possible is we can quite quickly convert our brewing lines to instead of canning beer, we can purify water, because we make the beer with purified water, and so we can actually just channel the purified water straight to our brewing lines and seal it into emergency water cans. Again, we've been doing it for decades and especially with all of the many natural disasters that have happened in the last 12 months, the message here is about standing by America and being there for America when these disasters happen.

CURWOOD: And climate-related disasters really. Climate has potentiated all those storms and fires and such.

PERKINS: That's what we believe.

CURWOOD: Brian Perkins is Budweiser's Vice President of Global Marketing. Thanks so much for taking the time with us today.

PERKINS: Thanks very much for having me.


FastCompany: “Budweiser’s New Symbol Stands For Every Beer Made With 100% Renewable Energy”