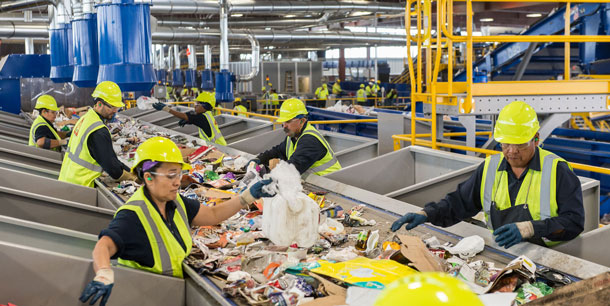 The Chinese government has announced that it will no longer accept recyclable plastic from the rest of the world. Ann Germain of the National Waste and Recycling Association tells host Steve Curwood that the US needs to play catch up and find alternatives to recycle the masses of plastic waste we create every day.

CURWOOD: China supplies the United States with everything from cell phones and computers, to TVs and washing machines, usually brought on large container ships.

And more often these days those container ship are taking American corn and other grains back to China, but there is a trade imbalance, and otherwise empty container ships can carry plastic and other recyclable materials to China at low rates. For years China wanted American plastic waste so it could recycle it back into consumer products. But no more. China has recently announced it will no longer accept plastic waste for recycling. Ann Germain of the National Waste and Recycling Association joins us to explain. Welcome to Living on Earth!

GERMAIN: Thanks. I'm happy to be here.

CURWOOD: So, why has China now decided that it no longer wants to recycle the world's plastic?

GERMAIN: So, first of all, China has looked at their environmental footprint, and so one of the things that they've been focused on is they don't want to be the world's dumping ground for everybody's trash, and part of their terminology when they instituted some of their bans reflects this. They refer to the material not as we do, which is as recyclables, but they refer to it as foreign waste. So, that is pretty indicative of how they view it.

CURWOOD: So, how many tons are we talking about? How much of the stuff that we're talking about has been going to China in the past?

GERMAIN: So, the total pounds of plastic bottles collected for recycling in the US was almost three million pounds, and that was for the year 2015. Of the total bottles, about 20 percent, were exported with the vast majority going to China. 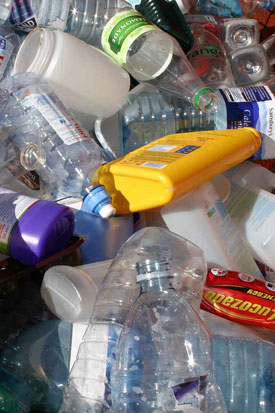 CURWOOD: I imagine that China which has been recycling plastic for quite a while has developed some rather sophisticated methods for recycling.

GERMAIN: China has some of the most sophisticated manufacturing facilities in the world. Unfortunately, they also have some of the least sophisticated operations in the world where it's really mom-and-pop operations, family businesses that don't exhibit any environmental controls. As they're taking some of the material apart there might be, like, wrapping that comes around the bottles, other parts that they might end up disposing of and perhaps they're not managing some of that material appropriately and it might end up in the waterways or other pollution could occur as a result. And so we understand China's desire to kind of shut down some of those operations in an effort to improve their environmental outcome, but at the same time, we think given some of the more sophisticated operations that they have, there's no reason that those operations should be punished by banning these materials.

CURWOOD: So, what's China going to do to make up for the plastic that they're no longer importing and recycling. I mean, they have a use for it now. How will they fill the gap between the reduced supply of plastic and their continued demand for it?

GERMAIN: First of all, there is the opportunity to use virgin materials, but they've also targeted recycling domestically, and they're hoping that with their increased middle class, utilizing a lot of the same materials, generating some of the same packaging materials that they might be able to supply their manufacturing sector from domestic sources.

CURWOOD: Hmm. So, China doesn't want this stuff. Why isn't it good business for us to keep it here in America?

GERMAIN: Actually, it is good business for us to keep it here, but our manufacturers do compete with China for that material so it's a commodity and it is offered up for sale at the highest price. And so, some of it stays domestic and some of it does get shipped overseas. Now because of that, one of the things that's happened is we expect that there's going to be market adjustments that are going to be made and that domestic markets will further develop as a result of this ban. Unfortunately, those markets can't develop overnight. Unlike with other sectors where the mining industry can perhaps close down the mines for a little bit of time until the markets catch up, we can't shut off the taps for the recycling. It comes in, week in and week out. So, we need to have a use for that material. 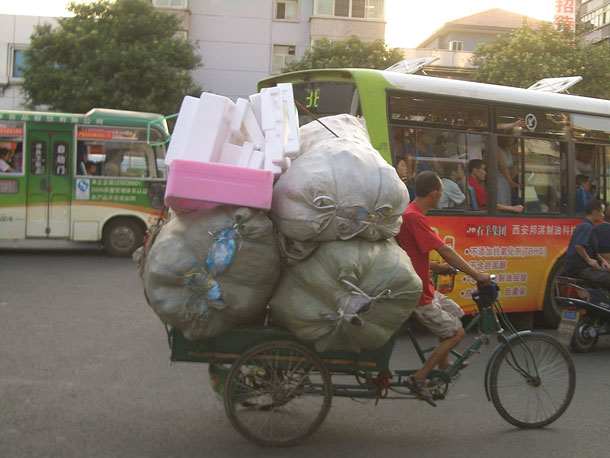 Recycling plastic can be a small family business in China. (Photo: Wikimedia)

CURWOOD: So, what's going to happen with all the plastic that we're dutifully putting in our recycling bins here in the US? I mean, if there's a smaller market for this stuff, sounds like it's going to wind up in the local landfill.

GERMAIN: If that happens, it will be temporary and everybody is working really hard to try and find alternative markets as quickly as we can, so if anything ends up going to landfills, it will only be on a temporary basis and we don't expect that to happen to the really high quality materials.

CURWOOD: So, there's this perception that when we send our plastic water bottles and such to China that it comes back in the form of products, that this is indeed recycling. How real is that perception?

GERMAIN: Most of the material that we send over there kind of comes back, you know, in the form of other goods, not necessarily bottle-to-bottle. So, for example, some of the material end up in crates and buckets, films and sheets, lawn and garden products, other non-food bottles, things like that, lumber and decking. So, there's a wide range of different products that these materials can be made into and it's really...if you've got high quality product there, as long as it's the same plastic, there's no limit to what it can be made into.

CURWOOD: Ann Germain is Vice President of Technical and Regulatory Affairs for the National Waste and Recycling Association. Thanks so much for taking the time with us today, Ann.

GERMAIN: Thanks, Steve. I really appreciate you talking to me.