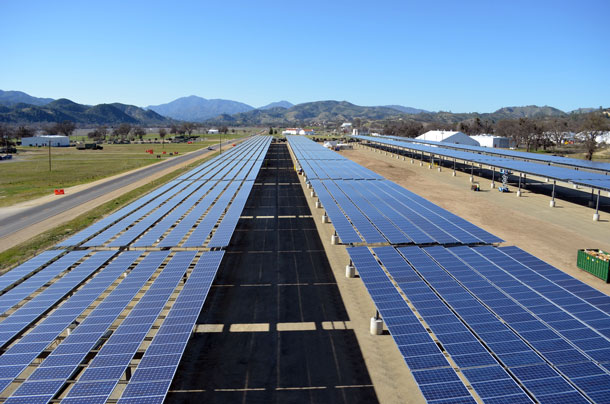 The US solar market year saw a downturn in 2017 for the first time since 2010. But though the fall in jobs coincided with Donald Trump's first year as President, the Council on Foreign Relations’ solar expert Virun Sivaram tells host Steve Curwood that market trends and Capitol Hill policies are more responsible for shaping the future of American solar.

CURWOOD: From PRI, and the Jennifer and Ted Stanley Studios at the University of Massachusetts, Boston, this is Living on Earth. I’m Steve Curwood. Solar is under a cloud in America. Until last year sun power had a big run in job creation, but the Solar Foundation reports that 2017 saw about a four per cent decline in solar jobs, with installers taking the biggest hit. And recently the Trump administration moved to impose a tariff on imported photovoltaic solar panels, which will likely raise costs and further dampen consumer demand. Varun Sivaram is a fellow at the Council on Foreign Relations and author of “Taming the Sun: Innovations to Harness Solar Energy and Power the Planet.”

SIVARAM: Since 2010, the cost of solar power has fallen by over three quarters, and that's largely been fueled by cheap solar panels manufactured and exported from China, and elsewhere in Asia. So, thanks to this boon of really low cost solar panels, we've managed to bring down the cost of solar, both in the United States and worldwide. This is a global trend, and so as a result the market has just taken off. We've seen year-over-year growth almost every year. But then from 2016 to 2017 we saw a dip and a lot of commentators noted that dip happened to coincide with President Trump's first year in office.

CURWOOD: [LAUGHS] Yeah, so, suddenly this market is booming, prices are low, why a drop then in solar jobs?

SIVARAM: It's actually not the case that Trump's policies caused this drop from 2016 to 2017. That's actually an artifact, a blip that if we had left alone would have quickly been smoothed out. See, in 2015, Congress went down to the wire on whether or not to extend a particular policy that was going to help solar installations - the investment tax credit. They decided at the last minute to extend the subsidy for five more years, but everybody thought it was going to expire in 2016. And so, all the solar developers moved up the timeline of their projects so they'd get them done in 2016 and took them out of the pipeline for 2017. So, we saw this momentary glut of solar installations in 2016 and a natural drop back in 2017. But that was a momentary blip, and so this had to do with Obama era policies and a congressional debate in 2015, nothing really to do with President Trump's policies. But that's not to say that President Trump's policies won't matter going forward.

CURWOOD: Yes, and now the Trump administration is in the process of imposing a tariff on solar panel imports, and there were fears that that would happen long before he actually implemented at the beginning of this year. So, what do you think that those fears contributed to the downturn in 2017?

SIVARAM: You know, I don't think those fears contributed much to the downturn in installations or jobs in 2017, but the fears and the actual impacts of the tariffs are definitely going to matter in 2018 going forward. The best estimate we've got is that from 2018 to 2022, the amount of solar installed in the United States will be about 11 percent less because of the tariffs than they would have been without those tariffs. The tariffs by the Trump administration are going to raise the cost of solar power in the US. 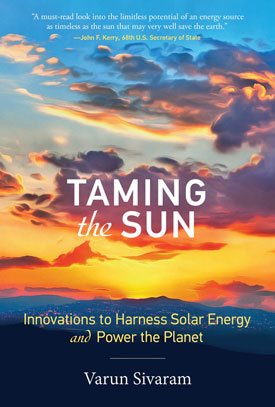 Sivaram's book is Taming the Sun: Innovations to Harness Solar Energy and Power the Planet. (Photo: courtesy of Varun Sivaram)

CURWOOD: So, talk to me about where most of the jobs come from in the solar industry.

CURWOOD: Now, the Trump administration says that the tariff will help protect American jobs. To what extent is it true?

SIVARAM: That sounds right on paper. The Trump administration says, “Look, the Chinese government supported their domestic industry unfairly putting US businesses out of business”, so the Trump administration is now going to go and protect US businesses and try and bring back manufacturing jobs. Unfortunately, that's not how it's going to play out in reality. The Trump administration tariffs only last four years, and they actually get sliced in half over those four years and that's not very much investment certainty for a US company to go set up a big expensive factory in the United States. So, I don't actually expect these tariffs to help create manufacturing jobs in the US. This is kind of like closing the barn door after the horse has bolted. The Chinese state support came a decade ago, but now Chinese and Asian manufacturers are able to just achieve low cost by themselves without government incentives, and for the US to catch up it's not enough to put these kind of half-hearted tariffs on imported solar panels. It won't encourage investment in the US. It'll probably reduce installations and we gotta help bring it back.

CURWOOD: OK. So, what's the answer? 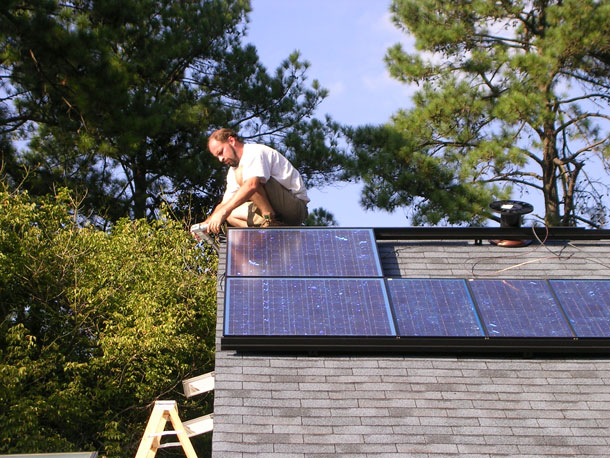 Nearly 80% of the jobs in the solar industry come from the demand-side sector, through jobs such as installation. (Photo: Melanie Bateman, Flickr CC BY-NC-ND 2.0)

SIVARAM: That answer is what I write about my book, "Taming the Sun". I argue that it's going to take innovation in solar for the United States to once again lead in the industry and capture share of this growing market, and unless we invest in innovation and the research development and demonstration of brand new technologies, we're not going to be able to compete at China's own game. China's own game is manufacturing existing old technology at enormous scale. For us to breakthrough, we're going to need innovative new technologies. I've worked on some of these as a physicist in the lab and they are phenomenal technologies.

SIVARAM: For example, the front-runner technology known as Perovskite solar panels, these could enable low-cost highly efficient flexible coatings. You could one day paint your house with a solar coating. You could wrap skyscrapers with this. You could put it on weak roofs in the developing world. There are remarkable technologies that are there in laboratories that the United States could commercialize.

CURWOOD: Now, your analysis says that the slowdown really began, frankly, linked to Republican opposition to extending the solar tax credits on Capitol Hill during the Obama years and then now compounded with the tariff that Mr. Trump is imposing. At the end of the day, how much does that put us behind our goals, say, to respond to the Paris climate agreement?

SIVARAM: I actually fault both sides here. I think that the tax credits themselves, which were scheduled to expire in a massive way in 2016, created this window of policy uncertainty. Sure, Republicans opposed them, and therefore it went down to the wire on whether we were going to extend them or not, but frankly going forward the tax credits didn't need to be extended for that long. Solar is already economical in the United States and we ought to have seen a quicker ramp down of the tax credits based on what's economical and not. So, I don't want to pin this on Republicans and say that Republicans oppose solar and, therefore, solar's not doing well. This is a bipartisan issue. Republicans and Democrats have useful things to say on it. I do believe that the Trump administration is taking the wrong approach. It should not pull out of Paris at all, it absolutely should not be imposing tariffs, and it should be investing far more in research and development than it plans to. But let's not turn this into a Republicans against Democrats issue on support for solar because I actually think both sides get some things right and some things wrong.

CURWOOD: So, what would you say are the biggest threats to the solar industry right now?

SIVARAM: I think the solar industry's biggest threat is itself. You know, over the next decade, solar energy is going to become very hard for the grid to tolerate. That's why we've got to plan right now, so that solar doesn't become a victim of its own success. See, when solar's one percent or less of total electricity, it's not that hard to worry about, it's not that hard to integrate it onto the grid. But what if solar gets to 10 or 20 or 30 percent? At that point we're going to have so much solar it'll be a nuisance to integrate this highly volatile energy source. And that's why, you know, we keep coming back to the same things. We need far cheaper solar, revolutionary technologies, and we need much better systems, you know, cross continental transmission grids that can take solar from places of excess to places of scarcity or ways, for example, to intelligently turn on and off millions of thermostats and water heaters and space heaters so that they can mop up excess solar electricity on the grid and use it when it's available. There are lots of innovative systemic fixes that we can make and we really should be worried about solar collapsing under its own weight because right now, it's growing very healthily, but in a decade or so there could be so much of it that we don't know what to do with that solar, and unless we prepare for that right now we'll find ourselves in a difficult situation.

CURWOOD: The current budget advanced by the Trump administration would really cut the Department of Energy's funding for this kind of research. 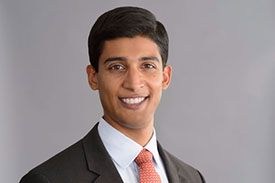 SIVARAM: Absolutely. I think it is, it would be catastrophic if Congress accepted the president's request, you know, it just came out this week to cut renewable energy research and development by over two-thirds, to cut ARPA-e, this agency that does farsighted technology bets across energy technologies. They want to eliminate it entirely. It would be catastrophic. Fortunately, there is basically zero chance that Congress accepts this budget recommendation. Last year, the Trump administration did the same thing. Congress categorically rejected it, it was Congressional Republicans who rejected it, Senator Lamar Alexander, Republican, who said, absolutely not...we believe in funding the kinds of transformative energy innovations that ARPA-e funds. I'm relieved that Congress so far has acted as a bulwark against President Trump's energy innovation recommendations, which would just be catastrophic.

CURWOOD: Varun Sivaram is a Fellow at the Council on Foreign Relations whose new book is called "Taming the Sun: Innovations to Harness Solar Energy and Power of the Planet”. Varun, thanks so much for taking the time.

SIVARAM: Steve, thanks so much for having me.