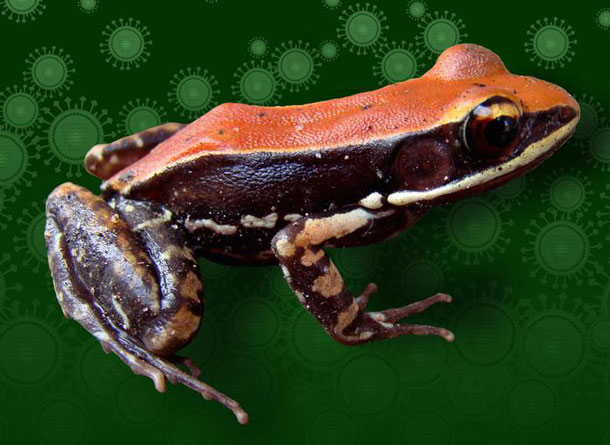 CURWOOD: It’s Living on Earth, I’m Steve Curwood. In a minute – why the annual flu shot sometimes misses the mark – but first this note on emerging science from Don Lyman.

LYMAN: Brilliantly colored poison dart frogs are notorious for the deadly poisons they secrete, but now scientists have discovered South Indian frogs are also deadly -- to flu viruses. Researchers from Emory University’s Vaccine Center and the Rajiv Gandhi Center for Biotechnology in India found that peptides - short chains of amino acids, the building blocks of proteins -- from the skin mucus of these frogs kill the H1 flu strain.

Scientists knew that frogs’ skin secreted "host defense peptides" that protect them against certain bacteria. But this new finding implies that the skin peptides may protect against viruses as well. The scientists named one of the antiviral peptides “urumin”, after an ancient Indian whip-like sword called an “urumi”. Urumin appears to disrupt the integrity of the flu virus by binding to a protein called hemagglutinin. Given intranasally, urumin protected unvaccinated mice against lethal doses of some H1 flu viruses, though it doesn't work for all strains.

The scientists think anti-flu peptides could be useful when vaccines are unavailable, in the case of a new pandemic strain of flu, or when circulating strains become resistant to current drugs. Now the researchers are looking for frog-derived peptides that might be active against other viruses, such as dengue fever and the Zika virus. That’s this week’s note on emerging science, I’m Don Lyman.


Original study in the journal Immunity

CNN/i>: “Researchers use frog mucus to fight the flu”