The Indonesian government is pledging to make water in the Citarum River drinkable by 2025. (Photo: Chief, Wikimedia Commons CC BY-SA 4.0)

This week Peter Dykstra and host Steve Curwood look Beyond the Headlines at the proposed cleanup of the Citarum, possibly the world’s dirtiest river, and discuss the recent arrest of a high ranking official in connection with the 2016 murder of Honduran environmental activist Berta Cáceres. And they remember a 1925 Tennessee law that prohibited schools from teaching evolution and created a courtroom circus, the “Scopes Monkey Trial,’ later recounted in a book and movies with the title, Inherit the Wind.

CURWOOD: Off to Atlanta, Georgia, now for our regular check in on the world beyond the headlines with Peter Dykstra. Peter’s an editor with Environmental Health News, that’s ehn.org and DailyClimate dot org – hi there, Peter. What did you find this week?

DYKSTRA: Hi Steve. You know, there are a lot of rivers in a lot of countries, like India and China, that may have a good claim to be the world’s dirtiest river.

DYKSTRA: That’s absolutely true. But the Citarum River, which runs through Jakarta, the capital city of Indonesia, has a fantastic claim.

CURWOOD: So what’s going on there?

DYKSTRA: Well, they have 2,000 textile mills upstream from Jakarta. Ten million people in Jakarta, 80 percent of them rely on the river for everything from household water to drinking water. There are sewage problems, there are trash problems, and the Indonesian government is launching an effort to clean the river up.

CURWOOD: Yeah, how are they gonna fix all that?

DYKSTRA: Well, they say by dredging the bottom of the river, which is heavily polluted, there are lead pollution problems there; they’re going to tighten the laws about dumping into the river; and, finally, enforce the laws. They’ve been largely unenforced. And they say they can make the river drinkable by the year 2025.

CURWOOD: That’s a long way to wait if you can’t afford bottled water. Hey, what else do you have for us today?

DYKSTRA: Well it was almost two years ago to the day that a Honduran activist named Berta Caceres was murdered in her home. 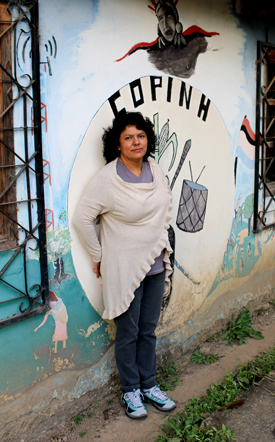 An energy company executive was arrested in connection with the murder of environmental activist, Berta Cáceres. Cáceres, pictured above, was fighting against the construction of the Agua Zarca Dam, a project that was later cancelled in response to the protests and her murder . (Photo: coolloud, Flickr CC BY-NC-ND 2.0)

CURWOOD: Yeah, she was a Goldman Prize winner a few years ago for her work to stop a dam that was destroying her local community.

DYKSTRA: That’s right. And just this past week they arrested a man who’s said to be the “mastermind” of her murder. His name is Roberto Davis Castillo, he’s a former Honduran intelligence officer who became an executive in the electric company that’s building the dam.

CURWOOD: And where did they pick him up?

DYKSTRA: They picked him up at the airport. He was trying to flee the country on his way to Houston.

CURWOOD: Now, Latin America’s not a great place for environmental activists, as you’ve told us in the past.

DYKSTRA: Yeah, we mentioned a few weeks ago that there were nearly 200 environmental activists and earth defenders killed around the world in the past year, in 2017. 60 percent of those were in Latin America.

CURWOOD: So, what are the Latin American and Caribbean nations going to do about this?

DYKSTRA: Well something promising happened within the past week. Twenty-four Latin American and Caribbean nations signed a pact promising, among other things, that environmental defenders would be better protected. And that if there were future murders, that they would be fully investigated and prosecuted.

CURWOOD: Sounds good, but so far, they haven’t really been able to protect these people.

CURWOOD: Hey, what do you have for us from the history vault today? 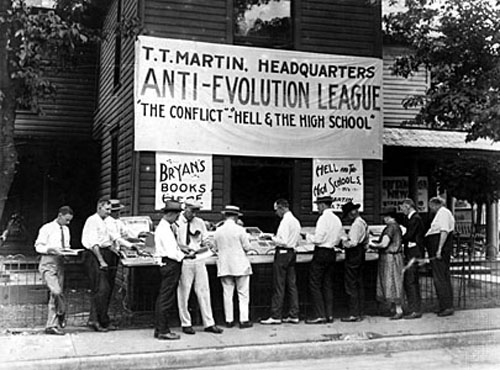 CURWOOD: Oh yeah, that led to the Scopes “monkey trial” if I recall.

DYKSTRA: That’s right. And where you have monkeys, you’re going to have a circus. It was a show trial to end all show trials. John Scopes was a substitute high school teacher who was convicted of teaching evolution. He was fined $100 – that fine was overturned on appeal.

CURWOOD: Yeah, and as I recall, in the sixties there was a movie called Inherit the Wind. Spencer Tracy played Clarence Darrow, who was John Scopes’ lawyer, and there were a lot of stars in that movie. And I guess the issue is still relevant today, huh?

DYKSTRA: It is relevant today. The Butler Act stayed on the books actually until 1967. But in this day and age, in 2018, we still have battles over evolution versus Creationism teaching in science classes, in school boards and states, and local jurisdictions across the country. So, maybe that means we haven’t evolved as much as we thought.

DYKSTRA: Okay, thanks a lot Steve. Talk to you soon.