CURWOOD: It’s Living on Earth, I’m Steve Curwood. The North Atlantic Ocean Conveyer belt, better known as the Gulf Stream, carries heat from the tropics along the US East Coast and then over to Northern Europe. In the summer it also carries game fish like tuna, and bonito as far north as New England. These big fish scoot back south as winter comes on, but tiny tropical fish larvae, babies that were also caught up in the Gulf Stream, lack the fins and strength to make it back to warmer waters, and they typically perish. Unless-- and it’s a big unless ---they wash in close to shore and are rescued by volunteers and scientists. Living on Earth’s Noble Ingram has our story.

INGRAM: It’s a warm September Saturday, and a crowd has gathered on a rocky cove at Fort Wetherill Park in Jamestown, Rhode Island. The beach is peppered with plastic tubs and clipboards. A team of scientists and volunteers is pulling a massive net, called a seine net, full of flopping silver fish through the shallows.

CROWD: Wow what’s this? Wow. Woah! So many of these. This is nuts. This is so cool. This is a menhaden. This is also in the herring family. 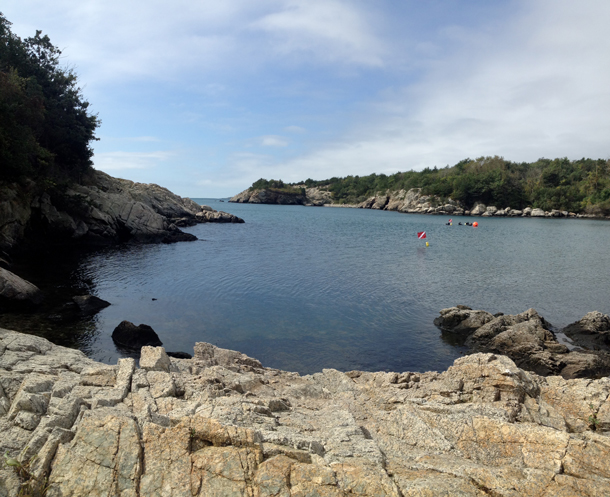 After a cloudy morning at the rescue, the sky cleared, allowing for exceptional water visibility. (Photo: Noble Ingram)

INGRAM: But these are not the fish they’re looking for. Along the shoreline, four divers waddle slowly into the water. Each carries a Tupperware container and what looks like a small butterfly net. The water is clear and the sun is shining but this is no ordinary fishing trip. This is a rescue mission.

DESMARAIS: These fish are going to die because of the water turning cooler as the fall and winter comes. So hey, might as well take the opportunity to rescue them…

INGRAM: That’s Leonor Desmarais. She’s a long-time scuba diving enthusiast and a member of the New England Aquarium Dive Club, a volunteer organization that often partners with the aquarium. As she explains, the group has come to Rhode Island in search of an unusual kind of fish that desperately needs saving.

DESMARAIS: … It is a hunt because you’re hunting for them. You’re just not killing them when you find them deliberately. You’re rescuing them from a certain death to a possible survival.

INGRAM: These threatened sea creatures aren’t native, but they’re not invasive either. They’ve been spotted all throughout New England, and just over 100 miles away, on Nantucket Island, the Mariah Mitchell Aquarium has a small collection of them. On a July afternoon, a staff intern named Jack leads a tour into a room of bubbling fish tanks. Most of the animals here are locals, including the aquarium’s beloved Atlantic lobster, Clementine. But two tanks hold flashier foreigners. 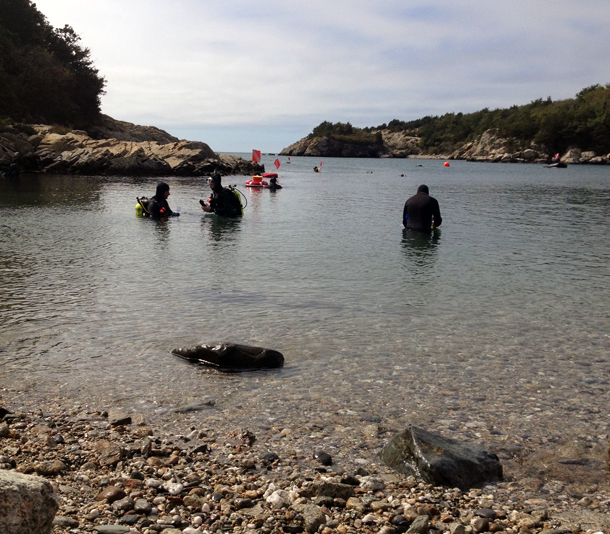 DUBINSKY: Our first tropical stray that we have here is our buffalo trunkfish. It was collected two years ago in Madaket Harbor. And what we suspect is these fish spawned somewhere in the Caribbean or somewhere subtropical like off the Carolinas and as juveniles, when they were really weak, they got caught in the Gulf Stream, which is a big current that makes its way up the US eastern seaboard. And there’s a little spigot of it that comes out towards Massachusetts here.

INGRAM: As Jack explains, this tropical fish was found here in New England after riding ocean currents for hundreds of miles. Now three years old, this blue blob is about the size of an apple, with a face that’s strangely reminiscent of an Easter Island stone head. It’s known as a Gulf Stream Orphan.

DUBINSKY: As a little baby, this buffalo trunkfish was the size of a blueberry when we caught it.

INGRAM: As Jack points out, the fish has grown fast. And now, it’s attracting some serious attention from visitors.

MCKAY: He’s got a lot of personality. Hi, you’re very handsome… Hi, I think you’re my friend. I wouldn’t mind finding one of you.

HOIGHT: He kind of looks like a truck of some kind or a weird UFO.

INGRAM: The buffalo trunkfish is not the only tropical species to be carried into New England. Others include bright yellow Spotfin Butterflyfish and Atlantic Blue Tangs, relatives of the Pacific fish featured in the Finding Nemo and Finding Dory films. After the tour, Jack steps outside onto the beach. 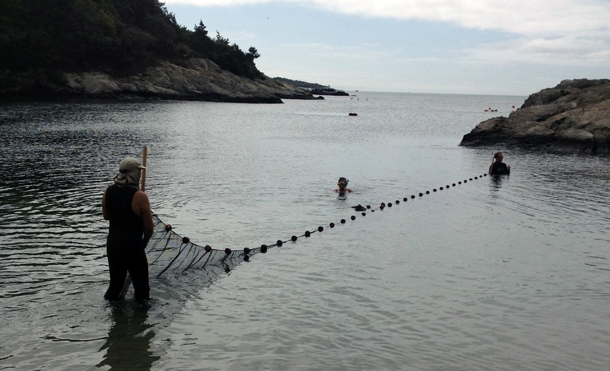 DUBINSKY: Personally, ever? A flying gurnard was a really rare tropical that we caught five years ago. It’s this beautiful fish with bright iridescent blue wings. Usually only found in the Caribbean. We had it at the aquarium for four years and it got so big we donated it to the New England Aquarium.

INGRAM: As an adult, the Flying Gurnard looks like a glowing purple Frisbee. And biologists at the New England Aquarium were thrilled to receive it. One in particular, Mike O’Neil, manages the Giant Ocean Tank there, and is completing a PhD studying Gulf Stream Orphans.

O’NEIL: So we met the Maria Mitchell Association at the Hyannis ferry and received this flying gurnard from their facility. They had him set up in a nice temperature-controlled cooler— very well-packed.

INGRAM: Raising a captured tropical orphan is no simple task. Five years in, that flying gurnard died from a bad eye infection. But plenty of other orphans at the aquarium have survived and thrived. And for Mike, gazing into the New England aquarium’s vast Caribbean collection, saving these fish from a deadly fate drives his studies.

O’NEIL: We went down for one of the field collecting trips and I could not believe that the fish we were going to be bringing back we would find normally in the Caribbean. And one of the first fish that we found was a permit, when we found it a very small, plain silver fish. 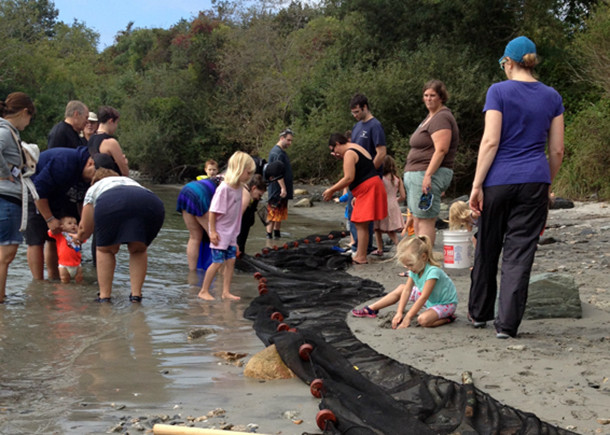 Volunteers of all ages parse through their catch, looking for Gulf Stream Orphans. (Photo: Noble Ingram)

INGRAM: Mike nods at the tank and points to a glistening fish the size of a bicycle.

O’NEIL: But it’s actually one of the two largest fish in our Giant Ocean Tank right here; they get to be maybe a hundred pounds or so and a couple feet long. It was like an out-of-body experience at first being like, “We could raise this up and bring it back to the aquarium and it could live in the giant ocean tank for a decade or more and be this massive animal”.

INGRAM: As Mike explains, even the mighty permit was found as a tiny grey speckle. That might be the biggest challenge to finding orphans: unlike the colorful adults we recognize, juvenile tropical fish look mostly like seafloor pebbles.

O’NEIL: That brown blob is a trunkfish. You can see his little mouth and his two eyes there, when we collect them, they’re teeny tiny. They get to be about football-size when they’re full-grown.

O’NEIL: Yup. That’s one of the ones that when you come across, it’s usually just sheer luck that you happen to be seining in the right spot and then as you’re looking through it instead of looking at pebbles you’re like, “Oh wait this one actually has fins and is alive”.

INGRAM: That luck is critical – and not just for the rescuers. As Leonor mentioned earlier, Gulf Stream Orphans can tolerate New England’s warm summers, but when water temperatures plummet in the fall, fish that can’t stand the cold die. And that brings us back to Jamestown in September. Mike O’Neil is here along with his colleague Mike Whyte. The pressure is on to find these orphans, Whyte says.

WHYTE: They’re going to die. It’s inevitable. They will die probably within the next month. So if we can get it and bring it back and use it in our exhibits it sends a big message out. So it’s very important. 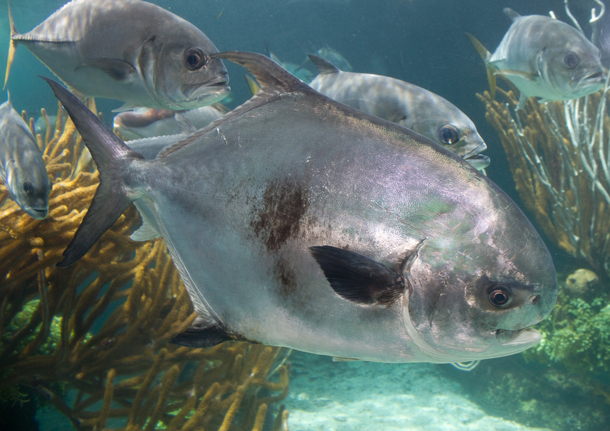 An adult permit swims through a coral reef in its native Caribbean. When fully-grown, these fish can top out at 50 pounds. (Photo: Brian Gratwicke, Flickr CC BY 2.0)

INGRAM: But so far, this year’s haul isn’t looking promising. Three hours in, a few divers have made sightings, but every net is still empty.

BEACH PERSON: One of the divers who’s with the aquarium saw a Spotfin but didn’t have any luck in catching him.

WHYTE: Nothing in the nets yet but we’re going to try the seining and see what we come up with there.

INGRAM: Each time the seine net comes in, Mike and the dive club find a new tangle of fish, but they’re all locals.

O’NEIL: We don’t have anything tropical in this guy.

INGRAM: Then, amid the controlled chaos of another haul, a pair of divers head over to Mike with a gallon-sized plastic tub. Mike points to a brown spot swimming in their catch.

O’NEIL: That little dark guy with a red eye is a permit.

O’NEIL: Yup, that’s stress coloration. He’s figuring out why everyone’s looking at him.

O’NEIL: Yup, that permit is definitely on the Gulf Stream Orphan list. Definitely at that size that guy is maybe half an inch long, something like that… they’ll grow up to be very, very large.

INGRAM: Mike hands the tub, and its future 50-pound fish, back to the divers. The proud rescuer poses for a photo with the permit. For now, the dive club will have to be content with their single rescued orphan. 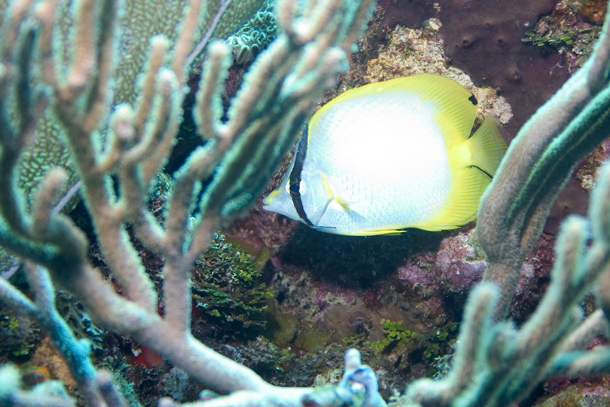 An adult Spotfin Butterflyfish weaves through coral in the wild. Though these fish were spotted at the rescue, none were caught. (Photo: Kyle Johnson, Flickr CC BY-NC-ND 2.0)

O’NEIL: Fish-wise, little bit left to be desired. We did get a few reports of tropical fish and we do have one permit in hand. So from a New England Aquarium perspective, not ideal for the collection animals, but for the Gulf Stream Orphan project, definitely excellent data. Weather turned out great, dive conditions were perfect. Can’t ask for much more.

O’NEIL: Oh yeah. Absolutely. Particularly to see future marine biologists in training out here, and getting wet and learning about their native environment - it’s the way to go.

INGRAM: Every fall, the New England Aquarium Dive Club’s event gives citizen scientists of all ages the chance to save just a few tropical fish caught in the region’s cooling waters. Thanks to this year’s outing, more people are now enlisted orphan rescuers. And one tiny permit here gets to make it past October. For that, at least, it seems safe to call it: mission accomplished. For Living on Earth, I’m Noble Ingram in Jamestown, Rhode Island.