Phytosaurs hadn’t been found in Utah before this discovery. Paleontologist Rob Gay describes these creatures as “alligators with blowholes.” (Photo: The Carouselambra Kid, Flickr CC BY-NC 2.0)

A thick bonebed of Triassic era fossils was recently discovered within Bears Ears National Monument. But the Trump Administration has slashed the Monument’s size, leaving the site more vulnerable to vandalism. Paleontologist Rob Gay explains to host Steve Curwood that the fossils provide vital clues to the past but the new Monument boundaries jeopardize future research and excavation.

CURWOOD: Now for Native Americans, the Bears Ears region in Utah, with its towering mesas and red rock canyons, is sacred ancestral land. Over 200 million years ago, giant reptiles wandered in Bears Ears leaving a vast cache of recently discovered Triassic-era, fossilized bones. In December 2017, President Trump reduced the size of the Bears Ears National Monument by 85 percent, just one year after its designation. The move favored the potential for oil and gas exploration, but has left paleontologists like Rob Gay worried about the fate of the region’s rare fossils. Rob works with the Museums of Western Colorado and joins us now. Welcome to Living on Earth, Rob.

GAY: Thanks. Glad to be here.

CURWOOD: So, tell me the landscape. What does it look like around Bears Ears?

GAY: So, I've heard it described before as a classic western American landscape. If you look on the HBO show Westworld, some of the scenes there were filmed near this area. A lot of classic Westerns from the ’50s and ’60s have also been filmed in the Bears Ears region just to the south in Monument Valley as well as in Valley of the Gods. You have red cliffs, open vistas, towering snow-capped mountains in the distance, high plateaus covered in low, shrubby forest and deep hidden canyons.

CURWOOD: And tell me what you found in the way of fossils at Bears Ears? And what kind of formation were they in?

GAY: So, my team and I have been looking at what's called the Chinle formation in Bears Ears National Monument for quite some time now. It dates from the dawn of the age of dinosaurs and we found all sorts of amazing fossils...plant eating crocodile teeth and we've found footprints that indicate that armored herbivorous crocodiles walked the landscape, and then most recently we came across a huge deposit of fossilized bones from animals called Phytosaurs. These are 15 to 20 foot long crocodile mimics with blowholes.

CURWOOD: Oh my, and these date back to how many million years ago?

GAY: So, the Chinle formation spans about 225 to about 200 million years ago. These Phytosaurs that we've been finding are probably about 212 million years old. 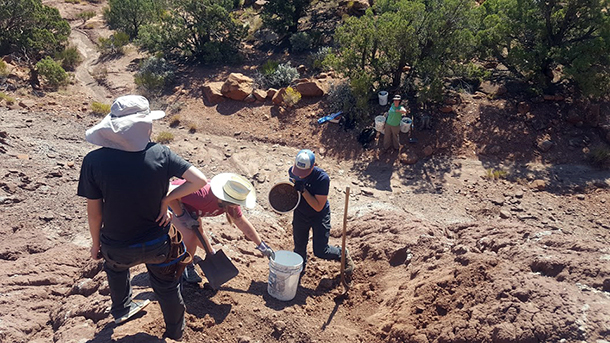 Gay estimates there are decades of work to be done researching this fossil site. (Photo: courtesy of Rob Gay)

CURWOOD: That is old. Rob, what is the significance of the fossils that you found at this excavation?

GAY: So, this site is significant for many reasons. First of all, the site is enormous. It's about 63 meters long, which makes it the largest Triassic bone bed in the state of Utah, and based on our limited excavation in 2017, the amount of fossils we're finding in there means it's one of the densest probably in the country, if not the entire world. And on top of that, the fossils that we're finding, that we've been able to identify so far, all come from an animal that has never been found in Utah before. In fact, it's only been found in the petrified forest of Arizona, and that was a recent discovery. So, it's not well known. It seems to be a very rare animal, and all of a sudden we've got the world's largest treasure trove of this animal.

CURWOOD: At risk from development now at Bears Ears now since it's not protected.

GAY: So, all federal land has some basic protection for vertebrate fossils, but within a Monument there's additional protections for not just vertebrate fossils but also for invertebrate and plant fossils. So, things like snail shells and clam shells and plants, things that help us discover what this environment was like 212 million years ago. Without a monument, anyone can come and collect plant fossils and shells legally, it's not prohibited whereas in a monument, that activity is restricted to permitted scientists.

So, there's that aspect, but there's also the aspect of development such as power lines, mines, roads, trails, and when it was in a national monument this was protected in what's called the national conservation land system which is a system of BLM lands across the west mainly, National Monuments, National Conservation Areas, National Historic Trail, things like that, and there's funding specifically set aside for Congress for scientific exploration of these National Conservation Lands. So, now that this site is no longer in a national conservation land, it's not eligible for these funding sources. 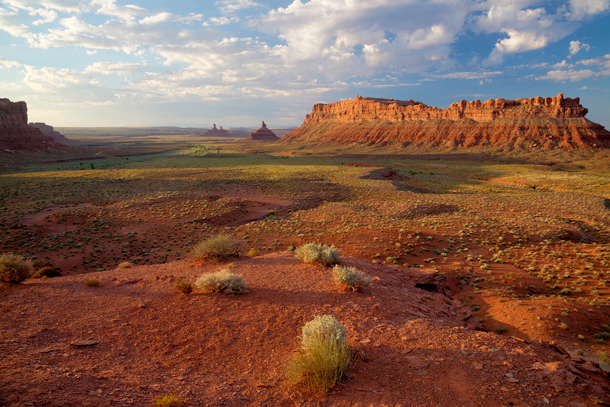 The Valley of the Gods, which is located at the southern end of the original Bears Ears National Monument boundary, is now located outside the monument following the Trump Administration’s decision to shrink the monument by 85 percent. (Photo: Bureau of Land Management, Flickr CC BY 2.0)

CURWOOD: Now, part of your job as a paleontologist is a detective, right, and what do you think happened at this spot that you have all these fossils within this particular place?

GAY: So, we've got some clues, but that's one of the things we're hoping to figure out and without the funding it's going to be really difficult to perform the excavations and analyses that we need to. So, we have all of these bones and they're all generally articulated. So, that means in life position, like you'd have a skeleton in a body today, and they're all jumbled on top of one another. So, that tells us that something quickly killed these animals and then covered them over. Additionally, we know by looking at the rocks that these are preserved in a fossil soil, so this wasn't the bottom of a river or a lake or a pond. But there was certainly some water present because we also have a clamshell from this deposit. We also some plant fossils, cycads, these are a group of plants that are still around today and that tells us that this wasn't a swamp. You don't find cycads in swamps, so we're not sure what happened to these animals, but it appears that something killed these animals probably near a river, but on dry land where there are plants growing.

GAY: [LAUGHS] A very bad day in the Triassic.

CURWOOD: Rob, I know that you're a paleontologist, you're not a geologist who's involved in extraction of fossil, oil, and gas, different kind of fossils for you, but in general, what's your understanding of what the commercial potential is there? I believe people say there's oil, there's gas, even uranium.

GAY: Yes, so in the 1920s and 1930s, the area was extensively drilled, looking for oil and gas deposits. There was a concentrated effort because of some of the underlying geology of the region, and those all came up with nothing. In terms of other fossil fuels like coal, there is coal within the boundaries, but it's not in what I would imagine to be commercially mineable amounts. We're talking about coal seams that are three inches thick and extend for maybe 100 yards.

The biggest historical use of the area in terms of economic geology has been uranium, and the uranium boom of the ’50s and ’60s really fueled the development of roads into the area and ironically fueled the development of our scientific understanding of the fossils in the region because these localities and these exposures were opened up due to these uranium mining roads. There's been plenty of talk recently about expanding uranium development in the area that would severely threaten fossil resources and while that is a possibility, the fact that existing mines that are in the area are not producing uranium, tells me that the commercial value of the uranium in the ground, it's probably not too high. 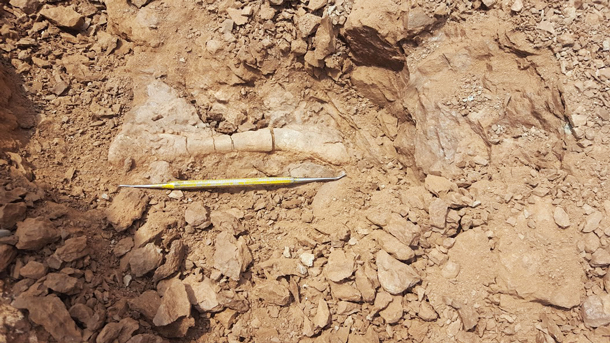 Part of a phytosaur fossil unearthed by the excavation team. (Photo: courtesy of Rob Gay)

CURWOOD: So, given what's happened there – the shrinkage of Bears Ears National Monument – what would you say to someone who asks you, why is this work important?

GAY: This site is from a very interesting time in Earth's history, and not long after this site was formed there was a huge extinction – one of the major mass extinctions in Earth history. Dinosaurs survived through it. Everything else that we're finding there went extinct. So, if we can better understand these animals and the environment that they lived in, we have a better idea of understanding why dinosaurs were able to survive this huge extinction which seems to be related to the supercontinent of Pangea breaking apart and causing enormous sudden catastrophic global climate change.

GAY: Yeah, might be important to understand how that's gone down in the past.

CURWOOD: So, Rob what are your next steps for these phytosaur fossils on the excavation project?

GAY: So, I'm looking for funding to continue this work and also to continue exploration in the region. Outside of the funding stream, the next steps are to figure out what the heck we actually have, what did we pull out of the rock. So, the fossils are currently undergoing preparation at the St George Dinosaur Discovery site in St George, Utah, where they are being removed from their rocky cradles. I'm really excited to see what all comes out of there. So, we don't know what sort of animals besides this Protosuchus are in there. There is a possibility that we have new species. There's a possibility that we have animals that haven't been documented from this area or this time before. That's really exciting. That's going to take several months to get a full accounting of what is in these big chunks of rock that we brought back to the museum.

CURWOOD: Rob Gay is a paleontologist who works with the Museums of Western Colorado. Rob, thanks so much for taking the time today.

GAY: Thank you so much for having me on.