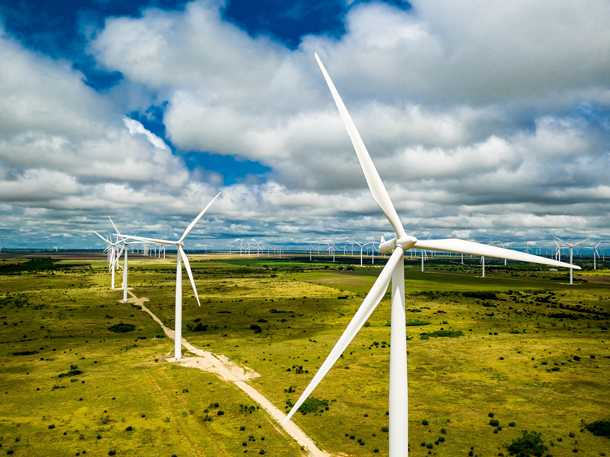 Billions of dollars in additional funds for scientific research, including renewable energy research, earth systems observations and sea level monitoring were tucked inside the $1.3 trillion omnibus spending measure passed March 23, won by a center-right Republican and center-left Democratic coalition that also defeated efforts to gut funding for the EPA. And most of some 80 anti-environmental riders were dropped before the final vote. But as Washington Reporter Marianne Lavelle of InsideClimate News tells host Steve Curwood, the Trump Administration is still pushing for environmental rollbacks and environmental advocates are staying vigilant.

CURWOOD From PRI, and the Jennifer and Ted Stanley Studios at the University of Massachusetts, Boston, this is Living on Earth. I’m Steve Curwood. Folks at agencies from the EPA to NOAA to the eight regional climate information centers of the US Geological Survey, are now breathing sighs of relief as they will keep their federal funding or even see increases, thanks to a bipartisan federal spending measure enacted March 23rd. A coalition of center-right Republicans and center-left Democrats voted to boost a cap on defense and domestic spending, making room for more funding for everything from fighter planes to renewable energy research. The vote also stripped most of the anti-environmental measures known as riders. Here to tell us more is Marianne Lavelle, Washington reporter for InsideClimate News. Marianne, welcome back to Living on Earth!

LAVELLE: Glad to be here, Steve.

CURWOOD: So, there's a lot of good news here in this budget for people concerned about science, the environment, stuff like climate change. Let's talk about some of these. What about the Geological Survey's climate centers? How did they do?

LAVELLE: Right, well the Trump administration had wanted to get rid of about half of them, and I think they're all staying. That's really important because the USGS has done some of the really important study on sea level rise and its impact on the coasts, so that was important in a lot of states.

CURWOOD: Now, before all of this, the EPA was going to walk the plank almost to oblivion. What happened finally?

LAVELLE: Right, right. They were looking at a 30 percent cut in their budget, and that would take them back to, oh, about the Reagan administration level of cutting. They already have lost 700 people through buyouts, and they were looking at losing 2,000 more. Well, Congress said no to that and kept them at their current budget. So, they have fewer employees than they did at the beginning of the Trump administration, but it could have been a lot worse. CURWOOD: And talk to me about the Department of Energy and how they fared in this - in this financial arrangement?

LAVELLE: Yes, things like the Office of Renewable Energy and Energy Efficiency. That office was going to see a 70 percent cut under the Trump plan, and actually it gets an increase – not just a small increase, a pretty large one – nearly a 13 percent increase. And this really is testimony to how important clean energy has become in red states. Texas now is the number one wind energy state, Iowa, very big wind energy state, Kansas, even Oklahoma, is looking forward to expanding wind energy and bringing the tech industry there because the tech industry wants to have renewable energy.

So, all of these states, whether you're a red state or a blue state, new technologies and wind and solar energy has become an important business. In particular, look at the program called ARPA-E, Advanced Research Programs Agency-Energy. The Defense Department has a similar program but it's to really seed early stage development in clean energy, and there are programs all over the country on this, and the Trump administration wanted to eliminate that program. They said the private sector should be doing this sort of research. Well, of course, the private sector does not invest in early-state research, and Congress felt this was a really important thing to continue to invest in. They increased that budget 15 percent. And the thing to remember is that DARPA, the Defense Advanced Research Projects Agency, that's where the Internet really was born. So, the government has a pretty good track record of results for this early stage research.

CURWOOD: Now, what about NOAA? There's a fair amount of climate research that's been done in the National Oceanic and Atmospheric Administration. I guess they got a fair amount of an increase, huh? 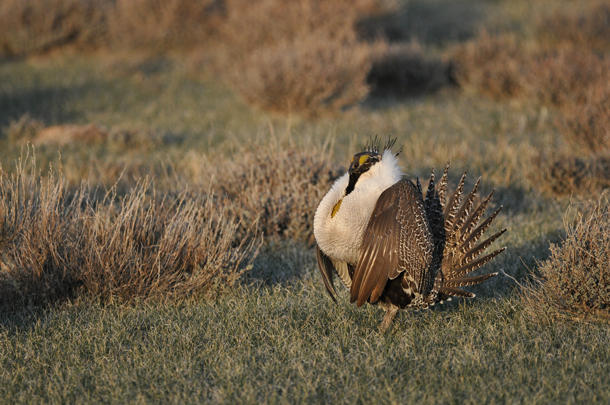 Some Republican lawmakers tried to include riders blocking enforcement of the Endangered Species Act. One rider sought to block federal protection of the Greater Sage-Grouse, a species that’s threatened by oil and gas development in its sagebrush habitat. (Photo: Jeannie Stafford/USFWS, Flickr CC BY 2.0)

LAVELLE: Right. Again NOAA was looking at a one billion dollar cut and NOAA's budget also increased. NOAA, it's hard to overstate how important they are to these coastal communities in the research they do. For example, the sea grants that were going to be eliminated by the White House. Well, they're very important for the future of fisheries on the Atlantic Coast, the Gulf Coast. They have even been doing research into how to predict heat waves and such in the ocean just as they predict weather, so that fisheries can prepare for the changes that they're seeing on a much more frequent basis now that we are facing climate change and what Congress did was NOAA shows how important this is to their constituents, whether Republican or Democrat.

CURWOOD: Now, there's a flip side to the spending bill. It took out all kinds of what are known as "riders" that a number of folks considered to be anti-environmental. Talk to me about some of those that didn't make it in.

LAVELLE: Right, in the drafts of the budget there were about 80 anti-environmental riders as well as some riders that would have very radically changed campaign finance law, which also was very troubling to environmental advocates. Most of those riders were eliminated by the GOP leaders. They really needed to do that in order to get the Democratic votes that they needed to pass this budget.

CURWOOD: Talk to me about some of those riders that got knocked out.

LAVELLE: There were many endangered species riders. One of them would have prevented regulation around the Sage-grouse, which is a big showy bird in the west, but the important thing about that bird is it's kind of a marker for the whole sagebrush ecosystem and about a hundred other species, and the Obama administration had done kind of this middle of the road thing with the Sage-Grouse. They came up with this – they called the Cooperative Conservation Plan. They felt that with the states involved, that they could work out a deal to protect the sagebrush and allow oil and gas development to continue. Well, the oil and gas industry very much did not want any of that regulation, and that is what the rider in Congress would have done. That rider was eliminated. But, it's important to know that the Trump administration is going forward with trying to undo the deal that Obama cut on the Sage-Grouse. That's happening with a lot of these riders. 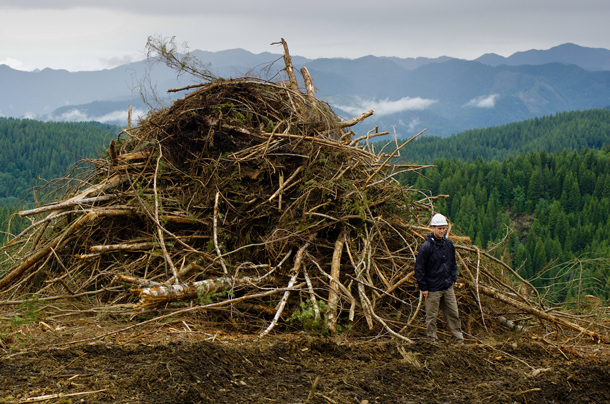 Proponents of biomass energy say that forest regrowth will theoretically suck carbon dioxide back out of the atmosphere after trees are burned for energy, making biomass energy carbon-neutral. But forest experts point out that it will take decades or even a century to reach carbon neutrality. (Photo: Oregon Department of Forestry, Flickr CC BY 2.0)

CURWOOD: Talk to me about the methane rule rider, which I guess was ultimately rejected by Congress. This was a pretty big deal, right?

LAVELLE: It's a really big deal. Next to the Clean Power Plan, it's one of the biggest steps that the Obama administration took on climate change was several rules really to do with methane. And the Obama administration looked at this as an easy thing to do on climate because all you're really doing is preventing leaks in the pipes and in the infrastructure, just some new monitoring requirements, some better wrenches and pipes. Well, so one of the first things that the Trump administration set out to do was to get rid of methane regulations. They have tried to do that in many different ways. They've been knocked back by the courts. They were unable to get the votes in the Senate last May to do it. And this budget bill showed they were not able to get it through as a add-on to the budget as well. Now, Secretary of Interior Ryan Zinke is continuing his effort to go through the whole rulemaking process to get rid of those methane regulations. So, that is still – that’s the thing about this victory on the riders for the environmentalists. Although they have won this battle, the war is not over because in almost every case the Trump administration is going forward on a whole variety of fronts to undo these regulations.

CURWOOD: Now, let's talk about one of the few anti-environmental provisions that did make it in this spending bill. I understand one of them encourages burning biomass, typically small, scraggly trees for electric generation. Now, what's wrong with that from an environmental perspective?

LAVELLE: Right. Well there are two concerns that environmentalists have. One, is the pollution – particularly particulate pollution from that burning of biomass if it is not properly controlled. The other is that the advantages that this bill gives to biomass could make wind energy and solar energy disadvantaged in the market because it will be cheaper in some places to just burn biomass, and it won't be as beneficial for the environment, it won't be as beneficial for climate because burning wood and biomass puts carbon into the atmosphere. So, that is kind of the two-fold environmental concern about that. 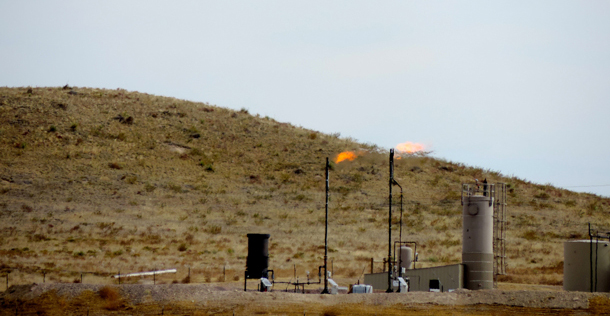 Methane flaring wastes precious natural gas resources, and leaked methane is a major contributor to climate change, the Obama Administration said when it created a rule governing methane leaks and flaring on public lands. A rider that did not survive final negotiations for the FY 2018 federal appropriations bill would have rolled back the rule. (Photo: WildEarth Guardians, Flickr CC BY-NC-ND 2.0)

CURWOOD: But the argument was made, “Look, all right so you burn the tree and the carbon goes into the atmosphere but then more trees grow, so it comes back.”

LAVELLE: So it's a renewable resource. Unfortunately, the way that it is practiced is that we burn it much more quickly than we grow the trees to replace that biomass.

CURWOOD: So, what's the mood in the environmental lobby now and in Washington after this budget has passed?

LAVELLE: Eternal vigilance seems to be the mood in the environmental community. I would say there was a brief sigh of relief followed by more determination to keep up with what the Trump administration is doing, especially when it comes to climate change.

CURWOOD: Marianne Lavelle writes politics for InsideClimate News in the Washington area. Marianne, thanks so much for taking the time with us today.

LAVELLE: Thanks so much for having me, Steve.

About the ARPA-E program