Note on Emerging Science: Fear Itself 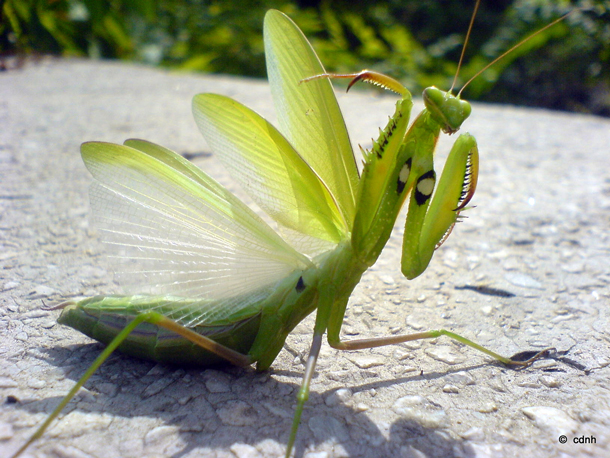 Predators like this praying mantis can be threats to others without directly harming the prey – they just need to be scary. (Photo: cdnh, Flickr CC-BY-SA 2.0)

The mere whiff of a praying mantis can be enough to scare fruit flies away from food and sex. As Noble Ingram reports in this week’s Note on Emerging Science, the biological drive to give into fear can be just as disastrous as a genuine threat.

CURWOOD: In a minute, how cutting pollution from a coal plant can actually change DNA in babies – but first this note on emerging science from Noble Ingram.

INGRAM: For President Franklin Delano Roosevelt, in 1933, the hardscrabble path out of the Great Depression had but one roadblock.

ROOSEVELT: Let me assert my firm belief that the only thing we have to fear is … fear itself!

INGRAM: Today, scientists from McGill University and the University of Guelph in Canada have found that what was true 85 years ago may also be true today. The researchers discovered that indications of a lurking predator can cause some fruit flies to abandon behaviors critical to their survival. FDR had a point; fear itself can be deadly.

The team exposed small groups of the tiny insects to the scent of a hungry praying mantis. Alerted to nearby danger, the flies avoided activities like eating and reproducing, which would leave them vulnerable. After the initial puff of mantid perfume, the risk of a total die-off increased seven-fold.

As it turns out, the size of these isolated populations played a critical role. Fruit flies compete for resources and in large numbers, suffer from excess competition. But the team found that smaller, otherwise-unstressed populations actually suffered more from fear than larger groups. When all other environmental factors encouraged these flies to eat and breed freely, the creeping sense of danger interfered.

This curious biological phenomenon is known as the Allee effect and it poses serious problems for struggling species, especially social animals like meerkats or starlings. As the saying goes, there’s safety in numbers, and it’s possible that for many prey animals, the fear that comes with losing your network is just as dangerous as the reality of a predator. Having no one to keep a lookout -- even if nothing is really there -- can spell disaster.

So in times of uncertainty, remember what FDR said, and keep your friends close -- even if only for the peace of mind.


The original study in Proceedings of the Royal Society B: Biological Sciences

ScienceDaily: “How fear alone can cause animal extinction”