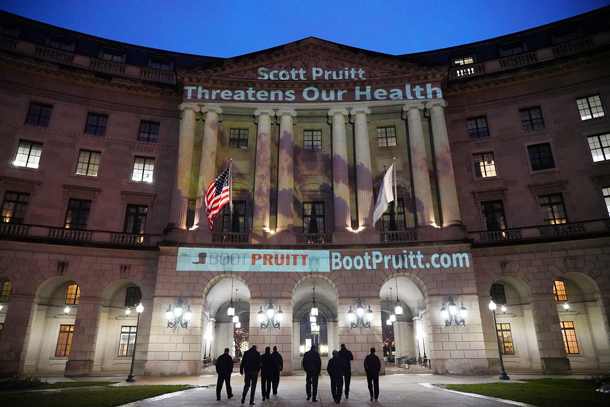 EPA Administrator Scott Pruitt is caught in a crossfire of criticism from people who question his ethics, extravagant travel, lobbyist-related housing deals and worker salary practices as well as those who see his work to roll back regulations aimed at controlling global warming and other pollution emissions as the wrong direction for America. Key organizations, including the League of Conservation Voters (LCV), have launched a campaign to “Boot Pruitt.” LCV President Gene Karpinski shares with host Steve Curwood his concerns about Administrator Pruitt’s close ties with industry and his efforts to rip up key Obama policies such as the Clean Power Plan and fuel economy standards.

It’s fair to say Scott Pruitt is the most controversial EPA Administrator since Anne Gorsuch Buford was hit with contempt of Congress back during the Superfund scandal in 1983 and forced to resign during the first two years of the Reagan Administration. Like Scott Pruitt she tried to cut 30 percent of the EPA budget, and was seen as too cozy with business interests she was sworn to regulate. But Scott Pruitt has arguably angered even more of the Washington establishment left and right, with what might be seen as personal veniality combined with an all-out assault on many environmental regulations. And most famously he persuaded President Trump to pull out of the Paris climate agreement, isolating America from every other nation on Earth.

Republicans as well as Democrats in Congress have demanded his resignation, along with eco groups that say it’s time to “Boot Pruitt.” Here to discuss is Gene Karpinski, President of the League of Conservation Voters. Gene, welcome back to Living on Earth!

KARPINSKI: Great to be with you, Steve. Thanks.

CURWOOD: I understand that there are both policy and ethical concerns you have with Scott Pruitt. First, what concerns you most about the EPA policy changes he's led in his first year. Maybe you want to start with climate? 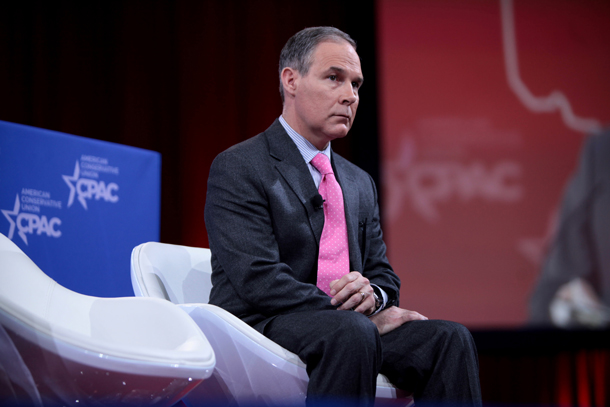 EPA Administrator Scott Pruitt is under public scrutiny for numerous potential ethical breaches, including his below-market-rate rental of a bedroom in a condo owned by the wife of a top energy lobbyist. (Photo: Gage Skidmore, Flickr CC BY-SA 2.0)

CURWOOD: What about his record regarding toxic chemicals, Gene?

KARPINSKI: So, you know, Congress to their credit passed a very bipartisan reform of TOSCA, which is well, well, well overdue, but unfortunately it seems like Mr. Pruitt is ignoring the implementation of law, and even more outrageously, the president asked for a 31 percent cut in the EPA budget and Pruitt went along with that. Now, the good news is that Congress said no way, no how. In fact, they kept the EPA budget stable at least. It should be rising, but at least it kept it stable. But the president and the administrator of the EPA want to cut the budget.

CURWOOD: Now, his previous job was as Attorney General of the state of Oklahoma where at one point, he said it was his job to sue the EPA. What do you make of his record, his selection, and the results of that selection?

KARPINSKI: Well, you're absolutely right. In fact, he brought 13 or 14 lawsuits. The good news is he lost basically every one of those and he was unsuccessful as an attorney general because the previous EPA administrators Lisa Jackson and Gina McCarthy were following the law. And he basically lost in court every time. Unfortunately, though, with the new president, the president wants him do the wishes of the people who helped put him in office, which is big oil, dirty coal companies, and Scott Pruitt was their guy.

CURWOOD: Now, the "Boot Pruitt" campaign is also pointing to you have said are serious ethical red flags with Mr. Pruitt. Tell me about those.

KARPINSKI: Sure, he's clearly ripping off taxpayers as well. So, we saw things about him flying first class for seemingly no real good reason. We saw him getting a sweetheart deal on condo rent in DC. No one else would get that kind of deal. It just so happened that the people renting him also were doing business at the EPA and they had clients before the EPA. That was outrageous. Even just recently in the last couple of days, we saw that he's given special raises to some of his most favorite employees that he brought with him from Oklahoma. Finding loopholes in the way you're able to get raises and giving tens of thousand dollars to people who are some his best buddies in the EPA who are doing the bidding of the polluters.

CURWOOD: You don't like his ethics, you don't like what he's doing. What, if any, laws do you allege that Mr. Pruitt has violated?

KARPINSKI: So, I think...look, clearly in terms of his policy proposals I think we're going to find when we go to court, he's abused the process as he's tried to redo the Clean Power Plan, redo the clean water rule, redo the clean car standards that he's proposing right now. I think he's going to be stopped in court. There were years spent developing the Clean Power Plan, the clean water rule, the clean car standards. You have to have a process, you have public participation and you take the science. You follow the science, and he seems to be just skirting the law and subverting the process just to do the bidding of the polluters. 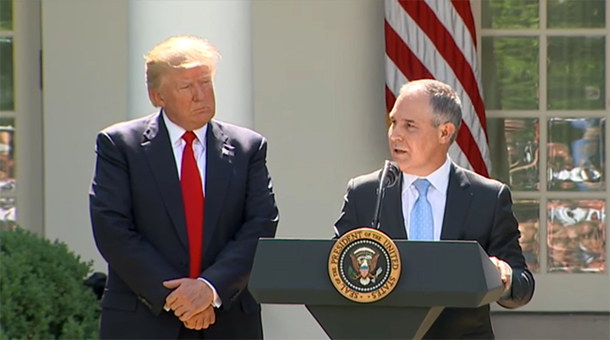 EPA Administrator Scott Pruitt and President Donald Trump on the day they announced the U.S. would pull out of the Paris Agreement, June 1st, 2017. (Photo: screenshot of PBS NewsHour stream)

CURWOOD: Hey, Gene, you and I are both old enough to remember Ann Gorsuch, who came in trying to cut 30 percent of the EPA budget when President Reagan first came to power. What - she hired industry people to regulate areas related to their businesses, and she was forced to resign before her second year on the job was up. I believe she was cited for contempt of Congress over a records request relating to a Superfund scandal. See any parallels here?

KARPINSKI: Well, you know, prior to Pruitt, Ann Gorsuch was definitely the worst EPA administrator. In fact, if you look at the first President Bush administrator Bill O'Reilly, he understood the environmental mission. Look, the second President Bush, Christine Todd Whitman, his first EPA administrator, understood the mission of the EPA. So, Gorsuch was a glaring exception to both Democrats and Republicans appointing people to understand the mission. But Scott Pruitt is just definitely the worst. That's why he's got to.

CURWOOD: You know, your campaign is running an ad on Fox and Friends and Morning Joe, both shows, by the way, that President Trump is known to regularly tune into, and I'd like to play the audio now from that ad.

PRUITT: I’d like to say something. I think he’s an empty vessel when it comes to things like the constitutional rule of law.

NARRATOR: That's Scott Pruitt, Donald Trump's head of the EPA talking about Donald Trump. The same Scott Pruitt under investigation for wasting more than $100,000 taxpayer dollars on first class flights, and who's failed to enforce laws that protect Americans from arsenic and mercury. Scott Pruitt, playing taxpayers and President Trump and dangerous to your family's health.

CURWOOD: So, Gene, let's say that Scott Pruitt does get the boot, as you would say. Who would replace him, do you think?

KARPINSKI: Well, that's… one step at a time here, I'll say. We just launched this campaign. It's incredibly important, so let's see how this plays out. I wouldn't want to speculate but we'd like to think that we could find someone who actually understands and agrees that mission of the EPA, which is to protect public health, keep our air and water clean, rather than someone who spent a lot of his career suing EPA for doing its job. 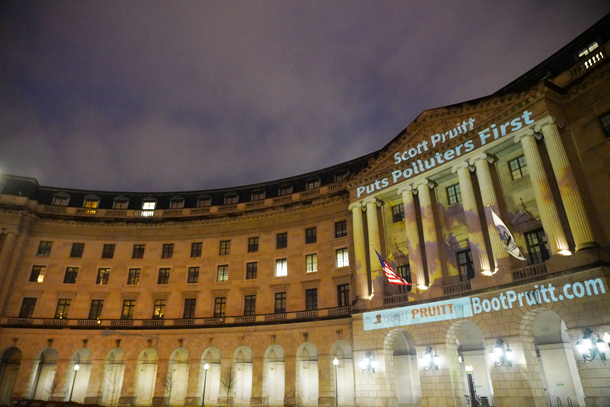 In addition to the League of Conservation Voters, the Boot Pruitt campaign is being led by several other organizations, including the Sierra Club, Defend Our Future, Earthjustice, Hip Hop Caucus, #GreenForAll, GreenLatinos and NRDC. (Photo: Liz Gorman / Bellvisuals.com)

CURWOOD: Gene Karpinski is President of the League of Conservation Voters. Thanks so much for taking the time today.

KARPINSKI: Great to talk to you again. Thanks.

CURWOOD: The press office at the EPA declined repeated requests via telephone and email to comment on this story.

The New York Times: “Pruitt Had a $50-a-Day Condo Linked to Lobbyists. Their Client’s Project Got Approved.”

The Atlantic: “Scott Pruitt Bypassed the White House to Give Big Raises to Favorite Aides”

The New Republic: “If Scott Pruitt gets fired, he might be replaced by a former coal lobbyist.”