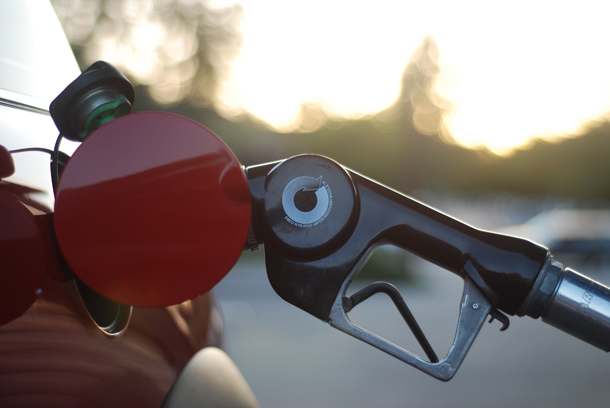 Cheap gas prices may be contributing to the market for SUVS and other large vehicles with poor fuel economy. (Photo: gosheshe, Flickr CC BY 2.0)

EPA administrator Scott Pruitt has announced that the agency will start the process of scrapping Obama-era auto emissions standards negotiated with the automakers, a move that if completed, would double allowable vehicle pollution in 2025 compared to existing rules. The decision also sets the stage for a possible legal battle with California, which wants to keep its more stringent standards. Host Steve Curwood spoke with Dan Becker of the Safe Climate Campaign.

CURWOOD: It’s Living on Earth, I’m Steve Curwood. As Gene Karpinski mentioned earlier in this program, EPA administrator Pruitt recently called for the rollback of rules that now require automakers to cut emissions of new cars and light trucks in half by 2025. Here’s what he said at a news conference.

CURWOOD: But twentyfive governors and 50 mayors have criticized Administrator Pruitt’s plans. Among those most concerned are Californians, as Mr. Pruitt is also looking to rescind a federal waiver that allows the Golden State to impose tougher vehicle pollution standards than the federal government. Dan Becker, Director of the Safe Climate Campaign is a vocal opponent of weakening the vehicle rules and he joins us now. Welcome to Living on Earth, Dan!

BECKER: Thanks a lot, Steve. Great to be here.

CURWOOD: So, what effectively has happened here? What has the Trump administration done with this announcement?

BECKER: Well, the Trump administration is giving a huge gift to polluters by rolling back the biggest single step any nation has ever taken to combat global warming and save oil, and it's really a cynical effort to make America polluted again.

CURWOOD: Now, one of the rationales that was offered is that, “Hey, we can do this because the price of oil, price of gasoline is cheap”. What do you think of that?

BECKER: The price of gasoline is certainly cheaper than it was when the rules were established, but there are a lot of other reasons why these rules make sense beyond just saving consumers money at the pump, and even at these lower gas prices these standards will still save the average consumer $6,000 dollars at the pump over the life of the vehicle and that's net of the technology that saves the gas, and if you add it all up across the country it's a trillion dollars in savings over the life of this program. Not only that, in the long term, most people understand that gas prices won't stay low forever. 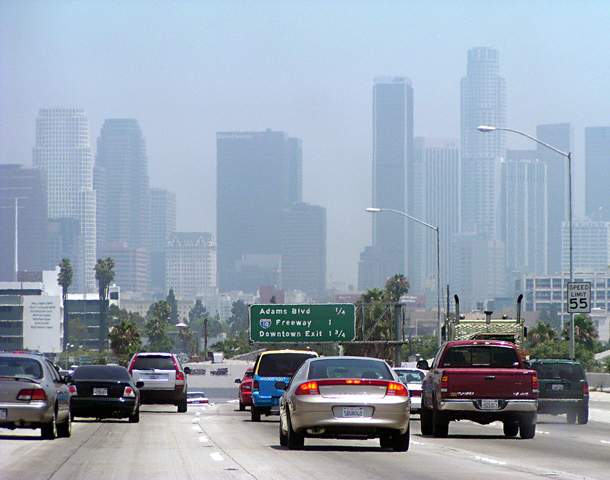 Weakening the fuel efficiency standards could mean urban areas like Los Angeles, California could have as much as double the tailpipe emissions compared to if the Obama standards remain in place. (Photo: Jay Peeples, Flickr CC BY-NC 2.0)

CURWOOD: So, if you say that the Obama era fuel efficiency standards save consumers some trillion dollars, if they don't get to save that money, if the rule gets rolled back, where does that money go? The pocket of the oil companies?

BECKER: Of course, if you're buying gasoline that you don't otherwise need to buy, you're enriching the Exxons of the world and the countries from which Exxon gets its oil, countries that America has conflicts with whether they're in the Middle East, or South America or elsewhere.

CURWOOD: So, I'm scratching my head here trying to figure out why many of the automobile companies that so painstakingly negotiated the original deal with former President Obama have now decided to rally around its demise.

BECKER: Well, they not only negotiated it and they stood with him at a press event to applaud it, they also signed letters of commitment saying that they would not challenge these standards unless certain things happened and those things didn't happen. So, what the auto industry did was they recognized that the Trump administration was a key opportunity to roll back these standards. They never liked them, but they were willing to live with them because, partly in exchange for agreeing to the standards, they got an $85 billion dollar bailout, but they weren't terribly grateful for that as they're showing today in that they want to now produce more gas guzzlers that keep America addicted to oil. So, poor recompense for a bailout, but they couldn't resist the opportunity to get a short-term boost in their profits. For example, GM has an Escalade, the Cadillac Escalade, which is a Cadillac pickup truck. It sells for $71,000. They make $35,000 pure profit on that, according to The Detroit News. And the Ford Motor Company sells the F150 pickup truck, they sell three-quarters of a million every year, so they advertise the hell out of it because they make between $9,000 and $15,000 on each one, pure profit.

CURWOOD: So, Dan, talk to me about the waiver that California has with regards to vehicle emissions. What is it exactly and how would it be affected by this move by the Pruitt EPA? 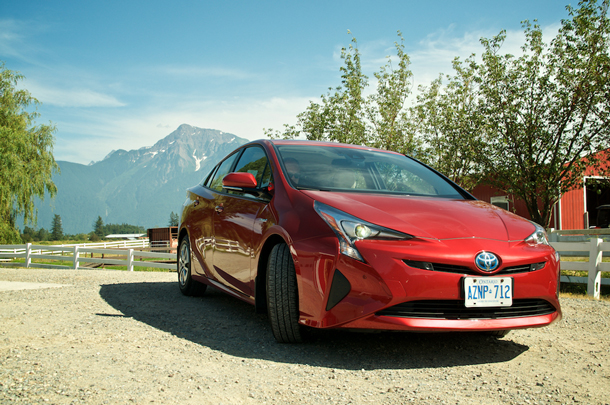 BECKER: The waiver is very important. It is a result of a provision in the Clean Air Act of 1970 that recognized that California both had worse air pollution than the rest of the country and had already taken preliminary steps to address it, and those steps were stronger than what the federal government was going to take in the Clean Air Act. So, they said California and other states that choose to follow California's rules can have tougher rules than the federal government does as long as they get a waiver from EPA. Now, the Trump administration comes along and says, we want to weaken the federal agreement.

So, the challenge now is whether the states buckle, which I don't think they will do, and agree to roll their standards back to whatever level Trump sets, or whether the Trump administration allows the states to continue to enforce the existing standards as they had agreed. If that happens, then the auto companies have to decide whether to make all clean cars or send the clean cars to the states that require cleaner cars and send the dirty cars to Oklahoma and the other states in between.

CURWOOD: And there's a third alternative, that is the states may say, “Hey we want to stick with the Obama era rules and Trump Administration says “no, no, no, no”. It sounds like that's a ticket to court?

BECKER: The Trump administration could try to revoke the waiver, but there's no provision in the Clean Air Act that allows them to do that, and there's no precedent for ever having tried it before. So, the likelihood that they would win in court is not great.

CURWOOD: So, what do you see happening to the exporting of cars made in the United States? 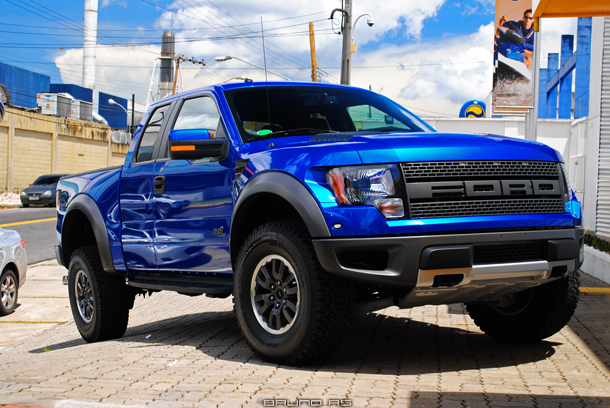 BECKER: Well, the US auto makers obviously dominate the American car market although not nearly as much as they did before the Japanese and other foreign automakers took away market share by making better cars. But the American manufacturers want to make big inroads in China which is growing rapidly. The Chinese generally don't want gas guzzlers although the American automakers are trying to advertise them in ways to make them the sexy new vehicle for the modern Chinese family. But the Chinese government wants to establish a major auto industry that exports to the United States as well as other countries, and last year the Chinese government established a requirement that in 2025, 20 percent of vehicles sold in China must be electric vehicles.

The Chinese recognize, as many of the other Asian and European manufacturers do, that there's an enormous market for cleaner vehicles that guzzle less fuel and they want to fill that need. The American manufacturers would much rather make gas guzzling SUVs and pickups because they make more money on each one, and so the short term is that the Americans may have trouble selling their gas guzzlers in foreign markets. The longer term is that we may go back to 2008 when Americans also don't want to buy the gas guzzling SUVs and pickups and the American manufacturers face a real crisis. 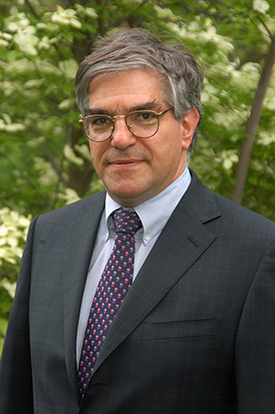 Dan Becker is the founder and director of the Safe Climate Campaign, based in Washington, D.C. (Photo: Dan Becker)

CURWOOD: How important were the Obama era fuel efficiency standards to meeting our commitments in Paris?

BECKER: Very important. The fuel economy and emission standards that Mr. Trump wants to roll back are the biggest single step any nation has ever taken to cut global warming pollution and save oil. They would save 12 billion barrels of oil and six million tons of CO2 over their lifetime so those savings represent the largest chunk of emissions reductions that any country offered up at the Paris Climate Agreement. No other country is going to come close, and if we don't come close either it's pretty likely the Paris Agreement will fail.

CURWOOD: So, Dan, some 50 mayors and 25 states have signed a letter saying that this is really a bad thing, that rolling back these fuel efficiency standards is not helpful and that's more states than who are actually part of the California compact. I think there are 12, 13 states in that.

BECKER: Absolutely, more states and more mayors recognize that air pollution is important and that they don't want more of it, so they've signed on to urge the administration away from these rollbacks. That's very encouraging. It may also hint that more states want to join the dozen or so that follow California's rules.

CURWOOD: So, what's the process here and what are the prospects of reversing this course of action?

BECKER: There's a long process that Mr. Pruitt and Trump have to undertake in order to roll back these standards. They've only just begun that process. It will depend in part on whether their proposals are reasonable or unreasonable in the eyes of a court, and if the court deems them unreasonable they'll be tossed out and the existing rules will continue. If the Trump administration and the automakers go to war with California and the States, it will be messy, it will take a long time it will end up in expensive and extensive litigation and although I think we’ll win at the end and prevail with cleaner vehicles and a cleaner atmosphere, the next administration will have to clean up this mess and will have to decide for not just the cars being made through 2025, which are what are at risk here, but also the vehicles that will be made beyond 2025, and the auto companies know it and Mr. Trump may learn it, in this process the states bat last.

CURWOOD: Dan Becker is the director and founder of the safe climate campaign. Dan, thanks so much for taking the time with us today.

BECKER: Thanks so much, Steve. I really enjoyed it.