BirdNote®: Walk Down an Arroyo 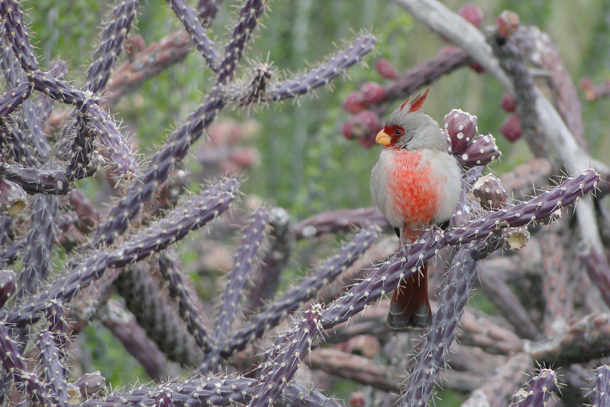 A Pyrrhuloxia, feathered in grey with red highlights, sits atop a cactus. (Photo: Billy Liar, CC)

Dry, sandy creek beds, called arroyos, are a refuge for an abundance of birds in the Southwest. In today’s BirdNote®,Mary McCann takes a tuneful stroll through this desert habitat.

CURWOOD: Let’s head to the dry sunny southwest of the US now. As Mary McCann explains in today’s BirdNote, a warm morning there brings out an abundance of eager songsters.

MCCANN: Have you ever heard a Roadrunner sing? That’s the maker of this cooing sound.

MCCANN: Want to hear more sounds of the desert Southwest?

[Someone walking along a sandy path]

MCCANN: Come along, as we walk along an arroyo, a dry, sandy creek bed. Arroyo means “stream” in Spanish. With mesquite, yucca, and cactus along their edges, arroyos in the Southwest fill with water only a few times a year, mostly during the heavy rains of late summer. Despite the arroyo’s lack of water at the moment, there’s a remarkable diversity of wildlife here. 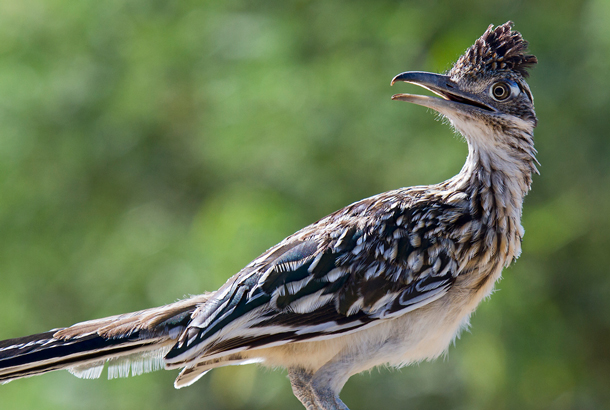 The Greater Roadrunner is just one of many fascinating birds found in the deserts of the Southwestern United States. (Photo: SearchNet Media, CC)

MCCANN: And there’s a Pyrrhuloxia singing from atop a yucca.

MCCANN: The Pyrrhuloxia looks a lot like a cardinal, except it’s feathered in silvery gray, with magenta highlights.

MCCANN: Birds here are most active in the morning, except those that are nighttime specialists.

MCCANN: Just after sunset, we’d hear the drawn-out trill of a Lesser Nighthawk.

MCCANN: And a cousin of the nighthawk, a Buff-collared Nightjar, might begin to call.

[MUSIC: R. Carlos Nakai, “Song for the Morning Star” on Canyon Trilogy, Canyon Records]
CURWOOD: Saunter on over to our website, loe dot org, for photos and more.

Read more about the Pyrrhuloxia at All About Birds

Read more about the Greater Roadrunner at All About Birds

Read more about the Lesser Nighthawk in the Audubon Field Guide