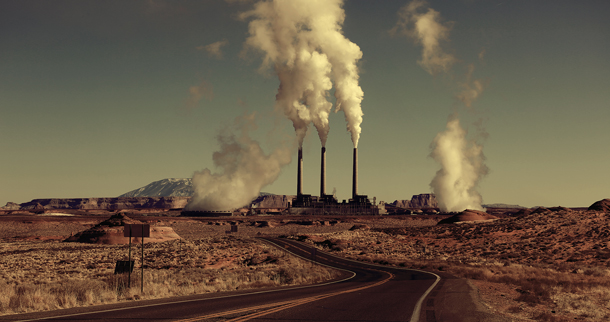 The air pollutants allowed to increase following the revocation of the “Once In, Always In” policy include toxins such as lead, mercury, and cadmium. (Photo: Eflon, Flickr CC BY 2.0)

In January 2018, the EPA revoked the Clean Air Act policy known as “Once In, Always In." This provision ensured that major sources of Hazardous Air Pollutants installed the most efficient control technologies and kept them running. This rollback by the Pruitt-led EPA allows these facilities to relax anti-pollution controls, as long as their emissions stay below “major source” limits. Earthjustice Vice President of Litigation, Patrice Simms, talks with host Steve Curwood about a lawsuit launched by environmental groups that seeks to put the tougher controls back in place.

CURWOOD: It’s Living on Earth, I’m Steve Curwood. In January, the EPA announced it was withdrawing the 23-year-old pollution control policy known as “Once In, Always In.” The Clean Air Act requires facilities that emit so much hazardous air pollutants that they are deemed to be major sources to restrict their emissions using the most effective technologies. And even when equipment causes emissions fall below the level to be rated a major source, those plants were still required to keep using the strongest and best methods. Under Scott Pruitt, the EPA has rolled back this rule and now allows these facilities to relax controls as long as they stay below the major emitter threshold. Seven environmental groups and the State of California say the rollback opens the door to huge increases in the release of dangerous air pollutants, and have sued the EPA, crying foul. Patrice Simms, Vice President of Litigation at Earthjustice, which is leading the green groups lawsuit joins us – welcome to Living on Earth!

SIMMS: Oh Steve, thank you very much for having me.

CURWOOD: Hey, give me a little bit of the history of the Once In, Always In, policy. When did it begin and what exactly did it provide in terms of protection from pollutants?

SIMMS: The Once In, Always In, policy is part of a regulatory program under the Clean Air Act, and that program deals with the control of hazardous air pollutants. Not the things that we often think about like smog, the stuff that you see hanging over a city, but rather these are highly toxic air pollutants, things that cause cancer and birth defects and neurological problems, lead and mercury and cadmium. So, the Once In, Always In, policy was a part of the suite of amendments to the Clean Air Act. These provisions said facilities have to get the greatest degree of reduction achievable, essentially saying everyone, if there's technology out there that controls these pollutants, everyone should have emissions that are consistent with the use of that technology. 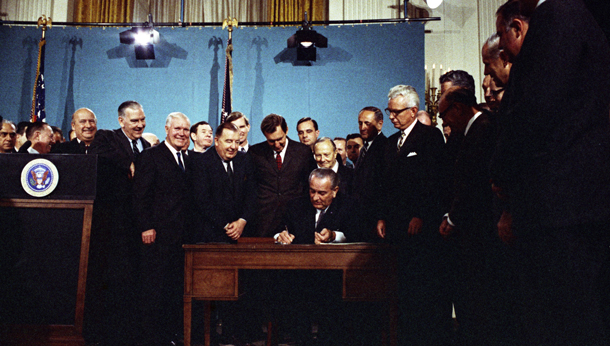 Enforcement of the Clean Air Act, which President Lyndon B. Johnson signed it into law in 1963, has included the “Once In, Always In” policy since 1995. (Photo: Wikimedia Commons, Public Domain)

CURWOOD: Well, that sounds reasonable. So, what is the problem now with this approach?

SIMMS: Entirely reasonable, right, and not just reasonable but super important because these pollutants as I said are pollutants that cause sort of catastrophic health effects. So, what's this Once In, Always In, policy? Well, one of the things that the statute did is it said that these standards apply to what are called major sources. The policy that has always been in place and been entirely reasonable is just because you've gone below the ten-ton threshold, which would identify you as a major source, doesn't mean that you stop being a major source. You continue to be a major source and have to continue using those control technologies.

CURWOOD: But now the Trump administration is saying, “Well, their emissions are really low now, so they're not major sources so they could actually raise their emissions”.

SIMMS: As long as those emissions don't go into major source territory again.

CURWOOD: Well, I can imagine the companies are saying, “Well, wait a second. We've done what we're supposed to do so we're not major emitters anymore”.

SIMMS: Well, and this is the whole point of Once In, Always In. The idea is once you are in, you are in, and you must continue to meet the criteria of the statute to get what is in the language of the statute, "the greatest degree of reductions achievable".

CURWOOD: So, how successful has this policy been in cleaning up the air during its time in place?

SIMMS: It's been quite successful. I would say they've achieved quite dramatic reductions in hazardous air pollutants across many different industries. 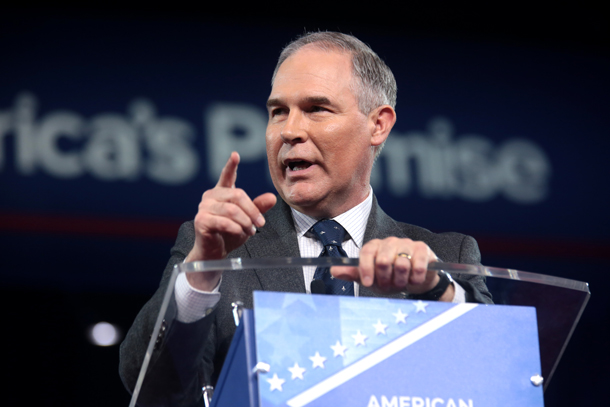 EPA Administrator Scott Pruitt has received criticism from both Democratic and Republican lawmakers who question his ethics and the many rollbacks that have happened during his tenure. (Photo: Gage Skidmore, Flickr CC BY-SA 2.0)

CURWOOD Now, let me see if I have this right. Back in the day, industry said don't actually set a limit. Just require us to use the best available technology. But, now this is being turned right around to saying, well, now that we've reduced these emissions, we should be able to go back up to what's just under the level that requires being listed as a major source.

SIMMS: Yeah, it's a baffling sort of logic here that if the program is successful, if the control technology really works, then you don't have to use it.

CURWOOD: So, I'm guessing the motivation for industry asking the Trump administration to make this change is money.

SIMMS: Absolutely. I think we have seen that this request has been made to EPA over a period of many, many years, and it is primarily driven by a desire not to have to incur the costs associated with cleaning up their discharges.

CURWOOD: Now, as I understand it, one of the organizations that has joined in your suit here has done a study. Talk to me about what they found in their study.

SIMMS: Just looking at a handful of facilities, EIP, Environmental Integrity Project, was able to determine what is the difference between, for some of these facilities, what they are achieving and what would be allowed if all they had to meet was the limit to remain a non-major source. And the - the results were pretty astounding. In many cases, what would be allowed is an increase of four or six or eight or ten times the pollution that's currently permissible, and in some instances, even much more than that.

CURWOOD: And if this were to proceed, what communities would be most affected?

CURWOOD: What is the argument that the Environmental Protection Agency offers as to why they decided to revoke this Once In, Always In, policy?

SIMMS: The only rationale that the agency gives for this decision is a legal one, is a conclusion that the Once In, Always In policy is inconsistent with the statute. 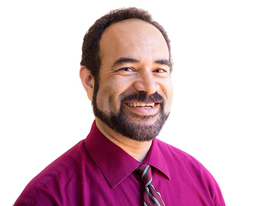 Patrice Simms is the Vice President of Litigation at Earthjustice, based out of Washington, D.C. (Photo: Earthjustice)

CURWOOD: So, is this already in effect?

SIMMS: The policy is in effect. From the agency's perspective, all they had to do was announce that this policy was being reversed and that was the end of the story.

CURWOOD: So, in cases, of course, of the Clean Air Act, you go straight to the Court of Appeals for the District of Columbia Circuit and what are you asking that court exactly to do?

CURWOOD: So, in your view, what's illegal about this?

SIMMS: Well, it's flawed both procedurally -- there wasn't any kind of notice and comment process, nor any kind of technical or economic analysis underlying the decision -- and it's substantively flawed. It allows for an increase in emissions that is contrary to what the statute requires the agency to do and requires in terms of regulation of air pollutants.

CURWOOD: I understand there are no hard numbers out there, but how many Americans do you suspect are being put at risk of increased pollution?

CURWOOD: Patrice Simms is the Vice President of Litigation at EarthJustice in Washington. Thank you so much for taking the time with us today.

SIMMS: Well, thank you so much for having me, it was a pleasure.

CURWOOD: Bill Wehrum, who leads the EPA Office of Air and Radiation, defended the rollback in a written statement. “It will reduce regulatory burden for industries and the states, while continuing to ensure stringent and effective controls on hazardous air pollutants,” he said.


Earthjustice’s press release on the lawsuit against the EPA

The EPA’s announcement revoking the “Once In, Always In” policy