Leave No Poop Behind 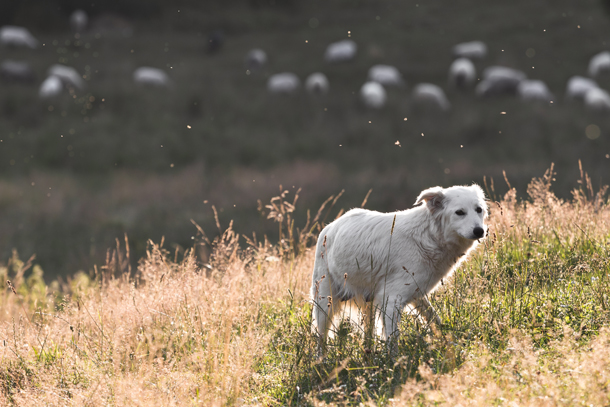 Research shows that most dog owners pick up after their pets in the street and at the local park, but often don’t take along a plastic bag when out hiking in the backcountry, assuming it’s no big deal. But Wes Siler, a contributing editor to Outside Magazine, tells host Steve Curwood that all that dog poop does add up to potential harm by introducing foreign bacteria and nutrients to forests, fields, and streams.

[SOUNDS OF BARKING AND PLAYING DOGS]

CURWOOD: In the city, the dog park is a great place for our canine companions to burn off some energy playing with other dogs, and for us to get outside for some fresh air.
Now dogs are amazing, of course, having co-evolved with us humans to share our shelter and food supply and do everything from guarding us to giving us unconditional love.
Yet our dear dogs may pose a public health problem for nature and us.

Most people, of course, dutifully pick up after their pets. But sometimes people forget or the dog goes where it seems to be okay, such as out in the backcountry. And though it may not seem like a big deal, some experts say we should always take as much care with dog waste as we do with our own. Wes Siler is a contributing editor at Outside Magazine and recently wrote about all that poop that America’s nearly 90 million dogs generate.

SILER: We're talking about over 20 billion with a "B" pounds a year of dog poop, which is sort of the main issue here. It's a huge scale, which is a massive problem.

CURWOOD: So, well you know, dog poop isn't exactly the most wonderful thing to look at and certainly nobody wants to step in it but, really, why is it a concern?

SILER: It's full of nasty stuff just like human poop. It's full of E. coli and fecal coliform and potentially parasites if it's an unhealthy dog and then also, if you think about the wilderness -- this was a new thing for me because I go camping with my dogs all the time -- I never thought about this, but dog poop is transporting foreign nutrients in sort of a massive scale into the wilderness. And it's full of nitrogen and phosphorus which are the nutrients in fertilizer. So, it's creating a nutrient imbalance in a foreign ecosystem or in a wild ecosystem, and that can lead to the ability for invasive species to grow or create algae blooms in water and that kills fish.

When hiking in the great outdoors with a dog it’s important to either bury a pet’s waste six inches deep, at least 200 feet away from a water source – just like you should for your own – or pack it out. (Photo: Maryland Department of Natural Resources)

CURWOOD: So, what's the research that actually quantifies how dog poop is potentially affecting streams or water sources?

SILER: You know, dogs are one of those things that aren't typically scientifically studied that heavily, so we're looking at two major studies here and that's it, we sort of have to extrapolate from there. So Leave No Trace, which is a wilderness education organization, did a study in Boulder, Colorado, where they found that in parks and on public lands in the city, something like 27 percent of dog owners aren't picking up their poop. And then there was a separate study done in Northern Virginia, they did DNA analysis of bacteria found in a stream and they found that dog poop was responsible for 42 percent of foreign harmful bacteria in that stream.

CURWOOD: Hmmm. So, alright, we should definitely then bring along those little plastic bag to pick up after our pet, whether in the great woods or at the great neighborhood park, but then, you know, the poop go into a landfill forever wrapped in plastic doesn't seem like a great option either.

SILER: Landfills get a lot of bad press, but they're actually a pretty proven system for eliminating the ability of waste to enter our ecosystem, so they're either lined with concrete or plastic or what have you that prevents stuff from trickling down in the ground water, They're capped, from preventing it from evaporating or otherwise entering the atmosphere. They're not perfect, certainly, but they're what we have and they do work to prevent the harmful stuff in trash and dog poop from entering the ecosystem.

CURWOOD: So, all right, so I’m out hiking in the middle of nowhere. I live in southern New Hampshire. In northern New Hampshire, we have these wonderful mountains, but Wes, I got to tell you I take my dog halfway up something like, say, Mt. Chocorua, and I don't really want to haul that plastic bag all the way back down the mountain with me filled with you know what. Those things get squishy in packs. What am I supposed to do? 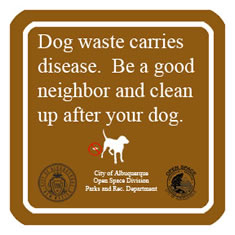 In many parks, signs remind dog owners to clean up after their dogs. (Image: City of Albuquerque Parks and Recreation)

SILER: Believe me, I get it. I don't want to haul poop either. Some environments, you do have to haul poop. If you're climbing up a pristine mountain, the Himalayas or the Cascades or something, you do have to haul it. But a lot of the time what you do with dog poop is the same thing you do with your own poop. You dig a six to eight inch deep cat hole and you bury it in the top layer of the soil, and in the top layer of the soil there's bacteria that are designed to break down poop and the poop disappears. So, literally, you just it treat the same way you would when you're camping. You dig that little hole, you kick the poop in it, job done. It takes two seconds.

CURWOOD: Now, how many dogs do you have, Wes?

SILER: I have two big dogs. I've got Wiley who's sort of an Akita mutt, 85 pounds, and I have Buoy, who's half Husky and half German Shepherd, just turned one and he's about 75 pounds.

CURWOOD: And just how many pounds of poop do they turn out a year?

SILER: [LAUGHS] Both of them produce together probably two pounds a day on an average day, and so you scale that to 365 days a year and you got a whole bunch of poop on your hands.

CURWOOD: Whoa, I hope it's not on your hands!

SILER: [LAUGHS] I hope not too. Everything’s gone wrong if it's on my hands.

CURWOOD: So, you have a couple of dogs yourself. When were you surprised by the scale of this problem?

SILER: You know, I just never really thought about it critically. Picking up dog poop as a normal dog owner to me it was just a matter of cleanliness. I don't want my yard to be full of dog poop. I don't want to leave behind poop on a hiking trail, but when I was camping I never really thought about the need to bury it. My dogs go poop in a bush and I left it always, but researching this article and the stuff that I learned has really taught me that we do need to be picking up the poop. And when you think about, you know, OK, I'm camping somewhere pristine, I’m going up to the mountains...what's one or two dog poops going to do to the environment? But you think about a pristine environment, altering it in any way does alter it and you scale that across you know, 100 campers a year, 1,000 campers a year, 5,000 campers a year in that location, and all of a sudden it does become a real problem. 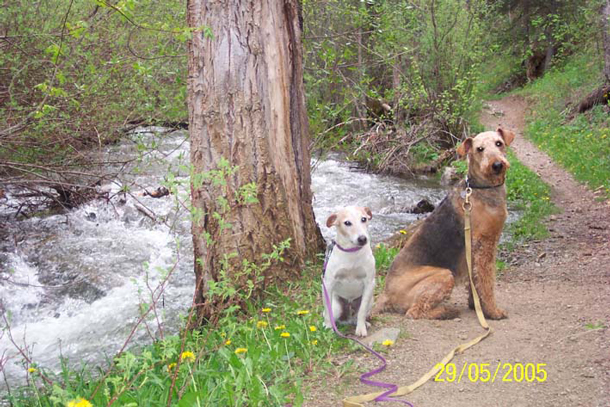 A study in Virginia found that 42% of controllable bacteria in a local river came from dog waste. (Photo: U.S. Forest Service)

CURWOOD: What prompted you to look into this?

SILER: [LAUGHS] I had written an article about the problems with mountaineers throwing their waste into glacier crevasses and that eventually being preserved and flowing out into streams in Alaska, and somebody from Leave No Trace, which is a really cool organization read that and emailed me and said, “Hey, let's talk about dog poop,” and here we go. So, I guess I'm a poop expert now.

CURWOOD: Mmm. OK. Well, you know in this business getting a scoop is a good thing isn't it?

SILER: [LAUGHS] Hey, the article has proved popular, so I'm not complaining.

CURWOOD: Wes Siler is Contributing Editor at Outside Magazine. Wes, thanks so much.

SILER: Thanks for having me. This was great.


Outside Magazine: “It’s Time to Talk About Poop”