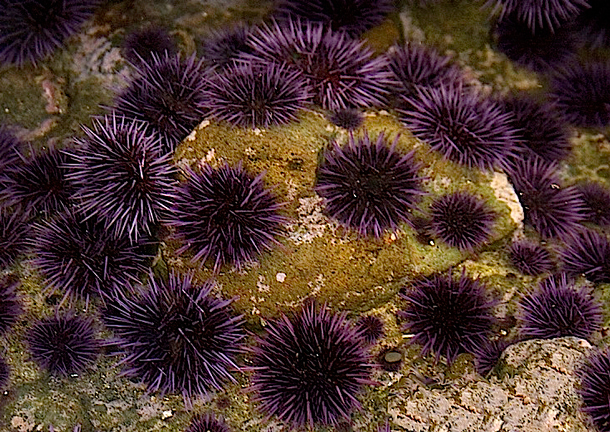 Purple sea urchins (Strongylocentrotus purpuratus), such as these photographed in the intertidal zone of Willows Beach on Santa Cruz Island off the coast of California, can produce amounts of sediment on par with the average river every year. (Photo: Gregory “Slobirdr” Smith, Flickr CC BY-SA 2.0)

Sea urchins help create their own homes by chewing up the rocks they live on. As Aynsley O’Neill reports in this week’s Note on Emerging Science, Purple sea urchins can create as much sediment as a river would deposit.

CURWOOD: It’s Living on Earth, I’m Steve Curwood. Coming up, a seaside town fights the dumping of toxic incinerator waste that puts residents and wildlife at risk.
But first this note on emerging science from Aynsley O’Neill.
[SCIENCE NOTE THEME]
O’NEILL: Many beachgoers are likely to be familiar with sea urchins: colorful, spiny invertebrates found on rocky reefs around the world. Typically, each sea urchin lives nestled in a rock pit that’s the perfect size, leading scientists to believe that they carve out their own little rock homes.

But until recently, there was no experimental proof of this. So researchers at the University of Villanova recreated the standard sea urchin habitat, a rocky costal reef, within a lab.

They carved dozens of flat surfaces of sandstone, mudstone, and granite, three types of rock from California’s coast, where the urchins live. Then they placed individual purple sea urchins on each surface. As these urchins fed on their typical diet of the algae growing on the rocks, it became clear that they were also eating the rock itself.

Over the course of a year, each of the flat rocks became measurably less heavy, though the granite and mudstone showed little-to-nothing in the way of noticeable pit formation. By analyzing the relationship between the laboratory rate of erosion and the density of sea urchins in the wild, researchers determined that for every acre they cover, these hardy animals create over 40 tons of sediment every year – and that’s roughly equivalent to the annual sediment load deposited by a medium sized river. Quite a feat for an animal with no legs.


The original purple urchin study article in PLOS One

The University of Villanova press release on the purple urchin findings