BirdNote®: Dippers on the Elwha 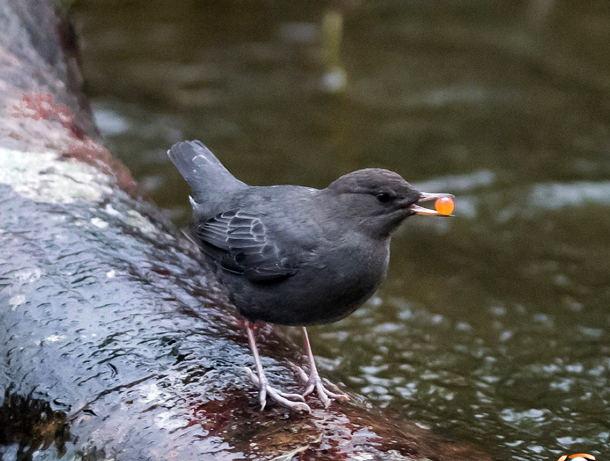 An American Dipper holds a salmon egg in its beak. (Photo: © Tony Mitra)

Many species in the Pacific Northwest benefitted from the removal of Elwha River dams, among them American Dippers, as Mary McCann explains in today’s BirdNote®.

CURWOOD: Fresh water is a precious commodity that we divert and try to control.
But sometimes, we reverse those constraints and let water run free – and that can bring a flood of support for wildlife. Here’s Mary McCann with today’s BirdNote

MCCANN: In 2014, on the Olympic Peninsula in Washington State, the dams on the Elwha River were removed. It was the largest removal of its kind in history. As the river ran free again, salmon from the Pacific were able to spawn upstream for the first time in 100 years – having a dramatic impact on American Dippers - lively little riverside birds.

Biologists with the Lower Elwha Klallam Tribe, the Smithsonian Migratory Bird Center, and Ohio State University drew small samples of blood from dippers that they then released unharmed. Analysis of blood and feathers show that birds with access to salmon have higher survival rates and the females have better body condition than those with no access to the fish. These dippers are also much more likely to stay on their home territories, rather than expend energy to forage widely. And they are 20 times more likely to attempt raising two broods in a season, the most important contributor to population growth.
So nutrients from spawned-out salmon and salmon eggs are giving the river’s ecosystem new vitality. 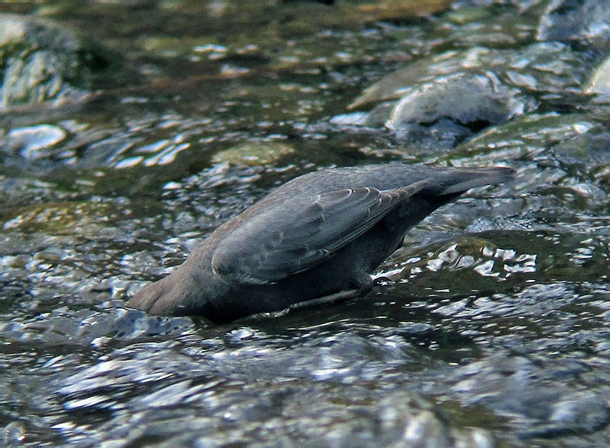 This American Dipper dives in for a meal. (Photo: © Mike Hamilton)

CURWOOD: For some photos – dip into our website, loe dot org.