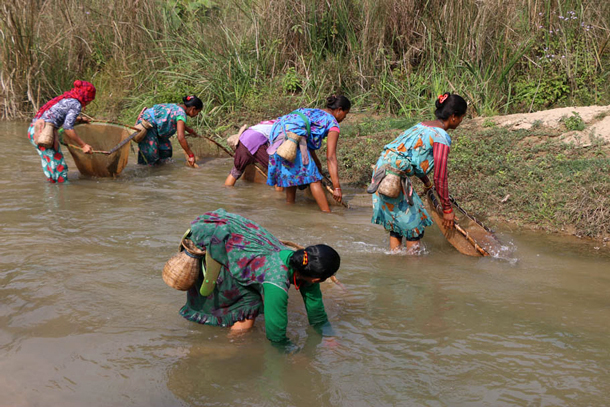 Local women fish in Ghodaghodi Lake, an area home to roughly 16% of all the birds in Nepal. (Photo: Ramesh Bhushal / The Third Pole)
2 / 4 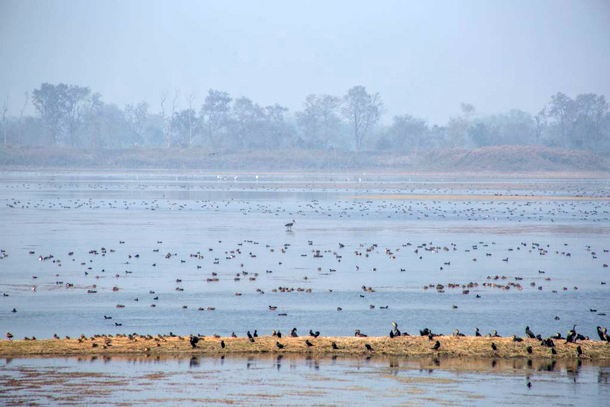 Migratory birds come from as far away as Siberia to spend the winter in Nepal’s wetlands. (Photo: Nabin Baral / The Third Pole)
3 / 4 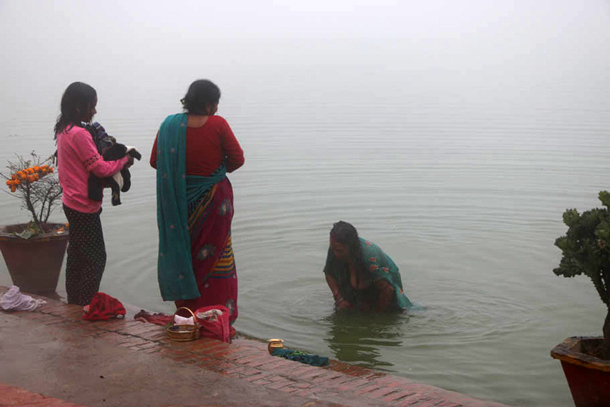 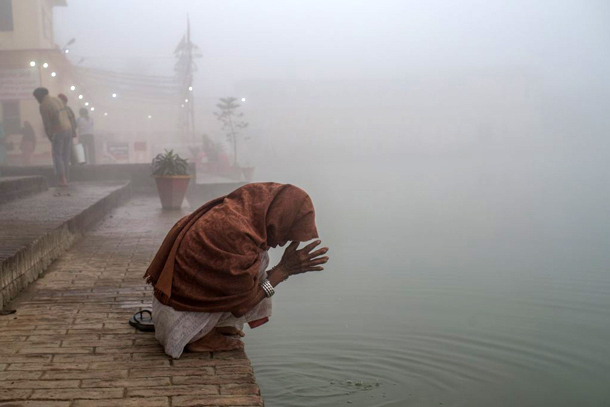 The lofty Himalayas give rise to an intricate system of rivers and lakes that make Nepal rich in wetlands. These are critical habitats for migrating birds and rare species like the Bengal tiger and one horned rhino, but the wetlands are not well protected and face numerous threats from development to climate change. Ramesh Bhushal of the online magazine Third Pole describes to host Steve Curwood these wetlands at risk.

CURWOOD: For many people, Nepal conjures up images of the snowcapped Himalayas, with Anapurna, K2 and Everest, the tallest mountain in the world.
Those icy mountains make Nepal water rich – with 6000 rivers and hundreds of lakes, in a country that’s roughly the same size as Iowa. Roughly 5 percent of Nepal’s land is covered with marshes and other wetlands, critical habitats for endangered species and migrating birds. And even though Nepal signed the Ramsar Convention to preserve wetlands, Ramesh Bhushal, the Nepal editor for the South Asian online magazine The Third Pole reports the government is doing little to protect these vital areas. He’s on the line now – Ramesh, welcome to Living on Earth.

CURWOOD: So, you recently wrote in an article in The Third Pole that wetlands are facing a lot of threats. What are the points of concern?

BHUSHAL: The first thing is that people don't understand the value of wetlands. A lot of people think that it is waste land, just waste. There is no reason to conserve or protect and people try to increase those areas. For example, schools are built or hospitals are built and governments also are not serious about protecting them. Their value has not been understood well by the communities, by the government, by the authorities. That is where the problem starts.

CURWOOD: So, I understand that the Ramsar Convention would protect the wetlands, but you're telling me that the government doesn't pay a whole lot of attention to that.

CURWOOD: Tell me about some of the species that depend on the wetlands for habitat and for their drinking water.

BHUSHAL: There are numerous wild animals which rely on the wetlands. For example, Nepal is one of the hottest spots for the migratory birds. So, birds travel all the way from Siberia and across the Himalayas and go to the southern plains of Nepal and even to India. So, those birds fly for thousands of miles and then stay for a few months in Nepal's wetlands, and then return back after a few months. Kind of a winter vacation, for example.

And Nepal is home to one of the world's endangered species called One-Horned rhinos. It is called Rhinoceros unicornis, and it is one of the largest populations is in Nepal. They depend on wetlands for drinking water. If you talk about the tigers, there are only 4,000 tigers in all of the world, Royal Bengal tigers, and Nepal has about 200. And these tigers also depend on those wetlands for drinking water or for other purposes.

CURWOOD: So, I understand that wetlands have a large cultural value in Nepal. Tell me about that please.

BHUSHAL: Most of the water bodies are near the villages. They worship God in those kind of wetlands. They go there to do rituals in Hindu culture. There's open cremation, so when somebody is dead, they take that dead body to that riverside on the bank of the river and then they burn it. Once you burn those dead bodies, it will flow down to the Ganges where they call it the holy river, then you are on the way to heaven. So, water is very important even after your death.

CURWOOD: So, Ramesh, what's the outlook for these wetlands. What do you see as the future for the wetlands of Nepal?

BHUSHAL: They are in sorry state to be honest, and if we don't protect them, they won't survive for long. It's for sure, because the area is decreasing, there are a lot of threats already. There and lot of people are saying that the rainfall pattern will change due to climate change and if rainfall pattern changes, then those wetlands may not get enough water to store. So, there's the threat of the climate change in the years to come as well as the human threat that has been place for long and it is still continuing. I'm hopeful that more efforts will be applied, but if you don't do it now then it will be too late.

CURWOOD: Ramesh Bhushal is the South Asia content coordinator for the Earth Journalism network and Nepal editor for the South Asian online magazine "The Third Pole". Ramesh, thanks so much for taking the time today.