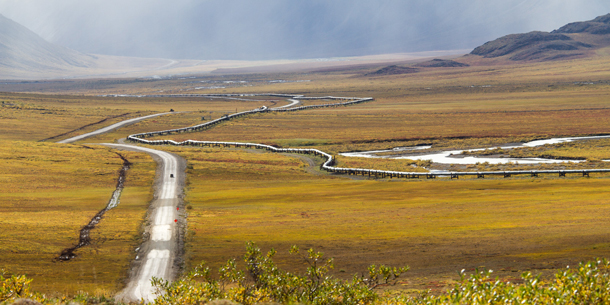 Fossil fuel production revenues accounts for about 90% of Alaska’s state budget, and much of the fuel is transported through pipelines such as the Trans Alaska Pipeline, above. (Photo: Arthur T. LaBar, Flickr CC BY-NC 2.0)

Temperatures in the polar regions are rising faster than in the rest of the world, and in Alaska the warming is melting permafrost and bringing stronger storms and rising seas that are eroding coastlines. But Alaska faces a dilemma. Ninety percent of state revenues come from fossil fuel yet burning oil and gas adds to global warming. What’s to be done? Lt. Governor Byron Mallott chairs the Climate Action for Alaska Leadership team that is seeking solutions. He spoke with host Steve Curwood.

CURWOOD: From PRI, and the Jennifer and Ted Stanley Studios at the University of Massachusetts, Boston, this is Living on Earth. I’m Steve Curwood. The human dilemma of climate change is front and center in Alaska. The far North is warming much faster than the rest of the world, melting permafrost and forcing coastal Alaskans to retreat from the sea. Yet nine out of every 10 dollars in state coffers come from the North Slope production of petroleum, which accelerates climate disruption as it’s burned. In an effort to build consensus to address this dilemma, Governor Bill Walker created the Climate Action for Alaska Leadership Team with Lieutenant Governor Byron Mallott as its chair. Mr. Mallott is also a Tlingit clan leader in Southeast Alaska. He joins us now – welcome to Living on Earth!

MALLOTT: Thank you so much.

CURWOOD: Briefly tell us, what are some of the ways that climate change is having an impact on Alaska?

MALLOTT: I spent personally many summers as a commercial fisherman out of my village of Yakutat. It's right on the Gulf of Alaska, but my oldest son is a commercial fisherman now, and he has fished commercially since he was 18 years old and he said to me, "Dad, I am uncomfortable, sometimes even fearful, being on the ocean now because so much has changed." He said the weather has changed. The movement of salmon and halibut that I fish, the timing is different than they used to be, and so our life is changing. We had in the Gulf of Alaska two years ago a very warm discreet body of water that folks called “the blob,” and it caused the cod fish which had been in the Gulf of Alaskan waters forever to essentially lose 70 percent of its biomass and cod fishing in Alaska was substantially decreased. These are indicators of a changing ocean for sure, and so we have coastal issues, we have in our Arctic areas permafrost, which is melting. We have a lot of change taking place.

CURWOOD: So, how does climate change affect indigenous communities in Alaska? Tell me some of the ways. 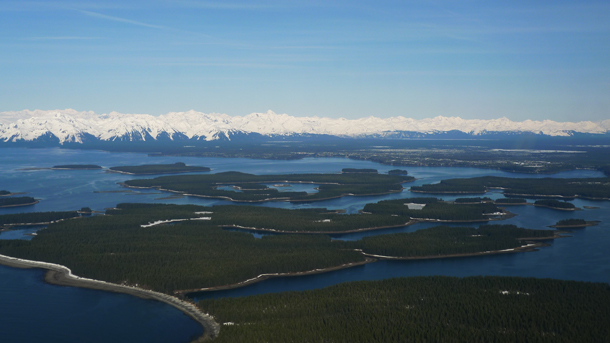 Lt. Governor Byron Mallot is from Yakutat, a small town on the Gulf of Alaska, where commercial fishing is a major industry being impacted by climate change. (Photo: Joseph from Cabin on the Road USA, Wikimedia Commons CC BY 2.0)

MALLOTT: Right. Native peoples live along our coasts. They live in the most verdant and productive areas of our state, and so they – or we – are heavily impacted by climate change. We have coastal erosion in the Arctic where ice is not shorebound in the way that it used to be, so fall storms are causing significant erosion and damage. Salmon is now becoming much more prevalent in the Arctic part of our state than has been the case in the past. The changes are palpable and they are significant.

CURWOOD: So, the Climate Action for Alaska Leadership Team was established in 2017. Who makes up this team and what are the current policy priorities?

MALLOTT: When the governor and I determined that it was time for Alaska to stand up its own climate change initiative, we believed that all of the residents of Alaska and their institutions, their communities, their leadership needed a voice in this dialogue and in the creation of the policies that will drive our response to climate change, and so the make up of the CAALT as we call it is statewide. It is very broad based. It includes all of the economic and social and leadership and institutional sectors of our state. The governor was particularly anxious that the youth have a voice, so we have two discrete youth members of the CAALT and we want the dialogue and we want the decisions that are made to be the result of a very broad based conversation across our state about the issues of climate change. 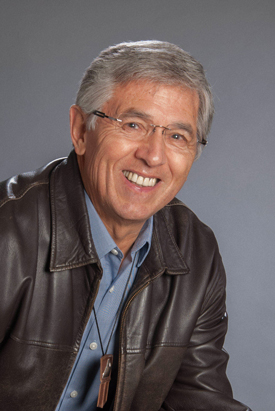 Alaska Lieutenant Governor Byron Mallott is a clan leader of the Tlingit Raven Kwaash Kee Kwaan of Yakutat, and his work seeks to build partnerships with Native Pacific peoples for indigenous-focused approaches to climate change. He heads the Climate Action for Alaska Leadership Team. (Photo: courtesy of Byron Mallott)

CURWOOD: Now, it will be a few more months before you are ready with a report from your work with the leadership team but, what's your best guess right now as to some of the responses that are likely to be in that report?

MALLOTT: We will definitely have policy recommendations and action steps identified to strengthen the transition from a fossil fuel-based economy to a renewable energy future. We will focus on emissions in our state. The entire population of our state is roughly three-quarters of a million people, the size of a medium-sized city anywhere else in our country. We have a very small industrial base and so our emissions are but a minuscule fraction of the total. But we will identify how we as communities, as a state, and as individuals can take proactive steps to reduce the emissions. I met, for example, with a group of youth and they inspired me to utter that my next vehicle will be an electric vehicle, it was nothing that I had planned prior to that time, but now I have an obligation and I feel good about it.

CURWOOD: [CHUCKLES] Indeed. Now, the impact on the climate around the world from Alaska is not so much about what you do at home regarding your emissions, but all the oil that you sell into the world market. I believe more than a million barrels a day come out of North Slope, and why do you support opening the Arctic National Wildlife Refuge to oil and gas exploration that is the even more oil? Surely, some of this position is being at odds with some of the goals you like to achieve with your climate plan.

MALLOTT: Certainly, but we have ... it is likely and this is speculation ... at least a quarter century of continuing to use petroleum at roughly the levels that we do now, followed by a weaning away during that period of time for national security purposes, for meeting market purposes, for revenue purposes for our state, and we think that for many reasons that it makes sense. We also know that we are moving on the North Slope to a future in which the production of natural gas will be as important as oil and the movement of natural gas to market, we are seven days by ship from China, for example, and the opportunity to take gas to market in China will significantly reduce their emissions. So, we think that the opportunities are there, that they are responsible and that we can both move to a future of renewable energy while meeting our fossil fuel energy today. 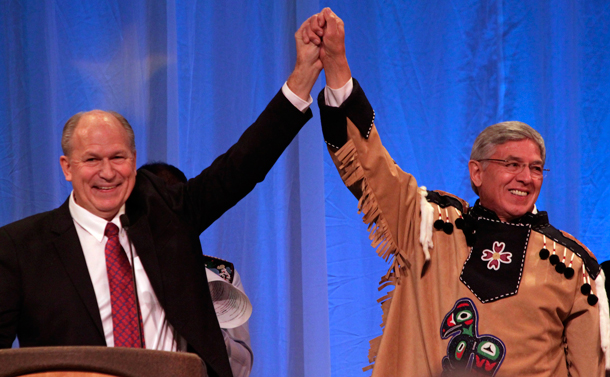 CURWOOD: By the way, what is the state of renewables in Alaska and how do they figure into your proposal?

MALLOTT: About a quarter of Alaska's energy now comes from renewable resources, wind, hydro. If you remove hydro, which is not considered a renewable resource – at least under federal definition – our renewable resource energy use is roughly 10 percent. We will have goals in our plan that is presented to the governor to continue to increase the development of renewable energy resources. We are a vast land here in Alaska and we have significant opportunity to do so.

CURWOOD: So, your peoples are the oldest on this continent, and what do you think that native peoples can tell the rest of us about how to deal with climate?

CURWOOD: Byron Mallott is the Lieutenant Governor of Alaska. Thanks so much for taking the time with us today, sir.

MALLOTT: Thank you so much.

New York Times: “‘Impossible to Ignore’: Why Alaska Is Crafting a Plan to Fight Climate Change”