Final Generation for the Marshall Islands? 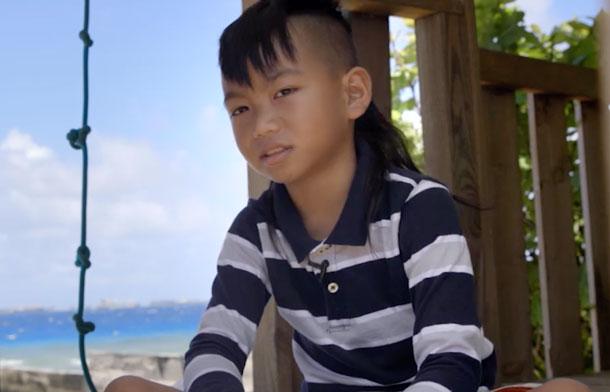 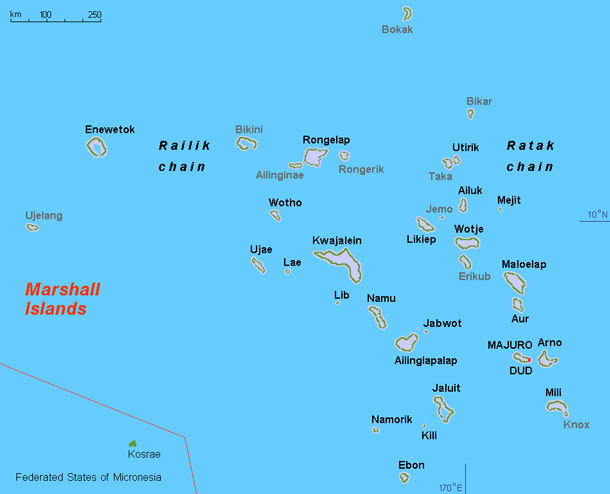 The Marshall Islands is a chain of coral atolls and small islands no more than six feet high. (Photo: Wikipedia Creative Commons)
3 / 6 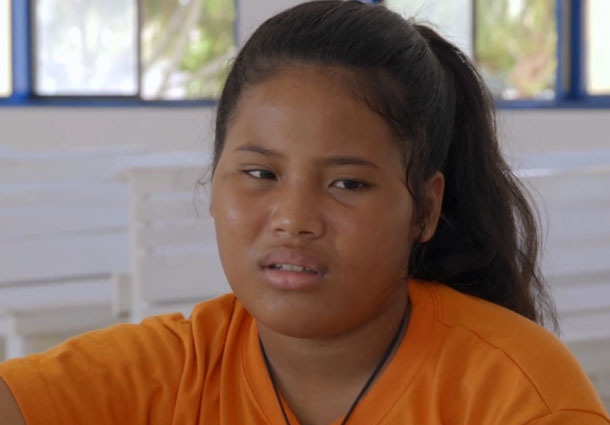 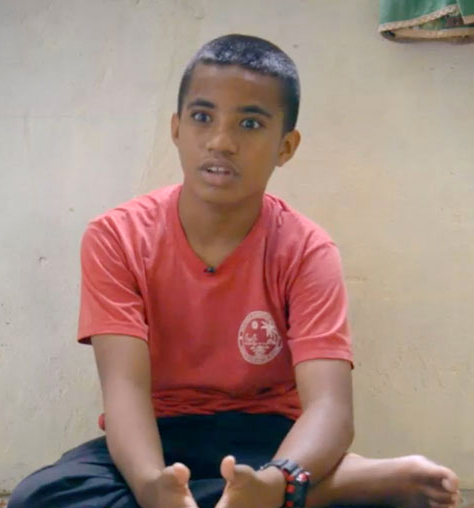 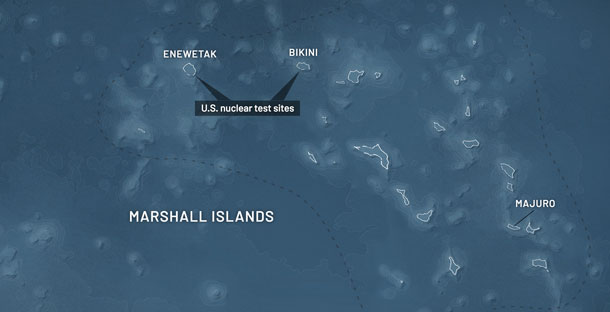 The United States dropped more than 60 nuclear bombs on Bikini and Enewetak in the 1950s. (Photo: The Last Generation)
6 / 6 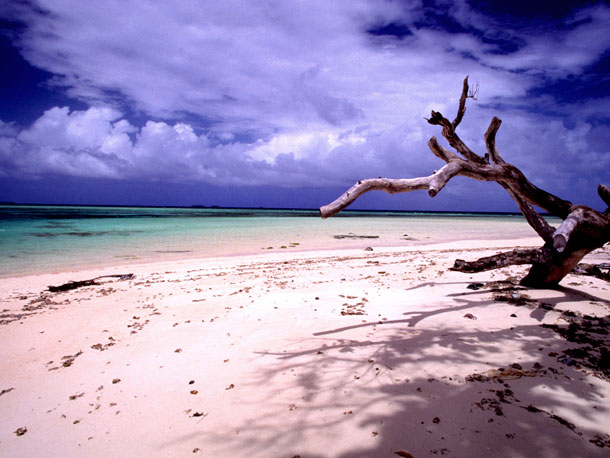 The coral atolls and islets of the Marshall Islands rise no more than six feet above sea level, and face acute problems from sea level rise linked to climate change. A new interactive documentary film titled, The Last Generation, looks at the crisis in the Marshall Islands from the perspective of three children who understand the perils and uncertain future they face living there. Host Steve Curwood talks with reporter Katie Worth who helped put the documentary together for Frontline PBS, and the GroundTruth Project.

CURWOOD: The vast Pacific Ocean surrounds the coral atolls that make up the former US territory of the Marshall Islands, and the Marshalls typify the vulnerabilities of low-lying lands facing climate disruption. The GroundTruth Project and Frontline PBS have produced an online, interactive documentary titled “The Last Generation” that reveals the realities of rising seas through the eyes of three young residents.

IZERMAN: My grandmother told me to come to the church. So I ran here and sit, watching everybody yelling, watching the babies crying. And it was not good.

WILMER: My mom woke me in the middle of the night. When I woke up I saw a lot of water. It was around my knees. People were evacuating very quickly. I wasn’t scared but I was shocked. In that moment I started talking to myself. Is this king tide happening because we are bad people?

CURWOOD: These are not rare occurrences in the Marshall Islands. Reporter Katie Worth of Frontline PBS worked on the documentary.

WORTH: The Marshall Islands is an archipelago of very, very low lying islands in the middle of the Pacific. Its capital, Majuro, where we were sits at an average of five feet eleven inches above sea level, which makes it one of the most vulnerable places on Earth to sea level rise. And it's already happening there. There's evidence that's showing that floods are already on the rise, there are more droughts. A recently study funded by the Department of Defense showed that with just about 15 inches more of sea level rise, islands like Majuro will be devastated by floods on an annual basis.

CURWOOD: Now your documentary looks at the Marshall Islands and the flooding risks there from the perspective of three different children. Why tell the story through kids?

WORTH: Climate change is one of those stories that people tend to turn the page on, and we wanted to make a story that would be hard to turn the page on, and that you want to lean forward on and learn about, and we wanted it to be compelling. My reporting partner Michelle Meisner had read somewhere that kids from the Marshall Islands can tell you all about climate change, and that intrigued us. So, what would they tell us? How well do they really understand? How do they think about their futures on this island that literally may no longer exist within their lifetime?

CURWOOD: Well, let's hear from one of those kids. This is a boy named Izerman. He's nine years old at the time you recorded this. He's playing at the beach picking up crabs and little sea creatures, talking about why he likes living on the Marshall Islands.

IZERMAN: The Marshall Islands, you can go outside, you can sleep in. There are no much cities anywhere. It's kind of like you're free. In my opinion, it's the only place that I would ever live in if I had to choose.

CURWOOD: But of course his family may have to choose. How untenable is it to live on the Marshall Islands right now. What are residents looking at, say, by the end of the century in terms of sea level rise?

WORTH: What the projections show is that in the worst case scenario in 100 years nearly every inch of these islands will be underwater, but that's the worst case scenario, and best case scenario is the advance of sea level rise will be much slower, and the people who live on islands like Majuro will have much longer time to adapt and to think about their future. As far as when people may have to leave, habitability is a really complicated question. So what is habitable to one person isn't habitable to another. One community might be willing to live with devastating annual floods and another community would not, but what we do know is the Marshallese have found ways to live on these islands for 2,000 years, and in an environment that most people would describe as extremely isolated and unforgiving. So, they are looking for ways to adapt.

CURWOOD: So, how are they getting fresh water on the island? I mean how much of this in terms of saltwater intrusion already, and for that matter, what about growing food? I mean, salt water is not great for agriculture.

WORTH: Saltwater intrusion is a big problem for agriculture. They're working on collecting rainwater more as drinking water, but that doesn't solve the problem of how they grow things. But there are these projects to have raised beds that buy them a meter, you know, buy them three feet. People that live on these islands are resourceful and they're thinking deeply about how to survive there as long as possible.

CURWOOD: Of course, the US has a long history in the Marshall Islands. In the 50s, our military tested, I think, it's a total of 67 nuclear bombs on the Bikini Atoll. Tell me a bit about that history.

WORTH: So, after World War II, the United States was looking for somewhere to test its most powerful nuclear weapons, and they chose the Marshall Islands because they seem to - from the US perspective to be far away from anything and small and powerless. Of course, for the Marshallese, they are not far away from anything – they are home – and it involved displacing many people.

CURWOOD: One of the children in your movie is a descendant of one of the families that had to leave Bikini during the atom bomb testing. She is 14-year-old Julia and in your film, she's wearing her school uniform. There's a picture of a nuclear explosion on it when you were talking to her. Let's hear a bit from her.

JULIA: I feel alone and sad because Bikini people are not there at their own land, and we are borrowing someone's own land to live. It's like homeless, yeah. If we move from here, I will be embarrassed, sad, angry and mad. I think it might happen because people are not listening.

CURWOOD: What does she mean there, "not listening"?

WORTH: They are watching what the world is doing, and the Marshallese have taken a real leadership role in the UN talks around climate change, and they have pushed for very ambitious goals to be set by the world. They have watched the world set less ambitious goals than the Marshall Islands would like them to, and now they're watching the US under the Trump administration back away from its promises and back out of the Paris agreement. So, even the goals that have been set are not looking as likely to be achieved as they did a couple years ago. And even kids are aware of this in the Marshall Islands and that is probably what she meant when she said people are not listening.

CURWOOD: How ironic is that Julia's family had to leave Bikini because of the nuclear weapons testing and now as the world's second largest emitter of greenhouse gases, we are forcing this current generation eventually to abandon their homes as well?

WORTH: That's not lost on the Marshallese. There's a very interesting historical touchstone for the Marshallese of being displaced. They've already experienced displacement and it's a really sensitive issue for them. It's caused multi-generational trauma for them, and so when they think about being displaced again, again by forces that are out of their control, they can grasp what that will look like for them and the pain it will cause generations of their people.

CURWOOD: As I understand it, it's not that difficult, despite the anti-immigration climate right now in this country, for Marshall Islanders, the Marshallese, to come, to live and work in the United States for the longest time it was a U.S. territory, and I guess is part of the compensation package for all the nuclear bombs being tested there. But, Kate, I believe you didn't talk to anyone who wanted to emigrate. In fact, there was 12-year old Wilmer who says he wants to be president of the Marshall Islands when he grows up, and he makes that point in such a poignant way.

CURWOOD: Whoa, that's such a sorrowful thought for such a young person.

WORTH: Yeah, we didn't speak to anyone who wanted to leave. I mean, the Marshallese have been living on these islands for 2,000 years. As former president Christopher Loeak are told United Nations, "Everything I know and everyone I love is in the hands of those of us here today." He said that at Paris, the meeting in Paris, that led to the Paris accord. It's their home, it's their culture, it's the best. For them it's the only place they want to be.

CURWOOD: What's next now for these people living in the Marshall Islands?

WORTH: Well, what the science shows is they're going to be experiencing more nuisance floods many times a year, more serious floods. Every few years and then eventually every year, their water table is going to become salted. They're going to experience more droughts. But they're also looking for ways to survive and thrive despite these challenges.

CURWOOD: The interactive documentary, "The Last Generation" is a joint project with the Ground Truth project and Frontline/PBS. Katie Worth is a reporter for it, and Katie, thank you so much for taking the time with us today.

WORTH: You're so welcome, and thanks for having me.