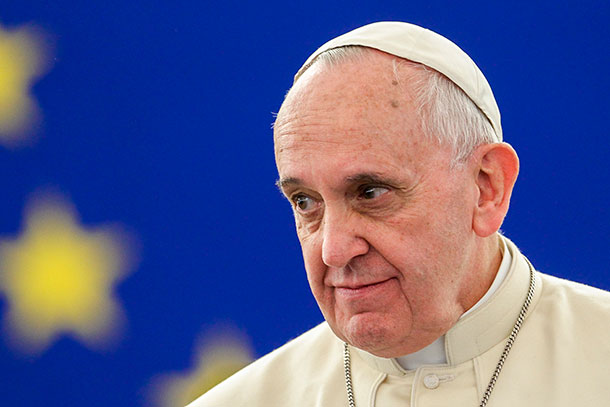 On this week’s Beyond the Headlines, Peter Dykstra and Steve Curwood discuss Pope Francis’s meeting with corporate leaders on climate change and the push to add a new and higher category to the Saffir-Simpson scale for hurricanes. In the history lesson, we look back at the fires of 1988 in Yellowstone National Park, and the recovery since that devastating event.

CURWOOD: Let’s take a look Beyond the Headlines now with Peter Dysktra. Peter’s an editor with Environmental Health News; that’s ehn.org and dailyclimate.org. On the line now from Atlanta, Georgia -- hi there, Peter, what do you have for us today?

DYKSTRA: Hi Steve, you know it’s been awhile since we heard from Pope Francis. A few years ago, he seemed poised to be the first truly global leader taking a big stand on environment and particularly on climate change. He did that Papal Encyclical a few years ago on the environment. Something completely unprecedented for a leader of the Catholic church.

CURWOOD: So, what’s going on now?

DYKSTRA: Well, after Laudato Si, the encyclical, the Pope has come back, and he’s gathered a meeting of corporate leaders: British Petroleum -- or as it’s now known, BP -- , Black Rock and other companies coming together to talk about their global responsibility to address climate change.

CURWOOD: So, the Pope has gone to Wall Street, huh?

DYKSTRA: The Pope has gone to Wall Street; President Trump has gone to Wall Street but kind of in the opposite direction. This past week we also saw that there was an effort underway to have the Energy Department help prop up dying coal and nuclear power plants in this country. Plants that can no longer cut it on a free market basis, they’re dying off, they’re shutting down. The President and the Energy Department would like to keep them open. You’ll remember a few years ago there was that push under Obama to help clean energy. A lot of people said that we shouldn’t be backing winners and losers. Apparently now we’re just backing losers. 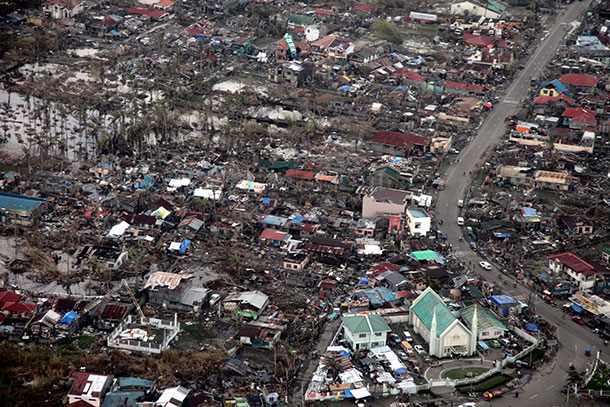 Increasing hurricane intensity has spurred some researchers to call for adding a “Category 6” to the Saffir-Simpson scale. During Typhoon Haiyan in 2013, for instance, wind speeds reached up to 195 miles an hour, causing wide-scale infrastructure damage and loss of life. (Photo: DFID (UK Department of International Development), Flickr, CC BY 2.0)

CURWOOD: [laughs] Hey, what else do you have for us today?

DYKSTRA: Something from Bob Berwyn who writes for our friends at InsideClimate News. Four climate scientists have published a paper in which they argue to expand the Saffir-Simpson scale -- that’s the scale by which we measure the intensity of hurricanes and typhoons. It goes up to Category 5, which is anything over 156 miles an hour in wind speed. But there have been storms in excess of 190 miles an hour that they say deserve Category 6.

CURWOOD: Oh, yeah, there’ve been some really big ones. I’m thinking of the one in the Philippines, Typhoon Haiyan, how fast was that one?

DYKSTRA: Right, Haiyan made it up to 195 miles an hour when it devastated several islands in the Philippines back in 2013.

CURWOOD: And, uh, you know I think they’ve changed the scale for heat waves in Australia -- now they use purple as the most extreme color on their chart.

DYKSTRA: The color purple’s been added to the heat chart in Australia because they’ve had such blazing summers. Of course, they’re going to get a break from that now since the Southern Hemisphere winter is beginning to set in. But still it’s a sign that everything everywhere is getting hotter and we need to be able to cope with it and address it.

CURWOOD: Let’s take a look into the history vaults right now. What do you have for us?

DYKSTRA: Let’s go back 30 years, June 14, 1988, Yellowstone National Park. A small wildfire broke out just outside the boundaries of the park in Montana. It combined with other wildfires within the park during a drought season, and Yellowstone National Park, through the summer of 1988, was ablaze. Eventually 36% of the park was touched by wildfire, a lot of it was devastated by wildfire, and it didn’t get put down until rain and snow came in mid-September three months later. 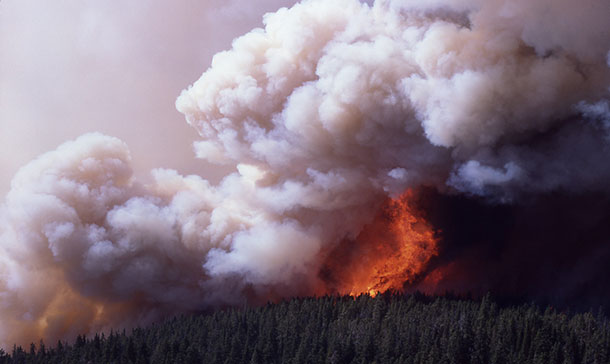 The 1988 fires in Yellowstone touched 36% of the park and 25,000 people helped put them out. (Photo: National Park Service, Wikimedia commons, public domain)

DYKSTRA: The recovery has been spectacular; the natural recovery of Yellowstone has been something that was predicted by scientists. It’s come true, the park is back. It has always been one of America’s gems and it continues to be.