Tough Climate At The G7 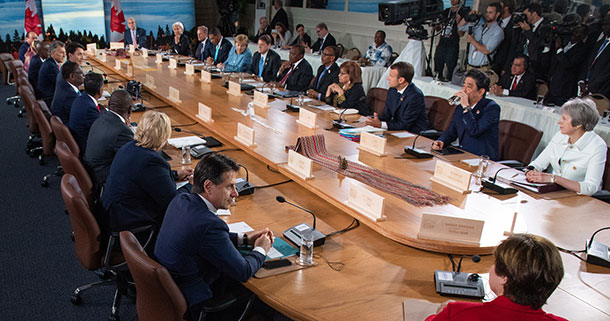 The 44th G7 Summit gathered leaders from Canada, France, Germany, Italy, Japan, the United Kingdom, and the United States. Together, they discussed topics such as the global economy, gender equity and climate change. (Photo: G7Charlevoix, Flickr)

The Group of Seven – including leaders from Canada, France, Germany, Italy, Japan, the United Kingdom and the United States – recently met for the 44th G7 Summit in Quebec, Canada, with climate as one of the items on the agenda. President Trump walked out before the climate discussion. The Summit ended in a conspicuous rift between the United States and its closest allies, with implications for international climate policy. Host Steve Curwood speaks with Alden Meyer, the Director of Strategy and Policy at the Union of Concerned Scientists.

CURWOOD: From the Jennifer and Ted Stanley Studios at the University of Massachusetts, Boston, this is Living on Earth. I’m Steve Curwood.

A key agenda item at the Group of Seven leadership summit has been international climate negotiations, but when these heads of government recently met in Quebec, President Trump left the meeting early. Mr. Trump skipped the discussions on climate change, refused to sign the G-7 communique, and insulted Canadian Prime Minister Justin Trudeau, calling him weak and dishonest. Climate negotiation expert Alden Meyer is the Director of Strategy and Policy at the Union of Concerned Scientists.

Welcome back to Living on Earth!

MEYER: Thanks, Steve. Good to be with you.

CURWOOD: So, tell me how important was this G7 Summit to the goals of the Paris climate agreement?

MEYER: Well, it was a key moment for the other six countries to realize that Mr. Trump is not a solid negotiating partner, and that they would have to unite and move ahead without him. I don't think this was a surprise to many of them. They've experienced him over the last year and a half since he took office. But I think his behavior at the summit really imprinted on them personally that they're going to have to go it alone, not just on the climate issue, but on a whole range of challenges. Of course, the issue that really precipitated the breakdown at the G7 Summit was trade, and President Trump’s unilateral imposition of tariffs on many of our key allies.

German Chancellor Angela Merkel called the decision by President Donald Trump and the US delegation to abstain from the G7 summit's statement "sobering and somewhat depressing" https://t.co/Ct23jL6vn1 pic.twitter.com/bUsmavpLqc

CURWOOD: So, given that Mr. Trump didn't participate, what needed to be decided by the others at this meeting?

MEYER: They need to decide what signal they want to send particularly to developing countries about how serious they are at meeting their Paris commitments; at ramping up financial assistance for developing country action; and laying out long-term, more ambitious goals for emissions reductions in their own economies; and they did that. They did that by bifurcating the section in the communique on climate change, oceans and energy with a very short common paragraph that applied to all seven countries, and then much more detail on what the other six countries were willing to commit to.

CURWOOD: Talk to me about how that meeting ended and the mood as things wrapped up.

MEYER: Well, I mean the mood was already a little bit helter-skelter because of the president arriving late, leaving early; of course, having some very rough discussions from what we understand in the private room on trade; and then of course, it really went south when the president tweeted that he was instructing the United States representatives to withdraw from the joint communique that he had hours earlier agreed to in the room with the other six leaders. And we understand that was triggered by a fit of pique at watching Prime Minister Trudeau’s press conference after the summit wrapped up where Prime Minister Trudeau just reiterated what he had said in the meeting to the president, which is that he would be forced to react to the U.S. unilateral tariffs on steel and aluminum with tariffs of their own on American products, and apparently that pushed the president over the edge. 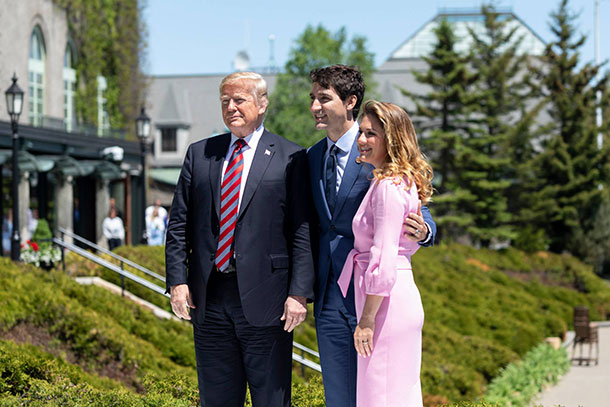 US President Donald Trump (left), Canadian Prime Minister Justin Trudeau (center) and Sophie Trudeau (right), prior to Trump’s early departure from the summit and his firing off a barrage of less-than-friendly tweets at Mr. Trudeau. (Photo: Official White House Photo by Shealah Craighead)

He instructed the US to withdraw and, of course, the next day we saw some of his representatives using some very overheated rhetoric on the talk shows, saying there was “a special place in hell” for people like Justin Trudeau.

CURWOOD: So, President Trump comes late, leaves the talks early. Looking ahead, Alden, what sort of implications could that behavior have on future international talks, including those on climate?

MEYER: Well, I think it just underscores what people were already intuiting, which is that President Trump is not a reliable negotiating partner. Of course, we saw that on Paris; we saw that on the Iran deal; and now we're seeing it on trade and on the G7 communique. It also, I think, ups the incentive for the Europeans in particular to figure out how they find other negotiating partners on a range of issues. The obvious one they're all trying to figure out is China, where their interests can align with China versus where they still have some differences or competition on issues like trade.

CURWOOD: How furious are the other G6 at the United States climate and the whole package? There is this now viral picture of Chancellor Angela Merkel from Germany leaning over the table staring at Trump, and Trump has his arms crossed looking very much like a petulant child who's been kind of caught doing something wrong. 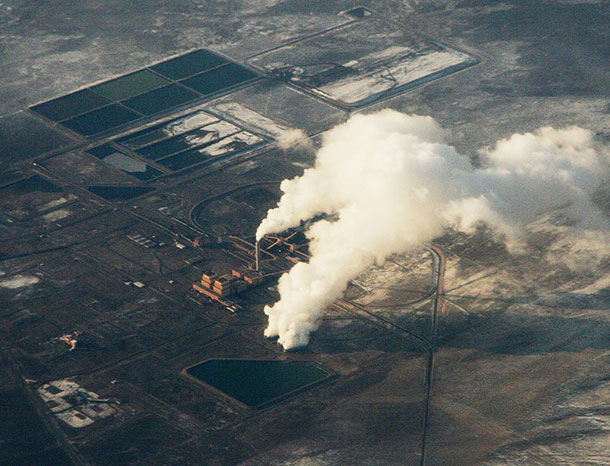 The United States stood out as the outsider during the G7 by continuing to support the fossil fuel industry while the other six countries stood firm in their commitment to the Paris Climate Agreement. (Photo: Doc Searls, Wikimedia Commons)

MEYER: Well, I think there is a fair amount of anger from the other leaders that were at the summit, you know, because what I understand from reports from people that were in the room, is that the negotiations were tough, but they did find accommodation with the US; they worked out agreement on the communique; they accepted some of President Trump's and the US team's request for some rewrites and edits; and that they thought they had a deal. And so to make those kind of concessions and to try to come to consensus only to have the president withdraw the US by tweet, I think really took a lot of people off guard. It wasn't something they'd ever experienced before. It's clearly not the way you do diplomacy, the long-term implications that I think remain to be seen.

CURWOOD: Alden Meyer is Director of Strategy and Policy at the Union of Concerned Scientists. Thanks so much for taking the time today, Alden.

MEYER: I was glad to join you, Steve.