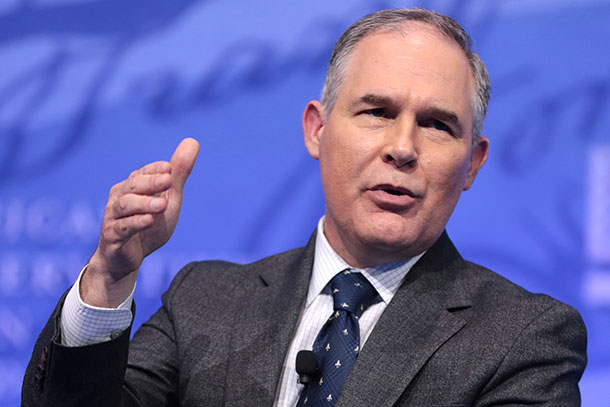 The Toxic Substances Control Act of 1976 was strengthened by a Congressional overhaul in 2016 that provided uniform federal review standards for thousands of everyday chemicals, and gave the EPA power to review them for safety. But just two years later, the EPA is narrowing the mandate. Britt Erikson of Chemical and Engineering News tells Host Steve Curwood that EPA is investigating ten chemicals of special concern out of the tens of thousands that need review with criteria focused on direct exposure that ignore air and water quality issues and overlook legacy uses of substances like asbestos.

In 2016, the decades-old Toxic Substances Control Act, also known as TSCA, received a long-awaited update after a bipartisan push. The legislative reboot gave the EPA a greater level of authority to regulate chemicals both new and existing, and the Obama Administration began reviewing 40,000 or more chemicals, with ten of immediate concern.

But there has been a change of direction under the EPA led by Scott Pruitt, and we turn now to Britt Erickson, who is Senior Editor at Chemical and Engineering News. Britt, how is the Trump Administration using their powers under TSCA today?

ERICKSON: Well, they're really not. It's almost business as usual. It's like the law had never been revised. The Trump administration is claiming they don't have enough time to implement the law; they don't have enough time to look at all of these uses; therefore, they have to just narrow down the amount of uses that they will evaluate. To their credit, they were given this huge task to do in a very short amount of time.

CURWOOD: So, wait a second. Something could be entirely toxic. The EPA says, hey, all right, we don't have enough time to check, so that's fine.

ERICKSON: It seems to be. They're looking at very narrow uses. So, if one particular use is fine, then they give it the green light. If, later down the road, someone says we want to use it for this use, well, then they will regulate it at that time.

CURWOOD: And what are those 10 chemicals?

ERICKSON: Well, there's about seven of them are solvents, so things like trichloroethylene… ou may have heard of PERC used in dry cleaning, it’s tetrachloroethylene… there is methylene chloride in paint strippers. 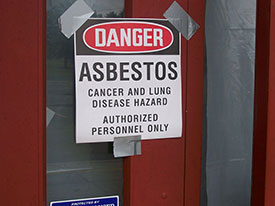 Asbestos is one of the 10 chemicals currently being evaluated by the Environmental Protection Agency. Because of the EPA’s newly announced methodology, their risk assessment will be excluding the impact from “legacy uses” of asbestos and certain other chemicals. (Photo: Ktorbeck, Wikimedia Commons, Public Domain)

ERICKSON: It absolutely is. It will turn into carbon monoxide, so it acts a lot like carbon monoxide, and it will kill you if you get too high levels of inhalation exposure to methylene chloride. In fact, it's actually happened to a few men who have used paint strippers in an enclosed space.

CURWOOD: How fair is it to say that the EPA is really ignoring how these chemicals are present in the air or the water in the ground?

ERICKSON: I'd say it is fair to say that. They're looking at current uses, and they're not looking at legacy uses for things like asbestos that's already in the environment, it's already in buildings. They're going to look the other way and not include that in the risk evaluation.

CURWOOD: Britt, help me. Some folks are saying that the EPA is actually going to ignore a huge amount of chemicals being emitted into the atmosphere and into the water. How accurate is that and what's the number, if you know?

ERICKSON: I would say that is a fair assessment. The Environmental Defense Fund, an environmental group, did an analysis and they found 68 million pounds of chemicals would still be released into the atmosphere, into the water, into the soil.

CURWOOD: So, what are the potential health impacts of the way that the Pruitt EPA is implementing the TSCA changes?

ERICKSON: Well, I think it's a shame for the subpopulations, the vulnerable subpopulations – the pregnant women, the children, the elderly, the immunocompromised. They're the ones who are really going to be hit by by the weakened rules.

CURWOOD: And to what extent are these chemicals carcinogenic and cause cancer?

ERICKSON: Most of the solvents are carcinogens, and they're extremely hard to get rid of once they're in the environment.

CURWOOD: So, you've been working in this arena for a number of years. What's your overall summary of how you think that the EPA is handling the risks from these toxic chemicals?

ERICKSON: Well, I think we were on the right track a few years ago when we were under the Obama administration. We had just passed that new TSCA, and EPA was looking comprehensively. They put out some proposals on how they would regulate these chemicals in commerce, and they said we will look at all of the uses. But now we've sort of turned the corner, and now we're looking only at very narrow uses, so I don't think we've improved very much.

CURWOOD: Any advice for people listening to us about how they could better protect themselves? Because it seems like the government is not going to protect us from some of these chemicals.

ERICKSON: That's right. I think a lot of these chemicals are things that your average consumer is probably not going to be exposed to. Methylene chloride in paint strippers – I mean, if you choose to use a paint stripper that's a chemical paint stripper, I think you need to wear the proper protection and you need to be aware of the hazards. Until they're banned from the market, people need to be aware that, yes, these products are dangerous and we do need to wear safety protection when we use them.

CURWOOD: For people who are concerned about these chemicals and and want to avoid an exposure, where can they get authoritative information about them, lower their risk?

ERICKSON: Well, one place they can go is the Agency for Toxic Substances and Disease Registry. That is part of the Centers for Disease Control and Prevention in Atlanta, Georgia, and they create toxicity profiles for every chemical, and the consumers can look at that to determine whether a chemical is hazardous. Now, there's also a component to risk and that's exposure, so you have to also be exposed to a chemical to actually be harmed by it even if it is a dangerous chemical. So, if you take safety precautions, you won't be exposed. So, if you're using these methylene chloride paint strippers and you wear the proper safety gear, you'll be OK.

ERICKSON: Well, what I can say is that the 1,4-Dioxane is an impurity in consumer products like cosmetics. So consumers could potentially be exposed to something like that. It's no longer used as an ingredient, but it's a byproduct in one of the processes that the manufacturers used to make surfactants that are used in these products. So, even though they're no longer adding it to your… and it won't show up on your ingredients list, it's an impurity and so I think things like that are problematic.

CURWOOD: Britt Erickson is Senior Editor at Chemical and Engineering News. Thanks for taking the time today, Britt.

ERICKSON: Thanks for having me.


The NYTimes: “The Chemical Industry Scores a Big Win at the EPA”