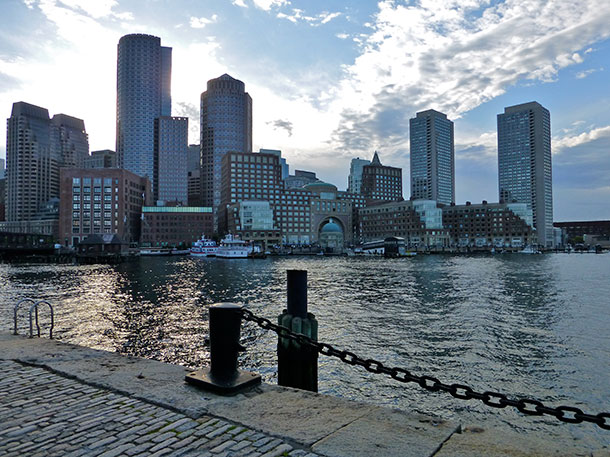 Boston Harbor is subject to tides as large as 12 feet, and most of its original tidal flats were filled in the late 1800s. As sea level rises, storm surges combined with high tide are putting more and more of downtown Boston at risk of flooding. Journalist Courtney Humphries and Host Steve Curwood discuss.

CURWOOD: It’s Living on Earth, I’m Steve Curwood. Sea levels are rising everywhere, and the advance is a steady creep. But storm surges can provide early signs of looming inundation with tides rolling the dice of just when and where. The City of Boston is built mostly on land that once was tidal flats. It got a wakeup call earlier this year when the first of a string of Nor’easter storms hit just as the tide was peaking. The ocean spilled into the subway and homes up and down the nearby coast. The Union of Concerned Scientists projects by the end of the century, Boston will see close to seven feet of sea level rise, putting 89,000 Massachusetts coastal homes worth $63 billion at risk from tidal floods. Courtney Humphries is a writer and graduate student at UMass Boston. She gave us a tour of Boston’s waterfront.

HUMPHRIES: Boston has this great tidal range of over 10 feet. In the US, most tidal ranges are more three to five feet, that kind of thing. So, Boston is kind of unusual for U.S. cities that way.

CURWOOD: So, let's go back in history. What was Boston's relationship with the tides back in the day? 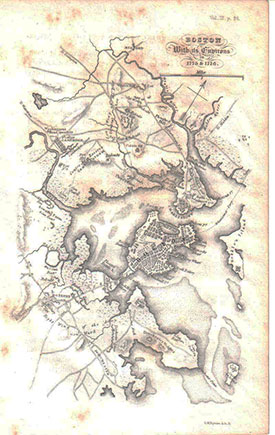 A map of Boston Harbor in 1775. Boston was a peninsula attached by a thin sliver to the mainland, where today’s Washington Street runs. Land for neighborhoods like Back Bay and Seaport were still underwater. (Photo: Public Domain, Wikimedia Commons)

HUMPHRIES: One of the nice things about having these tides come in and out is that it did actually flush out the harbor. It was a great way for the city to get rid of its waste back in the day when we just put everything into the water. For a long time like many cities in the 19th century, it struggled with all the sewage that was being just dumped into the waterways, and I would say at low tide Boston was notorious for smelling very badly. [LAUGHS]

CURWOOD: Let's fast forward to 2018 when people became well aware of Boston's tidal situation. Talk to me about that.

HUMPHRIES: Well, I think you know in recent years we have become more aware of tides, partly because of king tides. When we have these king tides, which are especially large, maybe a couple times a year, people have noticed that the water actually will pour over into some areas of Boston on the waterfront. But then, you know, this winter we had these Nor'easters and when they coincide with high tide, it was flooding that we haven't seen before. But, you know, the sea levels are rising. A lot of the things that wouldn't have come on to dry land in Boston are coming on to dry land now and they're creating floods.

CURWOOD: One thing about tide, Courtney, is that it comes with quite a bit of power. This isn't a sort of gentle stream, but it really slams into the shore. How did that affect what happened during the Nor'easters?

HUMPHRIES: So, it's sort of a combination of what's called the storm surge from the storms and that's all the wind building up really creates this wall of water, and when that coincides with high tide, it just creates this huge flooding potential. And so, we've actually been very lucky with our tidal range in some ways because when a storm hits, a really bad storm hits at low tide, that's a 10 feet difference, so we don't actually get as bad of a storm as we might. So, the tidal range, I think, is going to become much more important as we deal with storms in the future.

CURWOOD: So, what happened in Boston during Superstorm Sandy with the tide here? 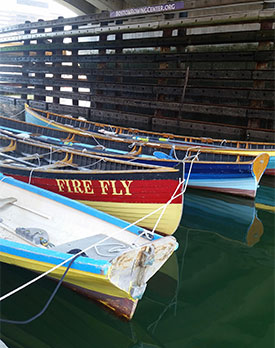 HUMPHRIES: Well, we were lucky. We were luckier than New York. Superstorm Sandy hit at a lower tide, so if it had hit at high tide, it would have really damaged the city a lot more, and I think that that awareness that the tide sort of saved us in that sense, has led to a lot of the planning that we have now around climate change resilience in Boston.

CURWOOD: So, Boston will celebrate its 400th anniversary in just a little while. What will this area be like in 400 years with what we know about rising seas and climate disruption?

HUMPHRIES: Well, it will be under water, I think, unless we can stop – really, really quickly stop greenhouse gas emissions, sea levels will continue to rise. I do think we can protect a lot of parts of Boston. Maybe we'll be going through another era of reshaping the city physically the way that they did back in the 19th century, but for different reasons.

CURWOOD: Courtney Humphries is a journalist and a PhD student in environmental science at UMass Boston. Courtney, thanks so much for taking the time with us today.

HUMPHRIES: Thank you for having me.


Courtney Humphries’ article in The Boston Globe | “Boston Vs. the Rising Tides”

The Boston Globe | “Scenes from the powerful Nor-easter”

National Geographic: “How Boston Made Itself Bigger”