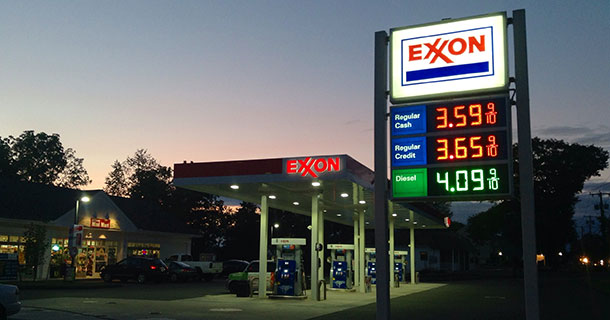 Shell, BP and Exxon Mobil are among some of the major fossil fuel corporations who have voiced support for a carbon tax and dividend plan to limit global warming emissions. (Photo: Mike Mozart, Flickr CC BY 2.0)

Recent US efforts to address global warming at the federal level have been hobbled by partisan gridlock, with many conservatives denying climate disruption is a human-induced problem. Now a bipartisan coalition of moderate and conservative Republicans and Democrats is planning a post-election push for a market-based approach to curb emissions. Their ‘Carbon-Dividend’ plan has buy-in from several environmental groups and major fossil fuel companies. Former Senate Republican Majority Leader Trent Lott of Mississippi and former Senate Democratic Deputy Leader John Breaux of Louisiana co-chair the advisory committee of Americans for Carbon Dividends, and Sen. Breaux joins Host Steve Curwood to discuss their efforts.

DOERING: From PRI and the Jennifer and Ted Stanley studios at the University of Massachusetts Boston, this is Living on Earth, I’m Jenni Doering.

The world is looking to the fall elections in the United States to settle or advance some critical issues. Any change of control in Congress might unstick the deadlocked immigration debate and could even lead to impeachment for President Trump. But there is a matter of even greater importance for humanity that a bipartisan coalition is looking to address after the elections. And that is climate disruption. Americans for Carbon Dividends is led by former Republican senator Trent Lott of Mississippi and former Democratic Senator John Breaux of Louisiana. They believe both sides of the aisle can get behind a carbon fee. It would start at $40 a ton to be charged at refineries, mines, wells and ports, with all revenue returned equally to citizens as a dividend.
Senator John Breaux joins us now, welcome to Living on Earth. 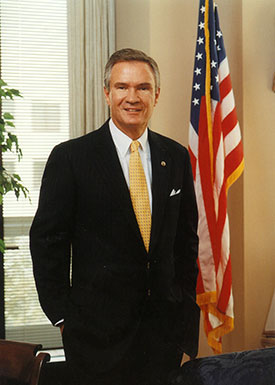 BREAUX: Steve, glad to be with you. Look forward to our visit on climate dividends.

CURWOOD: So, tell me. Why do we need a market-oriented plan to fight climate disruption that appeals to conservatives as well as liberals?

BREAUX: Well, the simple answer is the fact that we spent over 30 years trying other approaches and they haven't worked. If you think about it, we've tried the Paris Accord and we've pulled out of that. The Kyoto Protocol back in the 1990s didn't work. The Clean Air Act has not worked like it should have. The cap and trade legislation has not passed, so the answer is that we've tried a whole bunch of different approaches – more regulations from the government to try and limit the amount of carbon we emit into the atmosphere – and so far nothing has worked very well. So, we decided that this method of putting a fee on those who emit the carbon emissions and then returning that amount of money back to the public is a way to get both sides to come together and actually have a chance of getting something done.

CURWOOD: So, why a carbon tax and dividend? Why not simply a tax?

BREAUX: Well, because a lot of more conservative members, particularly on the Republican side, would be against any proposal that has the word tax in it. So, what we're proposing is an entirely different approach. We have approximately a $40 fee proposed on a ton of carbon that is emitted by refiners and those that produce carbon. That would be collected by the treasury, but instead of going into the big pot of money here in Washington to be spent on all kind of different programs, that fee would go back to the American public. Every citizen in the country would be eligible to receive a portion of that fee. The average figure looks like it's about $2,000 for a family of four and that would be every year. So, the companies would not want to have to pay that fee, so they would move to alternative fuels and reduce their carbon emissions because that portion of it they still emit, but to have a fee put on it… But the fee would go back to the people. So, we think it is the best of both worlds. I think we feel that it would get the job done. 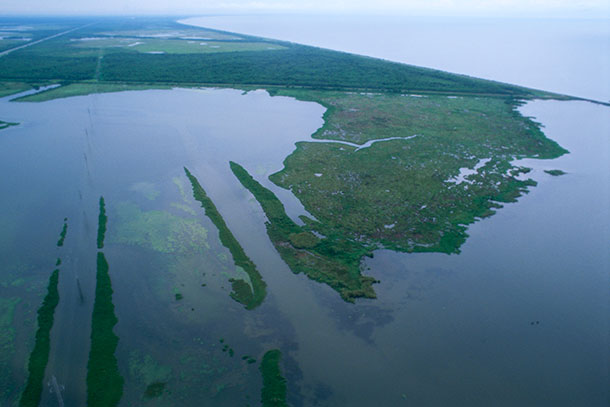 CURWOOD: Senator, when did you become, well, deeply concerned about climate change? Being from Louisiana, one might guess Katrina, but you tell me your story.

BREAUX: Well, I lived on the coast of Louisiana, and every year we saw a little bit of our coastline disappear. And unlike a hurricane or earthquake, when you have coastal erosion like we have, that little piece of Louisiana was never coming back. And I grew up in that atmosphere, so we saw it in the real world what it meant to have coastal erosion and we connected it with the climate change and increased weather patterns and increased hurricanes, etcetera. So, I sort of grew up knowing that there was something going on out there that needed to be corrected. And we weren't able to get it done while I was in Congress, but we're still working on these type of projects. So we have a coalition that is now being led by Senator Trent Lott, a Republican who served with me from Mississippi, and myself, along with another whole group of people. This was originally started by Jim Baker and George Shultz, two Republicans who came up with the idea that a market-based approach was much better than a more detailed federal regulatory or regulation type of approach.

CURWOOD: Now, Senator Breaux, why does the proposal call for eliminating some of the EPA regulations including the Clean Power Plan, which President Trump has tried to begin the process of replacing – although I'm not sure that they have had any legal success with that. But why get rid of the Clean Power Plan?

BREAUX: Well, we want to get rid of some of the regulations that won't be necessary if you move forward with a carbon fee of $40 dollars a ton on a carbon emissions, and that fee will be much more effective than the regulatory approaches at actually reducing carbon. So, we're trying to go with the approach that would be most effective and also the one that has a chance of getting passed and adopted by the Congress.

CURWOOD: Now, we've seen the rise of a bipartisan caucus in the house. Carlos Curbelo, the Republican from Florida, has been in the leadership of that calling for climate action. But to what extent do you think the conservative members of Congress will be able to move forward, given that there's so much in the Republican leadership that continues to deny the danger of climate disruption – the science of it?

BREAUX: Well, we have a lot, Steve, already on board. I mean, there's a lot of Democratic support. Sheldon Whitehouse, Senator, is very much in the lead on doing something about climate change. We have Lindsey Graham, for instance, on the Republican side in the Senate who's expressed his support for doing something like this and the direction of helping to reduce the carbon emissions. So, we've got some real leaders that are there already, and you mentioned the Climate Solutions Caucus, which is in the House led by Carlos Curbelo from Florida, of course, and others in the leadership. And many of them are on the actual tax writing committee, the Ways and Means Committee. In the House, they would have jurisdiction over this type of an approach, so there's a base to work with among Republicans in the House as well as the Democrats in the House. 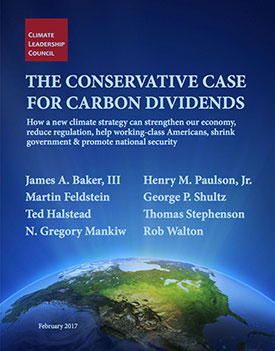 So, this is not going to be a sprint. I mean, I think it's more of a marathon. I mean, I don't want to have something just thrown out on the floor, and if people don't understand it, they're not going to vote for it. But if we can help educate them about what we're talking about and it's a less regulatory, less government-intrusive, free-market type of an approach which has environmental groups supporting it – well, then we have, I think, a very sound basis to move forward with something that could work.

CURWOOD: Sounds to me like you're thinking of after the present fall elections to move this forward.

BREAUX: Oh, absolutely. I mean, it's not going to happen now, but we're going to be spending the time between now and the end of this year meeting with members of Congress and doing op-eds and papers and speaking to journalists like yourself to try and help get the message out – that this is a new approach, there’s a carbon dividend fee that's going to be given back to the American people. And the studies indicate that it could reduce the carbon emissions by three times more than the regulatory approaches, which have not been successful.

CURWOOD: What's been the response of the major fossil fuel companies? I mean, you're from Louisiana. You've worked over the years with ExxonMobil, Shell, BP. What do they say about your proposal?

BREAUX: Well, those are the ones that are doing, because of their refining activities, most of the emissions of carbon, and I think they recognize that something needs to be done. And to their credit, they have become corporate founding members of this effort – companies like ExxonMobil and Total and Shell Oil – and we're pleased to have them on board. I think they can be very effective with more moderate to conservative Democrats and certainly with Republicans as well. But we also have the Nature Conservancy and Conservation International on board, so it's a relatively unique combination that we have behind us and supporting us in this effort.

CURWOOD: Talk to me briefly about the border carbon adjustments aspects of the proposal. When we first spoke about this last year, there was not a trade war in the making, a problem with tariffs. But right now, there's a lot of sensitivity to the US imposing tariffs.

BREAUX: Well, the way it would work, we don't want to have a carbon dividend program in effect in the United States trying to protect the world environment by cleaning up the climate issues – and yet have countries that don't have a similar type of program to reduce their carbon emissions, or be able to export their products into the country and to our country, without having to pay a similar fee. So, what we would do is just say that once our carbon dividend fee is established, that any country that doesn't have a similar type of plan to reduce their carbon emissions – that if they're going to export a product into the United States that has produced carbon emissions in the manufacturing of that product – that they would have to pay a similar fee if they're going to sell those products in the United States. I think it's fair we're not doing something unilaterally but trying to get all the countries of the world working together under our plan.

CURWOOD: Democrat John Breaux represented Louisiana for more than three decades in the US House and Senate. Thanks so much for taking the time with us today, Senator.

BREAUX: Hey, Steve. We enjoyed it. Let us stay in touch and continue to talk.