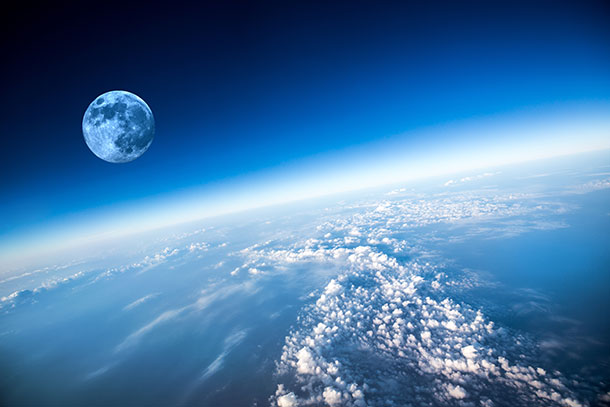 More than 30 years ago, the nations of the world agreed to the Montreal Protocol, which cracked down on chemicals that deplete the upper level ozone layer that protects Earth from dangerous ultraviolet rays that can cause skin cancers. But now emissions of these chlorofluorocarbons are on the rise again. Washington Post Reporter Chris Mooney spoke with Host Steve Curwood about the evidence that suggests industry in East Asia is the culprit.

CURWOOD: The Ozone Hole used to be an issue from the past. Nations of the world came together over 30 years ago under the Montreal Protocol to crack down on chlorofluorocarbons, or CFCs, chemicals used for refrigeration and foam manufacturing. Trouble is, when CFCs escape in the air, they rise up and rip holes in the thin layer of stratospheric ozone that protects us from ultraviolet radiation that can cause skin cancers. So, the Montreal Protocol mandated alternatives that don’t deplete the ozone layer, and for years the ozone holes have been healing. But recently NOAA found that CFC levels are on the rise again. Chris Mooney is an environment reporter for The Washington Post. Welcome to Living on Earth, Chris!

MOONEY: It's great to be here.

CURWOOD: So, how important is the health of the stratospheric ozone layer to the well-being of the planet and those of us who live on it?

MOONEY: It's vital. It's one of the vital parameters of the planet. And it's also, I guess, symbolic in the sense that humans, through incredible ingenuity, created these substances that didn't exist in nature and that were really powerful and durable, which they needed to be because of the role that they were going to play in the industrial applications they were intended for. Wow, we made them so strong that nothing destroyed them until they reached the stratosphere way, way above our heads. And it was only there that they could be destroyed, and when that happened, they created a chain reaction that destroyed ozone and, in turn, endangered us. So, it was this symbol of the incredible reach of human industry and its ability to have unintended effects that reverberate around the whole planet.

CURWOOD: And recently you reported on this mysterious rise in emissions of the ozone destroying chemical CFC-11, and where they might be coming from. What caused the NASA scientists to look into the rise of CFCs in the first place?

MOONEY: Well, what's actually happening here is that in pursuit of the agreement of the Montreal Protocol, there's monitoring going on all the time as scientists attempt to ensure that the chlorofluorocarbon levels are declining as expected. 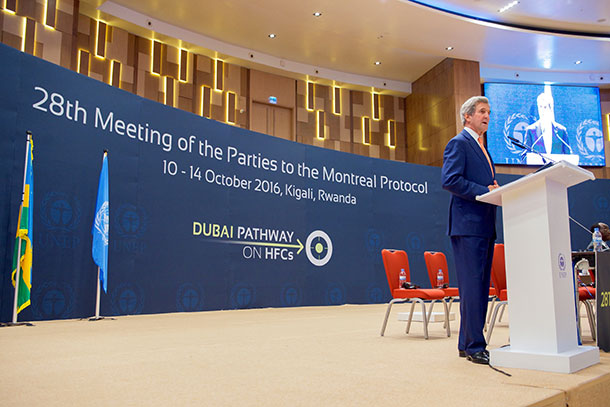 Former US Secretary of State John Kerry delivers remarks during a plenary session of the conference about amending the Montreal ozone layer protection protocol held on October 14, 2016 in Kigali,Rwanda. (Photo: By U.S. Department of State from United States [Public domain], via Wikimedia Commons)

CURWOOD: So, in other words, Chris, these are cops on the beat making their usual rounds keeping track to be sure that all the doors were metaphorically locked for ozone depletion – but in this case apparently they're not so locked.

MOONEY: Exactly. So, one of the numerous gases that was phased out and then later banned under the Montreal Protocol – CFC-11 it's called, or Trichlorofluoromethane – scientists noted that it wasn't going down as they would expect as the molecule gets destroyed in the stratosphere. It wasn't going down as fast as they expected for about a decade between 2002 and 2012, and then it started going up. At that point, they were pretty concerned because that kind of behavior needed to be explained.

CURWOOD: Yeah, I mean, how surprised were they to see this rise?

MOONEY: To hear them talk – I've got some quotes in my story about this of the genre of “this is a really shocked scientist.” I forget the exact words, but this is not something that you see every day. It's not what should happen under the Montreal Protocol, and there's not any obvious immediate explanation for it. So, they had to go and start trying to test possible explanations, and in the course of ruling things out, they were left with the conclusion that probably somebody is making it.

CURWOOD: So, what are the prime suspects of folks who could be making this stuff again?

MOONEY: Well, they were only able to say that it seems like it's coming from east Asia, and they were able to say that because some of the atmospheric measurements are taken in Hawaii, Mauna Loa Observatory, which is sort of famous because that's where they also measure atmospheric carbon dioxide. And essentially they were finding concentrations of CFC-11 mixed in with other gases that they said were characteristic of an east Asian source.

CURWOOD: So, I'm looking at a map of east Asia. The biggest country there is China.

MOONEY: Yes. And for population and for industry, etcetera, they're much larger. So, first of all, you would expect there to be existing… – you know, as I said, not all CFC-containing substances have been destroyed or retired, etcetera. There are some that still could be broken down, recycled, put in a landfill, lead to emissions. You would expect most of those probably to be in the biggest country too. But scientists don't think that it's just the retirement of old appliances and old buildings that is leading to this.

CURWOOD: So, the use of these chemicals is not permitted under the Montreal Protocol and the various things that have been added to it. What's taking place in terms of enforcement to minimize this type of problem?

MOONEY: Well, I think the first thing that happens is that the scientific panel of the ozone treaty – the Montreal Protocol, which is implemented by the United Nations Environment Agency – is going to be vetting this very closely. And then the question is, what do they do if they find a source? Without a source, there's no enforcement, so they have to do still more data gathering first. And if they find a source of new emissions, then I think it really becomes a diplomatic question, and officially, countries are not… nobody’s reporting this production. So, what would happen if this production is occurring in some country that's not reporting it? Presumably it would not be something that the country actually wants to happen – that's a presumption – but it's something that's happening outside of their control. And so all the other countries would lean pretty heavily on that country to make it stop.

CURWOOD: So, what if somebody says, hey, this Montreal Protocol thing isn't working. What's the right answer based on the facts as we know it right now? 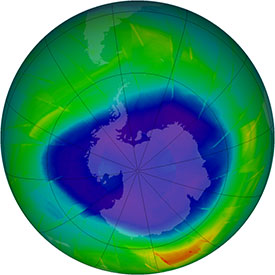 This composite image depicts ozone concentrations above the Antarctic in 2009 in Dobson units, with purple and blues regions depicting severe deficits of ozone. While atmospheric ozone continues to recover, the rise of CFC-11 hampers that progress. (Photo: NASA Goddard Space Flight Center, Flickr CC BY 2.0)

MOONEY: That seems like that would be too far. In fairness, it is one of the first really big questions being raised about what was seen as sort of the most powerful, most effective environmental treaty that we had. And this does definitely lead people to say, OK, maybe it wasn't what we thought. But what I'm hearing is, no, that doesn't seem to be justified conclusion yet, because now is the moment when the Montreal Protocol would actually kick into action. So, if they don't find the source, if they aren't able to make the source cease, then I think you would question it. But what I'm hearing is that just the fact that they detected it, gears are turning to create action, shows that the protocol is acting in the way that it's supposed to.

CURWOOD: Chris Mooney is a reporter for The Washington Post. Chris, thanks so much for taking the time with us today.

MOONEY: Great to talk with you.

CURWOOD: After we spoke with Chris, the New York Times published a story suggesting foam insulation makers in China are the likely sources of CFC-11 emissions.
Montreal Protocol officials have yet to comment, with the next meeting of its noncompliance committee scheduled for July 8th in Vienna, Austria.


Washington Post | “Someone, somewhere, is making a banned chemical that destroys the ozone layer, scientists suspect”

New York Times | “In a High-Stakes Environmental Whodunit, Many Clues Point to China”