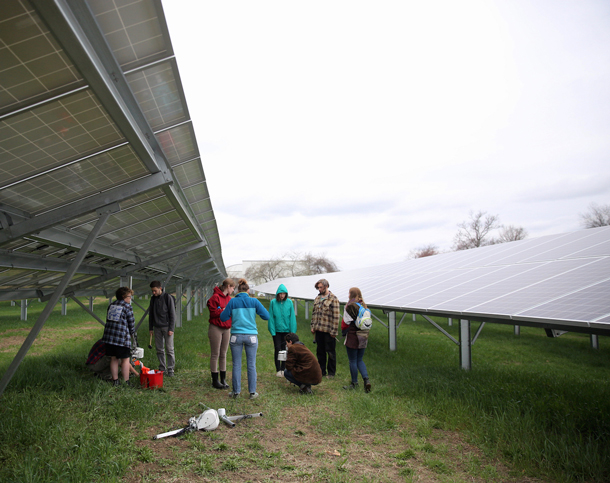 Hampshire College is the first residential U.S. college to go 100% solar for electricity. The 19-acre solar panel array was built on part of the campus’s open agricultural land. (Photo: Courtesy of Hampshire College)

CURWOOD: Colleges and universities are among the institutions leading the way on fighting global warming, and the first residential campus in the U.S. to go 100 percent renewable for its electricity was Hampshire College in Western Massachusetts. Hampshire was founded as a counter-culture school in the 1960’s with optional ‘do your own thing’ courses designed by students and a strong environmental focus. Indeed, the school mascot is a frog, atonement, legend has it, for wetlands drained for the first buildings. A few years ago Hampshire College recruited former World Resources Institute head Jonathan Lash to be its president, and his tenure has seen everything from net zero energy buildings to a 19-acre solar-power system. Jonathan Lash joins us now, welcome to Living on Earth!

LASH: Thank you. Glad to be here.

CURWOOD: Tell us, how is Hampshire College going 100 percent solar for electricity?

LASH: We installed 19 acres of solar collectors, about 15,000 panels, and those panels will produce 4.7 megawatts of power a year. That's more than the college uses. We’re hooked up to the grid, so in the dark of night, in the middle of winter, there is still power flowing to all our students' devices, but on a July day we'll produce a lot more power than we'll use, and that means on an annual basis we’ll produce more power than the school uses.

CURWOOD: Nineteen acres. Now, the cynics would say what about all those trees that had to die for the solar array? 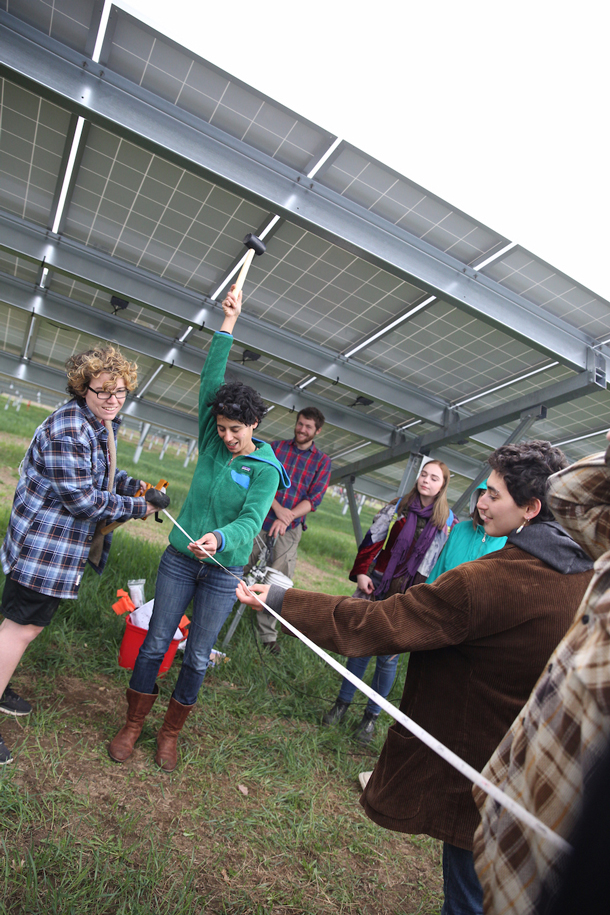 LASH: That's a really interesting question actually, Steve. Our students were deeply involved in selecting the sites. We have an 800-plus acre campus, and a lot of it is agricultural land, fields that we mow for hay, use to grow vegetables, and we ended up choosing to use open ag land so we would not have to cut trees, and we have a group of students who have been doing research with one of their professors to determine whether, in fact, installing collectors has any long term, negative impact on that land.

CURWOOD: Hey, what do 19 acres of solar panels look like?

LASH: It's pretty hard to see them because they're set back on agricultural fields. They're not in your face. We had a committee of students, faculty, and staff who worked with our neighbors to assure we took their concerns into account, and one of the results is that the fields of panels are pretty well screened from the road, from nearby homes. It's a big expanse of large, reflective panels. If you look down on it from the air, it would attract your attention. If you look over at it from next door, you wouldn't see it.

CURWOOD: So, how does the solar energy system there at Hampshire College compare with what other colleges and universities are doing?

LASH: This is a great story that people don't know about. There are a lot of colleges and universities around the country who have decided to just get on with it. Some of their systems are bigger than ours. We're pretty proud that we decided to go 100 percent and that it's a little, not very well-resourced college out in snow country that's able to do this.

CURWOOD: So, let's talk about the economics of your switch. How much did it cost you upfront, and over the long term what do you think the economics will be?

LASH: We've contracted with SolarCity. SolarCity is paying to install the panels for us. We supplied the land, and we've signed a contract to buy all the power coming from the panels. We pay them a little over six cents a kilowatt hour. If we buy the electricity from the grid, we pay about thirteen and a half cents a kilowatt hour, so it's a big savings. And in the evening in winter, when our utility experiences peak demand, we pay over 30 cents a kilowatt hour, so the installer, Solar City, has supplied us with a bank of Tesla batteries that enable us to rely on the solar power stored in the batteries, rather than buy expensive power on an evening when everybody is using electricity. That's good for us and it's actually helpful for the utility.

CURWOOD: And you would pay that 30 cents to SolarCity or to the grid folks?

LASH: We pay that to the grid folks. If we buy power from them, we pay them. If we sell power to them, they pay us. 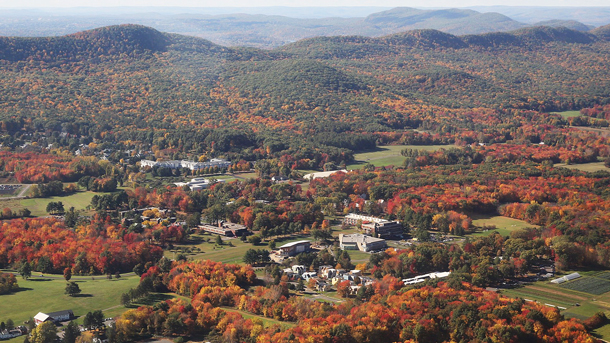 CURWOOD: We should mention by the way that SolarCity is an underwriter of Living on Earth. So what set this plan in motion?

LASH: Well, my background has been as an environmental advocate for the last 40 years, and when I got to Hampshire, the school was already thinking about how to become greener and had in place a commitment to reduce its greenhouse gas emissions. We took a look in 2012 at whether we could install solar, and it looked too expensive. Now, we looked again in 2015 and the price had come down so much, the efficiency of the panels had gone up so much, that we were able to move forward and have it be an overall savings rather than an expense for the college. We would do this just for economic reasons, but there are a lot of other reasons as well.

CURWOOD: How do you think the Hampshire College is going to benefit now from this switch?

LASH: The most important aspect of this for us is as part of the curriculum. Students were involved in every part of the decision, from the research that determined that, in fact, we were going to save money, to the choice of a contractor, to the selection of a site, working with neighbors, and now overseeing the management of the system. This is the challenge that our students and every other student is going to face in the next 20 years, how to turn the US economy into a low carbon economy, and they're going to get the real first-hand experience of doing it. So that was reason number one. 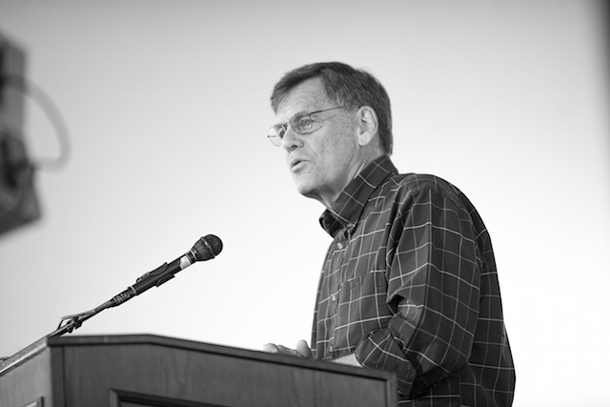 Reason number two is the economic benefit. We'll save $8 to $10 million dollars over the life of this system for Hampshire College. That's a big deal. It's really important.

Third reason is it's just the right thing to do in an era of accelerating climate change. This keeps the jobs local. It means that there are no pipelines being built through people's communities to get power to our college, and it helps, in the best way that we can, to avert climate change, the costs of which are falling most heavily on the poorest, most vulnerable people.

CURWOOD: So, Jonathan, hey, congratulations on putting all this together, using the sun.

Jonathan Lash is the president of Hampshire College. Thanks so much for taking the time with me today.

LASH: It was good to be with you.

Jonathan Lash, “Accepting The Challenge For Climate Action” in The Huffington Post