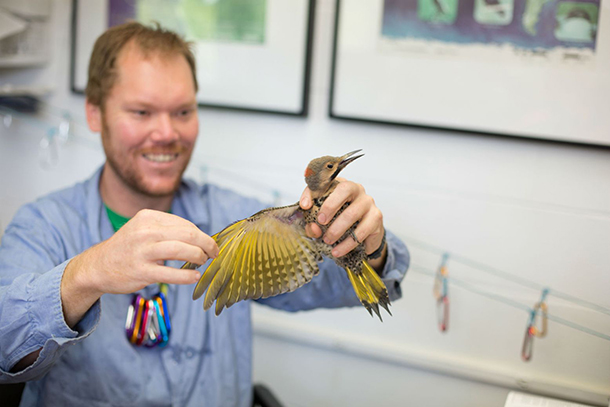 Avian research coordinator, Luke Degroote, examines a Northern Flicker at the Powdermill Nature Reserve. The Flicker and other local birds have been breeding earlier in the year and producing fewer chicks.
(Photo: The Allegheny Front)

The early bird, they say, catches the worm. But research from the Carnegie Museum of Natural History suggests that for many migrating birds in Western Pennsylvania, the changing climate means that they are arriving and breeding earlier so they don’t miss the insects their nestlings need. And as the Allegheny Front’s Kara Holsopple reports, some birds are adapting well and thriving while others produce fewer chicks.

CURWOOD: Our disrupted climate is affecting many species, and migrating birds are especially sensitive. As the time of spring shifts birds may get out of step with the food sources they rely on to nest and raise their chicks. The Allegheny Front’s Kara Holsopple reports.

HOLSOPPLE: Luke DeGroote is the avian research coordinator at Carnegie Museum of Natural History. And he runs the bird-banding program at their Powdermill Nature Reserve in Westmoreland County. Right now he’s in the thick of spring migration.

DEGROOTE: It’s sort of a bit like fishing, in a way. We put our nets to see what we catch.

HOLSOPPLE: From early in the morning, until about noon, he and a handful of volunteers patrol a series of nets -- kind of like volleyball nets -- that are set up around the property.

DEGROOTE: This is a red-winged blackbird ... I’m going to grab him by the body, and very carefully pull the netting off the tip of the wing.

HOLSOPPLE: Birds like this little guy, with the distinctive red patch on its wing, get caught up in the fine netting, and drop down into a pocket where they’re scooped up by researchers.

DEGROOTE: The red-winged blackbirds tend to hold on tight.

HOLSOPPLE: He’s really clinging on. When it’s finally freed, DeGroote gingerly places the bird into a bag, like a small pillow case, and loops its string to a red carabiner around his neck … Red indicates which size metal band to place on the blackbird’s leg so it can be tracked.

DEGROOTE: I’m heading to three -- if anyone wants to check the edge of the ponds that’d be great. 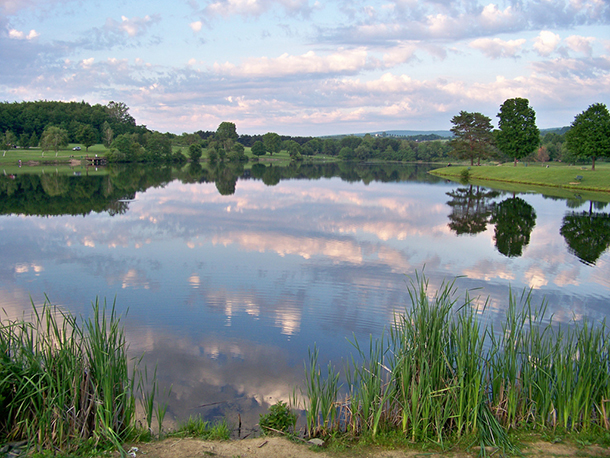 HOLSOPPLE: All the birds they capture this morning -- and every morning -- are taken back to a small lab where they’re banded with a unique number and weighed. Researchers also examine their feathers to determine age, and if the birds are getting ready to breed.

DEGROOTE: The females -- when they’re in breeding condition -- will lose the feathers on the breast and then insert some fluid to create really, like, a hot water bottle for the eggs.

HOLSOPPLE: They’ve been collecting these data here at Powdermill, consistently, for over 50 years. That’s how they know -- from previous studies -- that birds are migrating here a little earlier in the spring than they used to, and breeding sooner. And that got DeGroote and his research partner Molly McDermott thinking.

HOLSOPPLE: So what did you find?

DEGROOTE: YEAH, they're basically getting busier earlier after arrival.

HOLSOPPLE: That’s true for the majority of the 17 common bird species they studied. In their recent paper, published in the journal Plos One, they connect early breeding to warmer springs and climate change. Because while birds are arriving here day earlier for every one degree Celsius that the temperature has warmed over the last few decades, spring buds are opening three days earlier. Those plants and the insects birds rely on for food, for the survival of their young, are now sort of mismatched with the timing of spring migration. So these birds are responding the only way they can. 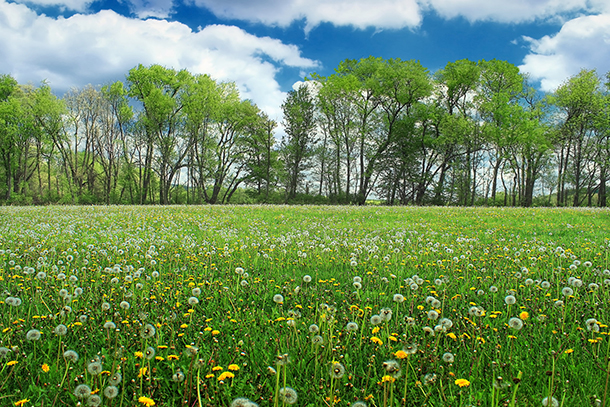 A meadow blooms in Lehigh, PA. Researcher Luke Degroote says while birds arrive a day earlier for every one degree Celsius the temperature has warmed over recent decades, spring buds are opening three days earlier. (Photo: Nicholas A. Tonelli, Flickr CC BY 2.0)

HOLSOPPLE: When the tender plants and insects they eat are at their peak. A quarter of the species which bred earlier in this study -- like black-capped chickadees -- had more babies in these warmer years. But another 25 percent -- including hooded warblers -- didn’t. Their productivity declined.

DeGroote says you can look at the results of this study two ways. On the glass-half-full side, it shows some bird species are flexible, and capable of adapting to climate change. But while weather isn’t climate -- a few years ago there was a hard winter and later spring, this year is warmer -- he says the overall trend for birds is worrying.

DEGROOTE: If it continues to warm that window which they have to be adaptable is shrinking.

HOLSOPPLE: This most recent study just looks at the timing of bird breeding, but DeGroote says it’s easy to see the implications for the ecosystem. If some species are less successful because of climate change, there might be fewer birds to pick off insects or spread seeds from the fruits they eat. I’m Kara Holsopple.