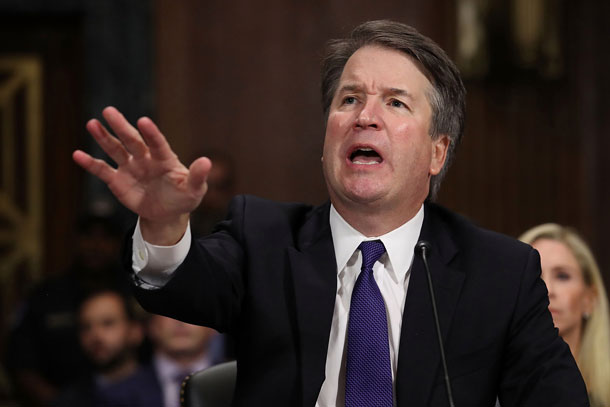 Brett Kavanaugh testifies before the Senate Judiciary Committee regarding claims of sexual assault made against him by high school acquaintance, Dr. Christine Blasey Ford. (Photo: Ninian Reid, Flickr, CC BY 2.0)

CURWOOD: From PRI and the Jennifer and Ted Stanley Studios at the University of Massachusetts Boston this is Living on Earth. I’m Steve Curwood.

With a solid five-four conservative majority now on the US Supreme Court, parties looking to broaden environmental protections under the law can expect plenty of pushback. The bruising and bitter battle to confirm Brett Kavanaugh as the newest associate justice centered more on allegations of sexual assault and temperament than his judicial record. But a close look at Justice Kavanaugh’s rulings during his dozen years on the DC Circuit Court of Appeals reveals strong and well-crafted opinions that restrain government action on pollution and habitat safeguards. To discuss the influence Justice Kavanaugh is likely to have on the high court’s environmental docket, we turn now to Vermont Law School Professor Pat Parenteau. Welcome back to the program, Pat!

PARENTEAU: Thanks, Steve. Good to be with you.

CURWOOD: Now, Justice Brett Kavanaugh has been closely related to a number of environmental cases. Why? Why is that?

PARENTEAU: Well, he's been on the DC Circuit Court of Appeals which is the second most important court to the Supreme Court in the country for going on 11 or 12 years. He's written 300 hundred different opinions of which probably a fourth maybe and dealt with either environmental law directly or administrative law, issues that relate to environmental law. So, he has quite a track record of writing opinions in environmental cases. 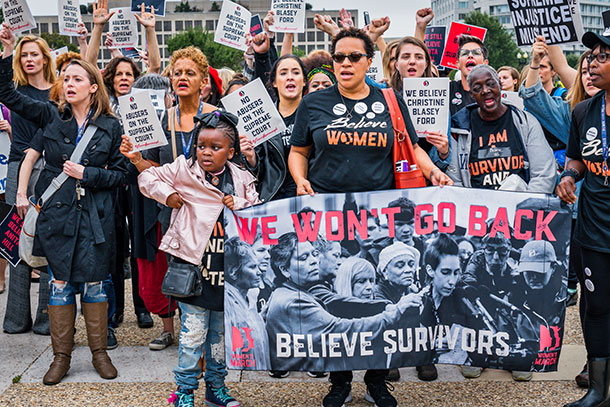 Crowds gathered in Washington, D.C. to protest the confirmation of Brett Kavanaugh to the Supreme Court. (Photo: Mobilus in Mobili, Flickr, CC BY-SA 2.0)

CURWOOD: So, typically how has Justice Kavanaugh ruled on these regulatory cases involving environmental law?

PARENTEAU: Well, he styles himself in the manner of the late Justice Scalia who was a textualist, a strict constructionist, and what that means of course, is that he looks to the text of a statute when he's asked to interpret it, and if the text isn't clear enough oftentimes he will rule against an agency's interpretation. And then in an environmental arena that oftentimes means that rules which are trying to increase the level of protection for public health and the environment don't often fit squarely within the plain text of a statute. The statutes are general and vague. Often agencies try to interpret them as best they can. Kavanaugh is one of those judges that requires really clear explicit direction from Congress when it comes to rules that impose costs on American businesses. He's quite pro-business and he's quite strict when it comes to interpreting environmental laws against broad protections.

CURWOOD: So, what's an important or an outstanding case that Brett Kavanaugh has ruled on regarding the environment from his perch in the Circuit Court of Appeals?

PARENTEAU: Well, he recently ruled that EPA does not have the authority to require a substitute chemical that's used in refrigerants and fire prevention devices that is a very potent greenhouse gas. The chemical was adopted because it doesn't deplete the ozone layer, so it was one of these non ozone depleting chemicals, but the problem is that it's a terrible greenhouse gas, and EPA tried to say, well, we're not going to substitute a greenhouse gas for an ozone-depleter, let's find a different chemical. Kavanaugh looked at the language of the Clean Air Act and said, no, it's limited, EPA's authority is limited to substituting one ozone-depleter for another, but it can't take climate change into account when it looks at alternatives. That's kind of a convoluted case, but that's an example of a very strict approach to interpreting the law, the net result of which is that they're very virulent greenhouse gas is now on the market that was supposed to be a remedy for ozone depletion, but now it's going to cause climate change.

CURWOOD: And what does this do to the balance of the high court in your view?

PARENTEAU: While it solidifies the conservative wing with the Gorsuch section Kavanaugh appointments, it's now clear that on any of these really close statutory questions, constitutional questions, the balance of the power on the court which we've seen a number of times - the Massachusetts vs EPA case ruling that greenhouse gases were a pollutant under the Clean Air Act was a five to four decision - there have been any number of really important five to four decisions involving environmental laws, and now that conservative wing that strict approach wing is in control, solidly in control for at least a generation.

CURWOOD: So, which environment related cases are coming to the High Court in the near future, and how do you expect Justice Kavanaugh to vote, to rule in those cases? 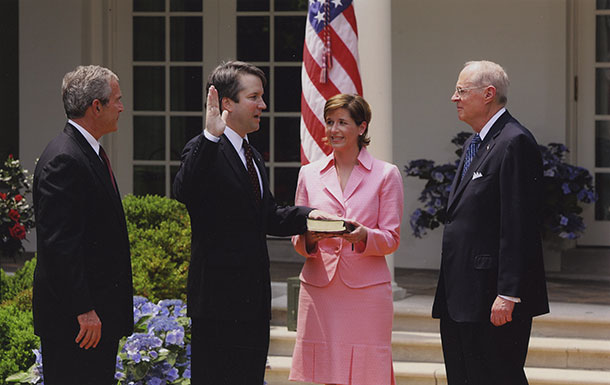 Kavanaugh is sworn into the D.C. Circuit by Justice Anthony Kennedy in 2006. Kavanaugh served as a judge on the D.C. Circuit for 12 years where he encountered many cases regarding the Clean Water Act and Clean Air Act. (Photo: whitehouse.gov, Wikimedia commons, public domain)

PARENTEAU: They have a very important Clean Water Act case pending. It's out of Hawaii, and it involves the underground injection of sewage which then gets right into the ocean waters, and the question is whether or not when you inject the waste into groundwater which then goes into the surface water, does that require a permit? The Ninth Circuit said yes, the county of Maui in Hawaii has asked the Supreme Court to review it, it will probably come up in the next what they call a conference of the justices coming up very soon, and now that Kavanaugh's there he'll have a chance to vote to review it. It's exactly the kind of case where the question is going to be, how broadly do you interpret the reach of the Clean Water Act, you interpret it narrowly to mean there has to be a direct discharge of the pollutant to the surface water or can it also include an indirect discharge via groundwater. So, it's it's a classic case where you can expect Kavanaugh to rule against a broad interpretation of the Clean Water Act.

CURWOOD: What does a confirmation of Justice Brett Kavanaugh mean in terms of the United States dealing with the threat of climate change global warming in the years ahead?

PARENTEAU: Oh, I think we have to be realistic. If we're going to make any progress on climate change in the United States, it's going to have to come through the legislative process and that, of course, means a change in the makeup of Congress both the House and the Senate. Under the current majority, there really is no realistic hope, I don't believe, of meaningful action on climate change. It's going to take a major change in electoral politics in the United States. We may begin to see some of that in the mid-term elections in November. Frankly I hope we do, but time is short and I don't think we can rely on the courts in the United States right now to deliver the kind of relief we need.

CURWOOD: What can you tell us about the youth climate lawsuit against the federal government?

PARENTEAU: Well, the good news on that front is that despite the desperate, really, efforts of the Trump administration to stop the trial, it is going to start on October 29, and it is going to take several weeks of testimony. The plaintiffs in the Juliana case our children's trust case have come up with a stellar group of experts, scientists, economists, technology experts. So, they have a very strong powerful case to present. We haven't seen what the Trump administration is going to present by way of a case because they've been desperately trying to run away from this trial and not show up. 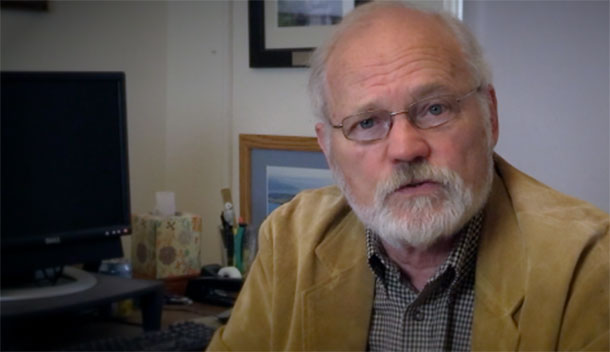 But I don't think there's any way for them to escape. So, we're going to see some pretty dramatic testimony in a court of law solidifying the need for immediate action, and it's coming at exactly the right time with the elections coming up, the 2020 elections right around the corner, I think we're going to see for the first time a really robust cross examination tested evidence of what exactly we need to do and how we can do it. The important thing of course is not how bad is the situation, but are there solutions. Can we actually accomplish the things that we need to do, and the answer to that is yes we can. If we get busy right away and work as hard as we can, we can do it, say many many experts. So, the trial I think is going to be a showpiece of what we can do and must do.

CURWOOD: Let's say that the youth climate lawsuit against the federal government prevails at the trial level. What chance is there that a ruling from the lower court saying that the government has to act would be upheld by the present Supreme Court we have?

PARENTEAU: Well, I suppose conventional wisdom would say the odds are against that. I think you could probably look at maybe winning in the Ninth Circuit, but it's hard to see five votes for some of the theories that the youth plaintiffs are advancing that there's a constitutional right to a sustainable climate. The current state of the law is not what we need and not where we need to be, and it may well be that this unprecedented threat of climate change will itself change the law. It's certainly a Brown versus Board of Education moment in our constitutional history. Maybe the Supreme Court even as conservative as it is would be up to that. I suppose you could say it's doubtful that it is, but on the other hand, nothing ventured nothing gained. I think I'm at the point and a lot of frankly law professors and lawyers are at the point of saying we don't have any other options. We've got to push this argument as far as we can possibly push it and hope for the best.

CURWOOD: Pat Parenteau is a professor at Vermont Law school and this fall a Fulbright fellow. Thanks so much for taking the time with us today.

PARENTEAU: Thanks, Steve, I enjoyed it.