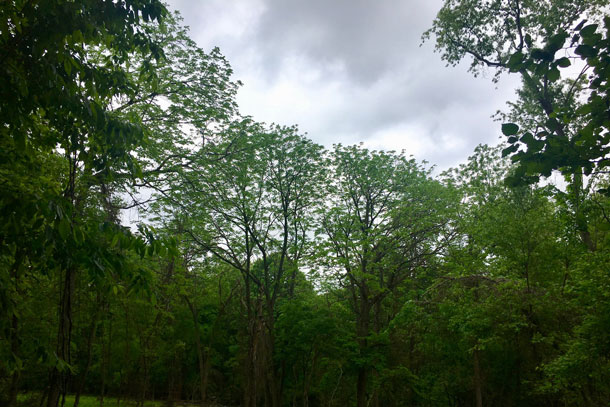 Butternut trees, also known as white walnuts, used to be abundant in the forests of the Northeast and the Midwest, but have now been devastated by a fungus. As the Allegheny Front’s Andy Kubis tells us, help for this struggling species may soon be at hand. Ecologists in Pittsburgh, Pennsylvania recently found a small group of healthy butternuts and are studying how these hardy trees resisted the fungus.

CURWOOD: Butternut trees are sometimes called white walnut trees, and yes, their nuts are delicious. They are common across the eastern US, but now they are now threatened by a deadly fungal disease. In some areas it can be hard to find one that’s not already affected. And that is why ecologists at the Pittsburgh Parks Conservancy were so excited by a recent discovery in a local park. From the Allegheny Front, Andy Kubis has our story.

KUBIS: The forest behind the Frick Environmental Center is lush. But walk about 500 feet along the Clayton Hill trail and you come to a clearing.

JUDITH: It looks a little bit shocking when you first see it ... every open space you see there used to be a tree.

JUDITH: This is Judith Cook. She coordinates volunteer landscape projects for the Pittsburgh Parks Conservancy. Cook worked on a restoration project in this area of the park all winter. The original plan was to get rid of a giant stand of invasive honeysuckle that had taken over.

JUDITH: This whole area, you couldn't see anything. It was just really a wall of Honeysuckle. It was so crazy.

KUBIS: The honeysuckle in this patch of forest likely escaped from someone’s yard and had been growing, unchecked, for about two decades. But once it was cleared, the parks staff found a pleasant surprise.

Ten strong, full-grown butternut trees. Cook stands in the clearing and points up to one.

JUDITH: So here’s a perfectly healthy butternut, that I’ve never really seen before in Pittsburgh parks. Growing perfectly fine in our woodlands, the way they’re supposed to.

KUBIS: You rarely find a healthy butternut because of a deadly, exotic fungus that causes a fatal disease called butternut canker. In some states, 80% of the butternuts have already died.

The trees - also known as white walnuts - used to be widespread in Pennsylvania’s forests, and their nuts are an important food source for wildlife. When a butternut gets canker, it develops an oblong -shaped abscess that oozes. The wounds eventually cut off the tree’s nutrient supply, and it dies. According to the Parks Conservancy, every butternut in Frick Park shows symptoms of the disease – except for these newly uncovered ones. That’s why it’s such an important discovery.

JUDITH: There are just so many threats to our native trees that seeing trees that are not diseased, that are withstanding something that is spreading throughout the country and taking out entire species -- that is a big deal to us.

I’m not sure if it’s such a big deal to the public though. 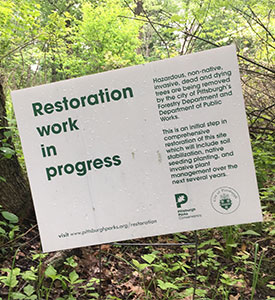 Restoration of these native trees led to the discovery of 10 healthy trees within Frick Park. (Photo: Andy Kubis)

KUBIS: What’s your best guess for why these don’t have canker?

JUDITH: We don't really know why they don’t have canker. The reason why we’re interested in them is we are interested in their genetic makeup. We want to see if they are maybe not susceptible to the canker or just a little bit stronger than other butternuts.

KUBIS: The healthy butternuts will be closely monitored for the next couple years for any signs of the fungus. If they remain canker-free, parks staff will collect their DNA and add it to a genetic database of the city’s strongest trees. And they’ll also grow new trees that will be used to re-populate this site.

For now, the hard work of forest restoration continues.

KUBIS: Today, there’s a chainsaw to help. But often it’s just a lot of old-fashioned hand-weeding to keep the site free of invasives – like that pesky honeysuckle that is already trying to creep back.

KUBIS: What's next here. What are you going to be looking for and what are going to be doing?

JUDITH: We will continue going out here with interns and with volunteers and with staff and removing as many invasives as we can as they are regrowing, so ideally in two to three years we can start planting restoration trees on the site to start filling in the canopy.

KUBIS: Cook says the project will take at least 10 years. But when they’re done, the tree canopy will be closed - they hope - by a bunch of healthy canker-free butternut trees.

JUDITH: That is like one of the greatest things about Pittsburgh, that we are so green. And we have so many parks. So it's really important to preserve them and make them stronger.

CURWOOD: That story from Andy Kubis comes to us courtesy of the Allegheny Front.