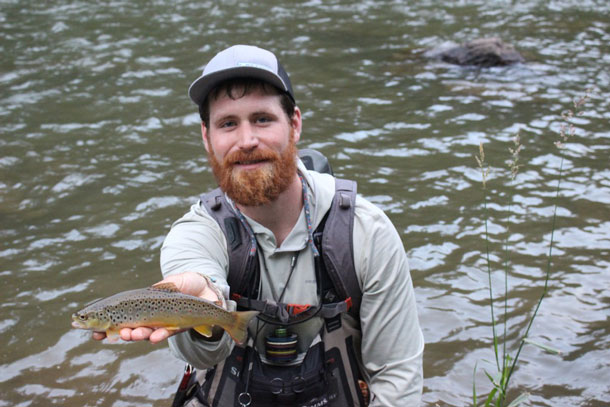 The trout in Central Pennsylvania’s waterways face pollution from agriculture and development. But as Allegheny Front Reporter Julie Grant explains, this area still has some great fly-fishing, and passionate, local conservationists are working to keep it that way.

CURWOOD: The wilder parts of the American West are famous for fly-fishing, but there are a lot of spots to catch wild trout in the Eastern U.S. including central Pennsylvania.
And that’s despite pollution from agriculture and development. Julie Grant of the Allegheny Front went to meet some of the people who are working to keep those premier streams clean.

GRANT: It’s just before sunset, and 27-year-old Matt Kowalchuk is standing in the river, near the bank of Penns Creek in central Pennsylvania, not far from State College. He’s a fly-fishing guide, and chooses a lure meant to catch wild trout.

KOWALCHUK: We’re going to see if we can get one to eat a stonefly, It’s hard to pass up a big meal.

GRANT: Kowalchuk attaches the fly to his line, and walks deeper into the center of the fast-moving creek. He casts upstream. His line doesn’t dance through the air like in A River Runs Through It, but the lure lands lightly on the water, and floats down a ways. He doesn’t get any bites, so he pulls the lure out, and casts upstream, again.

GRANT: Kowalchuk considered moving to Montana or Colorado after college, but he loves it here
KOWALCHUK: In the middle of Pennsylvania, mountains all around you, watching the bald eagles chase the osprey for the trout.

GRANT: In high summer, the water is still cool at about 60 degrees. It stays that temperature because it’s fed by cold springs and mountain creeks. Unlike some streams, the state doesn’t stock Penns Creek with trout.

KOWALCHUK: It doesn’t need it, this stream is Class A wild trout water, meaning that it has a naturally sustaining population of fish that does not need us to do anything about. If you come here in October and November, you can walk the stream and find the fish actively spawning, and that is cool to see. 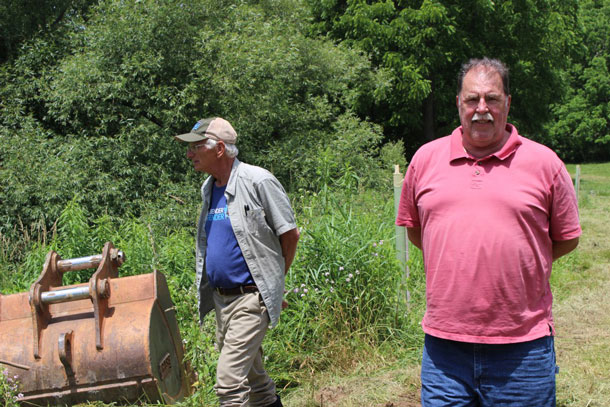 GRANT: One reason the trout do well here is the abundance of food. When I visited, Kowalchuk was just finishing up with the angling frenzy around the hatch of green drake, an especially large mayfly.

KOWALCHUK: That’s the reason that everyone comes to fish, the green drake, It’s actually pretty insane.
GRANT: Even closer to State College, in nearby Spring Creek, a spill of cyanide at Penn State in the 1950s wiped out the green drake population. The mayflies have never recovered there. There’s usually not one big pollution source anymore, today, it’s more like death by a thousand cuts. Urbanization and growth in State College, like rooftops, roads and parking lots, cause runoff and pollution in Spring Creek. In the more rural Penns Creek watershed, it’s the farms. One-third of the land here is used for agriculture corn, soy and dairy.

MARTINEC: This is a cow pasture, and that was a cow pasture. David Martinec is working with PVCA, a local non-profit, to restore the streambed at his long time family farm. He points to the high bank on the far side of the creek, where a backhoe is moving hemlock logs brought in for a restoration project.

MARTINEC: When we took the cattle off, the non-native invasive species just grew up , and choked everything out.
The PVCA’s Lysle Sherwin who leads many area landowners on projects like this, says the bare soil of the cow pastures left these stream banks without tree roots for structure.

GRANT: You can see silt from the eroding bank filling up the shallow stream here. Sherwin says this limestone bed is the spawning ground for trout, and the sediment literally smothers their eggs.

That’s why they’re building what’s basically a reinforced wall of logs along the stream.

SHERWIN: It simulates an eroded bank that has structure and function to it, but it’s a built bank, it’s a stable bank.

GRANT: Sherwin has worked on 14 improvement projects like this in recent years, and says the more they do, the more landowners want to try it.

SHERWIN: It’s sort of keeping up with the Joneses. ‘Oh wait a minute, they did that stream project, and it worked for them. And they seem happy with it.’

GRANT: Many of these projects get funding through a United States Department of Agriculture program that’s proposed to be cut in the House version of the 2018 Farm Bill.

Sherwin hopes funding doesn’t dry up, because the more stream restoration the better for the wild brown trout in Penns Creek and for the anglers who pour in to catch them.
I’m Julie Grant.

CURWOOD: Julie Grant’s story comes to us courtesy of the Allegheny Front.


Cabela’s guide to great fly fishing in the Eastern US, including Penns Creek