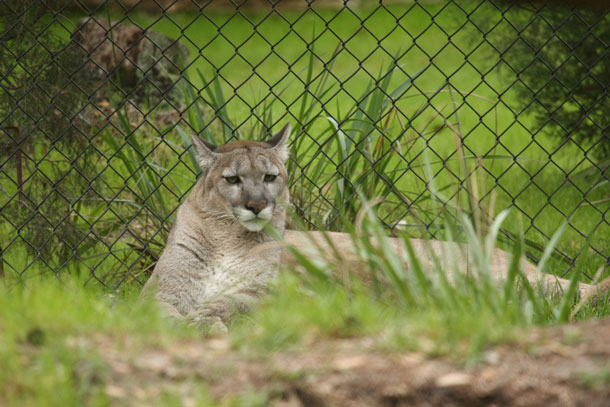 The Florida Panthers (as in, the furry, four-legged ones) have made a comeback in recent years. (Photo: DGriebeling, Flickr CC BY 2.0)

With professional baseball, football, hockey and basketball all active this past week in the United States, Peter Dykstra gives Host Steve Curwood an ecological scorecard for the real and sometimes endangered animals that are mascots for professional sports teams. Also, how some late-night comedians are choosing to poke fun at public perceptions of climate change. And an historical note about three grey whales that rose to celebrity status about three decades ago.

CURWOOD: Hey let’s take a look beyond the headlines now with Peter Dykstra, he’s an editor with Environmental Health News, that’s EHN.org and the Dailyclimate.org on the line now from Atlanta, Georgia. Hey there Peter, what do you got for us today?

DYKSTRA: Hi Steve. We’re going to do something a little different and take a look at sports.

DYKSTRA: Because October is peak season for American sports. The World Series of course, college and professional football are in the middle of their seasons, and pro basketball and pro hockey are underway. It’s probably the best time to point out that some of our favorite sports teams have appropriated vanishing species as their mascots and nicknames. One of my favorites: The Wolverines from the University of Michigan when no actual wolverines have been spotted in the state of Michigan since the mid 1800s.

These teams and colleges make millions on merchandise licensing, on television revenues, on ads and everything else. The same thing for teams named after tigers and timber wolves and of course, the National Hockey League’s San Jose Sharks. But my all-time favorite are the Florida Panthers, also in the National Hockey League. 23 guys on the Panther’s roster and there were about that many real Florida panthers in the wild in the everglades not too long ago. But some good news – the four-legged Florida panthers have rebounded.

DYKSTRA: Ah, not in this analogy. But why can’t most of us care about species rather than just the teams named after them?

CURWOOD: Hey, what else do you have for today?

DYKSTRA: Well a little humor, because climate change, as we all know, is as hilarious as it is widely covered by TV news.

CURWOOD: You mean Peter, it’s neither one.

DYKSTRA: Well a week ago it was both funny and widely covered. Funny because the coverage I’m talking about was on late-night comedy shows. Like this one, where Trevor Noah talked about a new report that says climate change will raise the price of beer.

NOAH: Aw man, they're trying so hard to get people to care about climate change. Right now, because if you tell Americans that in 10 years the Marshall Islands could be underwater, no one cares, but tell them that Corona will cost more now they're marching in the streets, C’mon!

DYKSTRA: Now we’ve got this one from the Late Show With Steve Colbert. Rather than talking about just how unformed the general public is, we go to the White House where he’s misinformed.

DYKSTRA: So if we slap football helmets on all the wolverines and make increased storms, flooded coastlines and all the other climate baggage more humorous, I think we’ll all be okay.

CURWOOD: You know, I think a lot of beer is the way many folks are gonna deal with this one Peter.

DYKSTRA: Well I’ll join you on that.

CURWOOD: Okay, what do you have from the history vault for us?

DYKSTRA: Thirty years ago, throughout the month of October, 1988, we followed along with the saga of three young gray whales that were trapped in the Arctic Ice. Let’s review this, because it’s all a little funny, too. There was a videographer for the well-funded cable TV operation on Alaska’s North Slope.

CURWOOD: Well of course with all the big oil companies there you’d expect them to have the best equipment.

DYKSTRA: Right and they did. The videographer happened upon the three whales just offshore. His pictures prompted a worldwide frenzy, two of the whales eventually escape, even the Soviet Union send an ice breaker all the way over the help the whales, the third one disappears and is presumed dead.

CURWOOD: Eh, how is that funny Peter?

DYKSTRA: Maybe it’s not funny, but ironic because there are an estimated 200 gray whales are believed to die like this every year, but the presence of the mighty video camera made these three literally into Hollywood stars. There was a movie called, “Big Miracle” made about all of this starring Drew Barrymore about 10 years ago. 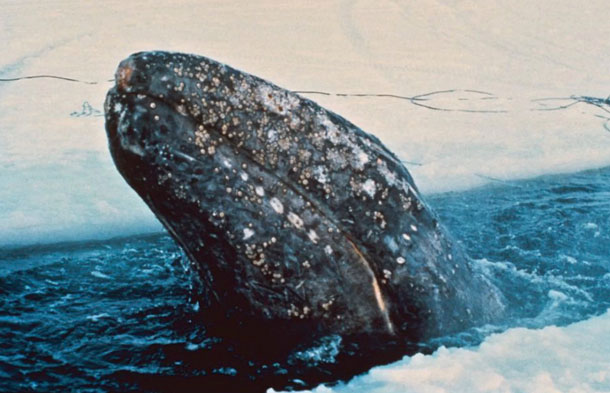 One of the three gray whales trapped in Barrow, Alaska back in 1988. (Photo: NOAA)

CURWOOD: Yeah because it was a whale of a story.

DYKSTRA: Well how about we mark that cliché for extinction.


Peter Dykstra: "What will it take on climate change?"

New York Times | "Climate Change Is No Joking Matter. Except, This Week, It Was."