CURWOOD: It’s the season of Halloween and the Day of the Dead, and that might have people thinking about ghosts and goblins. But for BirdNote®’s Mary McCann it’s the season for owls. And far from spooky the tiny Saw-whet Owl is just 8.5 inches long and weighs less than a stick of butter.

MCCANN: This past summer, a man trying to sleep got really annoyed with his neighbor on the other side of the woods who, he thought, kept backing up a big truck. The next day he grumbled, “What were you doing? It kept me up most of the night!” “Oh, you musta heard the Saw-whet Owl!” the neighbor said.

Named for what, to some, sounds like a saw being sharpened on a stone, Northern Saw-whet Owls are common in forests across southern Canada and the northern US. At this time of year, many move southward, making a large concentration especially in the region of the Great Lakes. 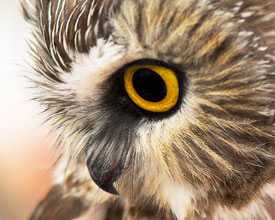 The Saw-whet owl averages eight inches in length, about the same size as the common robin. (Photo: Dave Wendelken)

To our ear, the “advertising” call of the male, made mostly in spring and summer, sounds awfully repetitive. But researchers think female Saw-whets hear variety. See if you can. Here are two males – listen carefully to the pacing of their hoots:

Here’s the second [recorded by G.A. Keller].
Some give a prelude to their advertising call [recorded by T.G. Sander].

In the fall, the birds make a “skew” call [recorded by S. Weidensaul].

And here’s a “twitter” call with a snap of the bill [recorded by W.W.H. Gunn]

Quite a variety for one of North America’s smallest owls, the Northern Saw-whet…

CURWOOD: For photos of the adorable Saw-whet owl head on over to our website, it’s a hoot!

The Saw-whet Owl – The Cornell Lab of Ornithology