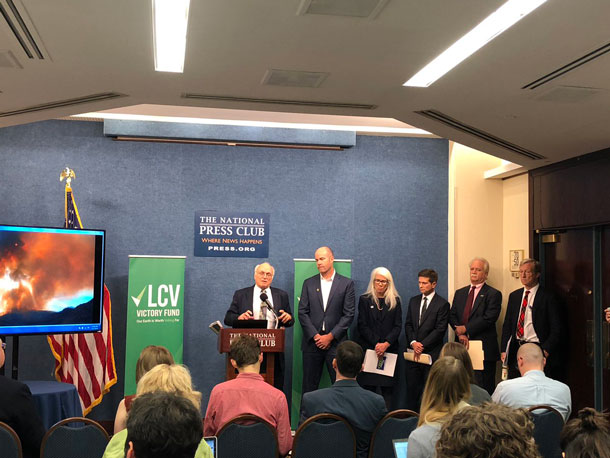 The day after the 2018 elections, some of America’s biggest environmental organizations gathered in Washington D.C. to lay out their priorities for the new Democratic majority in the House of Representatives. First and foremost is oversight of the Trump Administration’s environmental rollbacks and alleged corruption. The big green NGOs are angling for bipartisan, environmentally-minded legislation as well. They’re also celebrating Democratic wins in gubernatorial races and in several state legislatures, and warn the need to act on climate change is more urgent than ever.

The day after the recent elections, some leaders of national environmental organizations invited in the Washington press to hail the end of one-party rule in America, at least for the next two years or so. Big environmental NGOs spent record amounts on the 2018 midterms, with the League of Conservation Voters alone spending more than $80 million. LCV President Gene Karpinski.

KARPINSKI: We stood here 2 years ago and there weren’t a lot of smiles. There are a lot more smiles on our faces today. I think as folks know, we’ve witnessed the last 2 years of the most anti-environmental president in history, and we’ve seen the most anti-environmental congress in history. And the good news is, yesterday the voters said, enough is enough, we need to go in a new direction.

CURWOOD: And part of that new direction includes working with the new Democratic majority in the House to hold the Trump Administration accountable.

CURWOOD: Michael Brune, Executive Director of the Sierra Club took the microphone to push for progress, as well.

BRUNE: We fully expect the House to enact a series of measures on climate change, on climate action, on clean energy, holding polluters accountable, and then put the pressure on the Senate to do the same thing.

STEYER: We’re in a place at the federal level where we have an ability now to be represented in one of the branches of government, but have no ability to pass legislation.

CURWOOD: And he said the lack of progress could be deadly.

STEYER: The UN described not solving the climate problem by 2030 as causing unimaginable suffering. In terms of actually solving the problem – it’s not give it the good college try by 2030, it’s succeed by 2030. We’re very far from doing that and in fact it is unclear to me that we can summon that will without having substantial political victories across the board.

CURWOOD: Democrats not only won control of the Lower House of Congress, but as Gene Karpinski noted, they also gained majorities in several state houses and won more governorships, boosting the movement to cleaner energy to fight climate disruption.

KARPINSKI: 8 Governors, new governors, signed a 100% clean energy pledge. So a lot of progress will continue to happen in the states.

BRUNE: We know that Governors are the ones who make decisions on how Clean Air Act and Clean Water Act and other environmental safeguards that are promulgated by EPA, governors make decisions on how those regulations are enforced. Does a coal plant stay online, or does it move to - is it replaced with clean energy. Governors have a tremendous voice in that question. Do we invest in new fossil fuel infrastructure or do we transition to clean energy? Governors have a big voice in that. Are we regulating the oil and gas and coal industries? Governors play a big role in that as well. 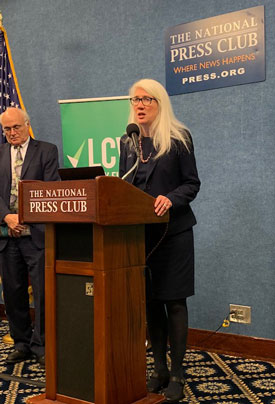 CURWOOD: The Environmental Voter Project has studies that show of 20 million or so registered voters in the US that have the environment in their top two criteria for voting, only about 20 percent, known as “super environmentalists,” actually voted in the 2014 midterm elections. In contrast 35 percent of the general electorate turned out.
The 2018 data is not yet available, but as Wendy Wendlandt of Environment America noted, without more turnout, politicians can continue to discount the environmental movement.

WENDLANDT: We didn't win everywhere. And we know that. And I think that's on us as the environmental community to figure out how to connect the concern we know exists among environmental voters with the ballot box. There was some progress made on that in this election cycle but we need to do more, and we're ready for that challenge as we go into 2020.

Motherboard | “For the First Time Since 2010, People Who Accept Climate Change Control the House Science Committee”