Beyond Gas For Cooking 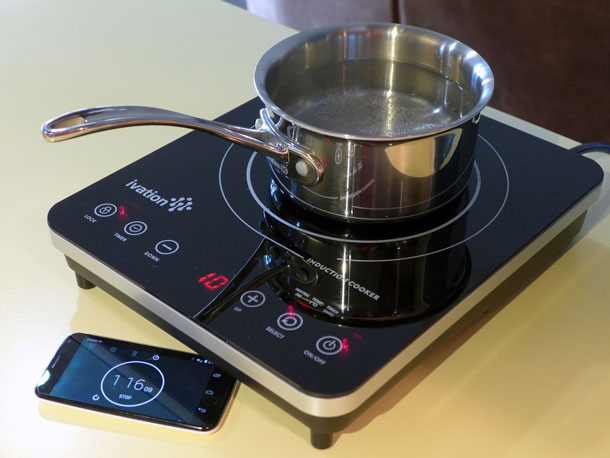 Induction cooktops run an electric current through an electromagnetic coil to generate heat in an iron-containing pot. Any pot that a magnet sticks to will do. (Photo: Kelly Garbato, Flickr CC BY-NC-ND 2.0)

Volunteers are mobilizing to provide a gas-free cooking choice for residents who still remain without gas service two months after the September 2018 natural gas explosions that rocked Massachusetts’ Merrimack Valley. Living on Earth’s Jenni Doering reports on why a group called the Gas Leaks Allies is handing out hundreds of efficient electric induction cooktops to demonstrate options for moving away from natural gas.

Natural gas is booming in the U.S., and proponents say it can serve as a bridge from polluting energy sources like coal to a cleaner energy future. Natural gas is mostly methane, and it does burn cleaner than coal but it is a powerful greenhouse gas in its own right, and it’s prone to leaking. So gas can be bad for the planet and dangerous for people, as residents of the Merrimack Valley in Massachusetts found out earlier this year. On September 13th an over-pressurized gas main caused an explosion that rocked the towns of Lawrence, Andover and North Andover. The explosion made national news.

BASCOMB: One person died in the explosion and several homes were destroyed. The gas utility is still working on restoring gas service to customers before the frigid New England winter sets in. But some see the disaster as an opportunity to help move away from natural gas altogether. Living on Earth’s Jenni Doering reports.

DOERING: Nearly nine thousand Columbia Gas customers lost gas service and the company has offered housing for people who remain without heat as we head into New England winter. They brought in hundreds of trailers and rented thousands of hotel rooms. But others remain without gas for their stoves and hot water heaters. Karen Milton is a member of North Parish Unitarian Universalist church. She’s been working with members of the community to help them cope.

MILTON: People were coming in with babies, there was one woman had 3 little kids, one of them in a stroller, and she was pregnant, and she said, what am I gonna do when it starts to get cold? They talked about using the microwave and a crockpot to get hot water to take a bath, to wash up. It’s just like, I don’t know how they’re gonna, how you stand that for that long. 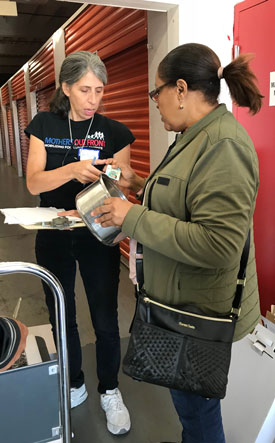 DOERING: And many don’t have a safety net to rely on, says community organizer Ana Javier.

JAVIER: People in our community, here in Lawrence for instance, live paycheck by paycheck. Work to get by.

DOERING: To help low income residents get by, volunteers are offering a unique alternative to cooking with gas: induction cooktops.

VOLUNTEER: OK, so now we need 2 people to be taking these cooktops over to there…

DOERING: At a self-storage facility on Canal Street, among the old red brick textile mills in the industrial heart of Lawrence, volunteers unloaded box after box of portable induction cooktops donated from IKEA.

DOERING: Each slim cooktop comes in a white box no bigger than a briefcase. Induction cooktops have been around for more than a century and have been popular in Europe for years. It’s a relatively simple idea: an electric current runs through an electromagnetic coil, to generate a magnetic field. If you put a pot containing iron on the induction stove, it will convert the magnetic field’s energy into heat. Any pot that a magnet sticks to will do the trick. Ana Javier, who is the President of the Merrimack Valley Project, says the stoves will provide a way to cook while gas is out of commission. 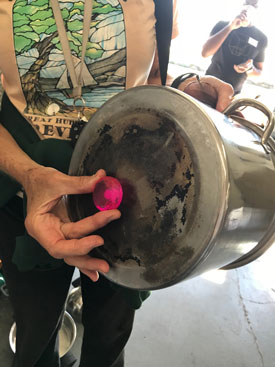 A volunteer uses a magnet to show that a pot is compatible with induction cooking technology. (Photo: Jenni Doering)

DOERING: About 70% of the people in Lawrence are Spanish speakers. Many are bilingual, but Ania Camargo, a coordinator with a gas alternatives coalition called the Gas Leaks Allies, says it’s important to make information about the stoves available to all.

CAMARGO: So we have flyers that need to go into each one of these boxes, so that people know how to use them; and they’re in English and in Spanish.

DOERING: Ania explains to a Spanish-speaking couple about how induction cooking works.

DOERING: They take home a unit, as well as a suitable pot. Giving out induction cooktops to help victims of the Lawrence disaster was the brainchild of the Gas Leaks Allies. They are concerned because while explosions like what happened in Lawrence are extremely rare, gas leaks are common. Older cast-iron gas pipelines corrode and leak easily. Across the country gas leaks are a problem from the well head to the home.
Experts estimate that more than 2% of all the natural gas extracted in the US leaks into the atmosphere. Zeyneb Magavi is the Research Director for a nonprofit called Home Energy Efficiency Team, or “HEET”.

MAGAVI: Gas leaks – one thing about it is it’s unifying, there’s nobody that thinks they’re a good thing. Right? It doesn’t matter if you’re approaching it from, “hey, we’re wasting money,” or, “hey that sounds dangerous,” or the climate. Like whatever you’re approach is, everyone pretty much agrees they’re not a good thing.

DOERING: One solution: use less gas to begin with. That’s where the induction cook stoves come in. Nathan Phillips is a Boston University professor with Gas Leaks Allies. 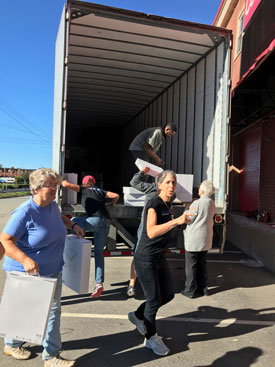 PHILLIPS: And in a weird kind of way the Gas Leak Allies were ready, because for the last year and a half as part of our thinking of pivoting from the gas leaks problem to solutions, we recognized that induction is actually a more precise, more efficient, more powerful way to cook.

DOERING: Induction cooktops are as much as 90% efficient, compared to 40% efficiency for gas stoves.

PHILLIPS: Heat is generated in the base of the pan, and so the heat goes straight into the liquid or the food.

DOERING: That’s good news for cooks who want to save time in the kitchen, says Zeyneb Magavi.

DOERING: So after the Lawrence disaster Nathan and the Gas Leaks Allies started a GoFundMe campaign to provide induction cooktops for residents in need.

PHILLIPS: And from then the donations just started pouring in.

DOERING: Despite the generous donations, some residents are still struggling as the holiday season approaches, says community organizer Ana Javier.

JAVIER: I get emotional sometimes. All I’m thinking about is Thanksgiving right now, and thinking that some of these families, are really not gonna be able to… I, I don’t know if I can actually sit at my table and have a full dinner with my family, knowing that there are kids that are not gonna be able to do that.

DOERING: Columbia Gas recently announced that it will provide Thanksgiving dinner for the affected households. The utility company had planned to get everyone’s gas service restored by November 19th, but the promised date has been pushed to nearly a month later. In the meantime, the Gas Leaks Allies have distributed nearly 700 induction cooktops, and they are working with this community and across the state to help wean off natural gas altogether. For Living on Earth, I’m Jenni Doering in Lawrence, Massachusetts.


InsideClimate News | “After Dozens of Gas Explosions, A Community Looks for Alternatives to Natural Gas”

About the Gas Leaks Allies