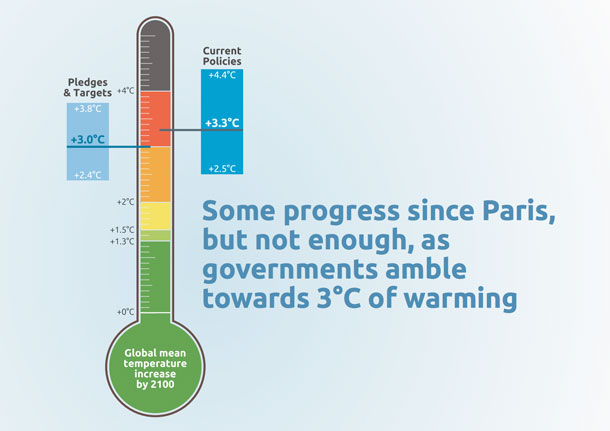 The CAT Thermometer shows the world has a long way to go between current policies and the Paris Agreement goals. (Image: Climate Action Tracker)

The Climate Action Tracker keeps tabs on countries’ progress towards meeting the Paris Agreement goals of limiting warming to 1.5 degrees Celsius over pre-industrial levels or at least “well below” 2 degrees C. Its latest report finds that just two countries, The Gambia and Morocco, currently have policies to meet the 1.5-degree target. The Climate Action Tracker’s Yvonne Deng speaks with Host Steve Curwood about which countries’ pledges are “critically insufficient,” and how India is taking a low-carbon path compatible with 2 degrees. Morocco’s former Environment Minister Hakima El Haite discusses why her country’s history of addressing climate change for decades is helping it meet the Paris goals.

CURWOOD: “1.5 to stay alive” is a rallying cry for island nations at the UN climate talks. In 2015 island states pushed for the Paris Climate Agreement to focus on keeping the Earth’s temperature from rising more than 1.5 degrees Celsius, as even a bit more warming will flood low-lying island nations. And scientific evidence shows that a world that becomes even 2 degrees warmer is far more disastrous for civilization than a world that warms by 1.5 degrees or less. Let’s check in now with Yvonne Deng, a member of the independent group Climate Action Tracker to see which countries are meeting their share of the 1.5 degree goal. She joins us from COP24 in Katowice, Poland, and notes that the tracker ratings take into account the unique situations of each country.

DENG: When you look at the overall emission reductions that we need to see globally, it doesn't mean that every country has to reduce their emissions, right? There are countries that are still developing, they need to be allowed to increase their emissions still from current levels. And there are countries that have already developed and they really need to look at decreasing emissions. And there are various different, actually, schools of thought or approaches to how you share this sort of global emission reduction across different countries. You could think of an approach where you say, well, we should all get to a certain per capita emissions level by a certain date and sort of draw a line between now and then, or you can think of approaches that account for the fact that some countries of course, historically emitted a lot of emissions to further their development. And you could think of approaches which say, well, the wealthy nations would do more. At the Climate Action Tracker, we don't take a pick. We actually use all of the approaches out there and we look at the whole range of possible emission levels per country, in any of these approaches, and then we determine what we call the fair share range of emission reductions, and that informs our rating scale.

CURWOOD: So, which countries are really not doing a whole heck of a lot to meet their commitments under Paris?

DENG: So, the majority of our countries are not quite there yet. But we certainly have a group of countries that we rate critically insufficient or highly insufficient. These include countries like Russia and Ukraine, Saudi Arabia, Turkey. The US is obviously one and this is at the federal level. We need to be very clear that in the US there's a lot happening at state and local level, but at the federal level, of course, we have a lack of action and rather a reversal of direction. Really, all countries could do more to reduce emissions.

CURWOOD: So, now with the U.S. taking a step back, you see China really in the leadership both in the negotiation process and in terms of infrastructure. How does your analysis rate China's progress on meeting the Paris targets?

DENG: The Climate Action Tracker currently rates the Chinese target under Paris as highly insufficient. It's not strong enough, unfortunately. So, they can step up ambition. But the good thing with China is that when they set themselves a target, they also tend to achieve it. China is doing a lot on the ground. They published their 13th five-year plan, which has seen a cap on coal in primary energy; it’s seen a cap on energy demand, and it's got capacity targets for non-fossil power, and they're also doing a lot in roll out of electric vehicles. So, China is certainly doing a lot, and can do more also in terms of coal, which I believe has taken a slightly larger share again in recent years. But I think they can be a leader if they step up and address the coal issue. 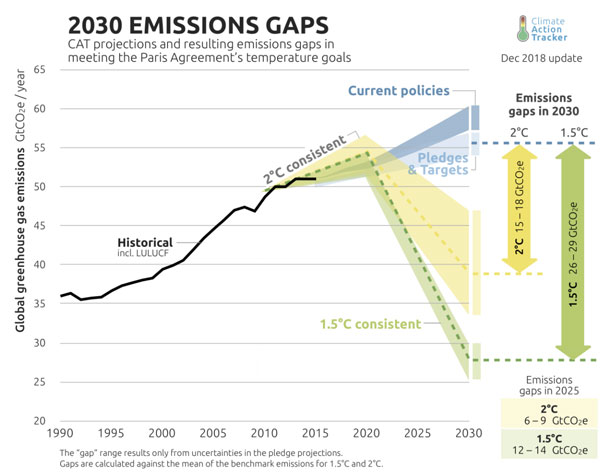 CURWOOD: What about India? How well is that doing?

DENG: I'm glad you mention India. In the group of the big economies that we track, India is really a shining light. They have set themselves a target that we already rate as being 2 degree compatible. If they increase that ambition, they could become the first large economy to be one-and-a-half degree compatible. And they have also put policies in place to really scale up their renewables, and they're thinking about policies on electric transport and others. But India also still is relying a lot on coal, they’re also still thinking of expanding coal and that's something they will have to address.

CURWOOD: By the way, if you go to your website, you see something called the C-A-T, the CAT thermometer. What is that? What does it do?

DENG: So, in addition to rating each of the countries’ commitments under Paris, we also look at these emissions levels they've committed to, and we roll them all up to global level, and then we say well what does it mean in terms of the warming we expect by the end of the century? If countries did what they've committed to under Paris, how much warming would we see? And currently we're seeing around three degrees or so warming by the end of the century with what countries have committed to. We also look at what the warming would be if countries carried on as they're currently planning. So, our warming projections for the current policy trajectory are slightly above three degrees. But the good news is that we have almost all the technologies available that we need for this. Some things we have to figure out. But the vast majority we have, and the challenge really is in getting them out there and getting them scaled up. So this is a political problem. It's a question of willingness to do it. It's not a question of figuring out how to do it technically; that would be even scarier but we know how to do it.

CURWOOD: Yvonne Deng is an associate director at Ecofys, a Navigant company which is part of the Climate Action Tracker. Yvonne, thanks for taking the time with us today.

DENG: Thanks for having me.

Morocco and The Gambia are leading the world with policies that are compatible with the Paris Agreement’s 1.5 degrees Celsius target. (Image: Climate Action Tracker)

CURWOOD: The Climate Action Tracker rates just 2 countries as compatible with
the Paris Agreement target to keep warming below 1.5 degrees Celsius, The Gambia and Morocco. The Gambia just embarked on a six-year, $25 million project to plant trees and restore degraded lands. And Morocco is already close to 40% renewable energy and in a decade more than half will be renewable. The country’s former Environment Minister Hakima El Haite says Morocco has been on a path to a low-carbon economy for decades.

EL HAITE: Since 1964, we had understood in Morocco that we are affected by climate change. And that time our dead King decided to create dams in Morocco, big dams, to store water because he wanted to ensure drinking water to the people of Morocco and to ensure the food security for the Moroccans. So, we began our fight against climate change many, many, many decades ago. And then our King Mohammed VI decided to cut the subsidies on fossil fuel, and now Morocco is choosing green technologies in its investment.

CURWOOD: So, since Morocco is now doing its part to meet the target of keeping things below one-and-a-half degrees Centigrade, how does your country feel about the lack of ambition that we see on climate change from the United States and many other countries at this point?

EL HAITE: I’ll be very frank; when you see that Americans withdraw from the Paris Agreement, I'm not only disappointed, I'm feeling that politicians are not taking their responsibilities. United States was a leading country during the negotiation, and now, as President Trump decided to withdraw from the Paris Agreement, they are still blocking the negotiation. And this is not correct! Africa, the whole of Africa is only four percent of the emissions worldwide. The ones who are impacting the world are the ones who are fuel producers and industrial developers, and those countries should lead the negotiation. I’m thinking about the United States, Russia, China, Europe, etcetera.

So, I'm really feeling as a Moroccan, as an African, as a citizen of the world, disappointed and feeling that those who are blocking the negotiation now are not taking their responsibilities. And many millions and millions of people will die because of this decision.

CURWOOD: So, looking down the road, what kinds of climate impacts could affect Morocco in the years to come?

EL HAITE: Oh, we are already affected. Drought. Desertification. Migration... in Africa, I will tell you, 500 million hectares are degraded because of climate change. Millions and millions of people are migrating and dying in the Mediterranean Sea because of climate change. And those are not things we’re reading in reports, you know? Those are things we are living already. 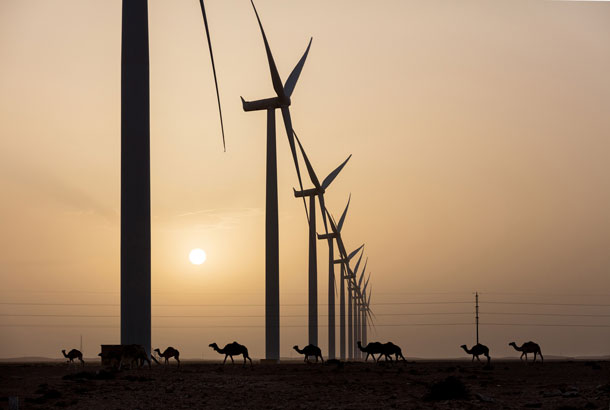 Wind turbines along the Morocco coast, near the town of Tarfaya. (Photo: TEDxTarfaya, Flickr CC BY-SA 2.0)

CURWOOD: Hakima El Haite served as Morocco's Environment Minister from 2013 to 2017, and she's now President of Liberal International. Minister El Haite, thank you so much for taking the time with us today.

The Berlin Declaration On Climate Justice